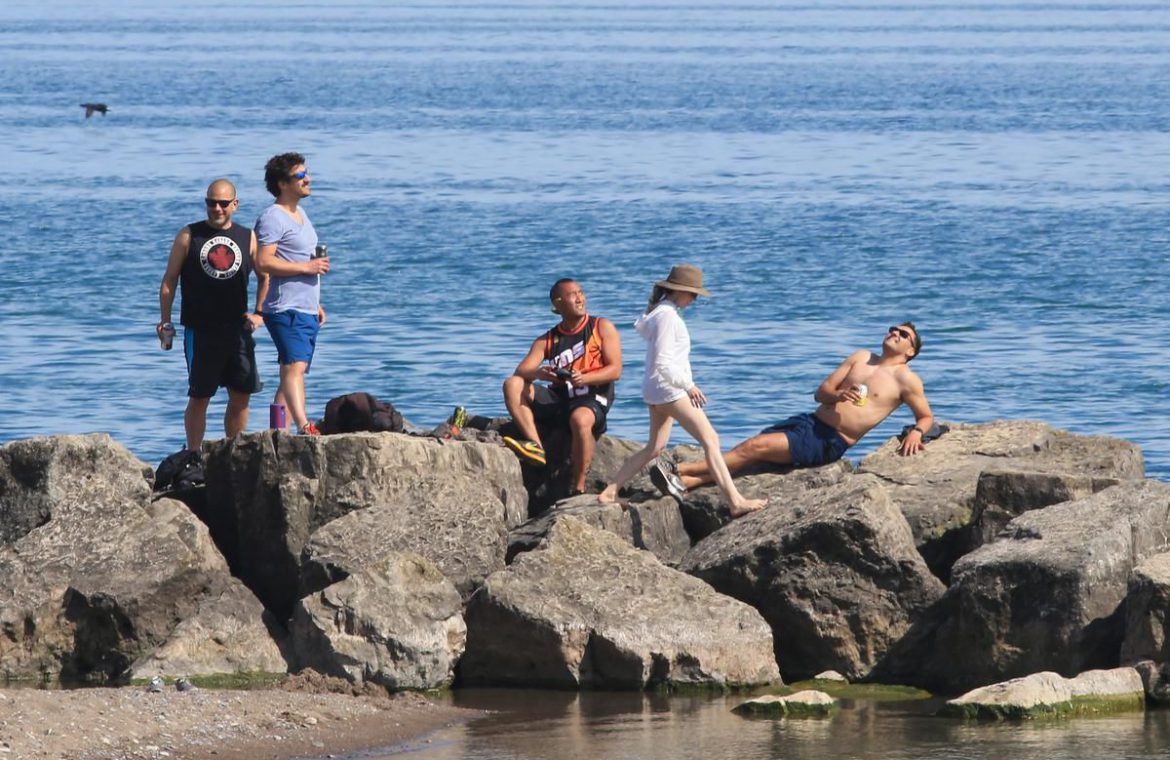 COVID-19 infections in younger people are on the rise in certain hotspots across the GTA and Hamilton, according to provincial data, medical officers and researchers — especially in Toronto and Peel, both of which have seen a recent increase in reported cases among 20-somethings in recent weeks.

Public health units are now investigating this emerging trend to better understand what’s driving this apparent demographic shift in the province’s COVID epidemic, which is now largely centred in the GTA.

While some suspect it could reflect a change in testing patterns, medical officers and health workers are pointing to other factors like workplace outbreaks, housing arrangements and lockdown fatigue coupled with an “invincible” attitude amongst younger people who might feel insulated from COVID’s worst effects — even though deaths and severe outcomes have been reported in these age groups across the province.

“We know for this age group there tends to be a little bit more of a feeling that you may not be at as much risk,” said Dr. Elizabeth Richardson, medical officer of health in Hamilton.

“A hypothesis we’re exploring is that this is the age group that is choosing not to necessarily follow the strong recommendations that we have,” said Peel region’s medical officer of health, Dr. Lawrence Loh.

“I’ve seen a lot of lax behaviours,” said Kendra Leo, an emergency room nurse at Humber River Hospital, who also works as a contact tracer in the GTA. “Typically, if they’re not getting that sick, then it’s not a big deal to them — but the reality is that sometimes they do. I’ve seen people in their 20s who are very, very ill, with no other health problems.”

A Star analysis of publicly available provincial data shows that in the last two months, the percentage of COVID cases grew among people aged 20 to 29 when looking at just cases acquired in the community, a trend largely fuelled by upticks in Toronto and Peel. For example, on April 5, this age group accounted for 14 per cent of all cases province-wide; on June 5, they made up 18 per cent of the total.

This analysis is supported by unpublished research led by University of Guelph engineering professor Ed McBean, who analyzed age trends in Ontario’s daily case counts. McBean’s group found that while the curve was flattening for other age groups, the number of daily cases in under-20s was still rising, especially in Peel and Toronto.

“Whereas if you look at the older age categories, you’d see that they reached their peak predominantly in mid-April, and they’re starting to decline,” said graduate student Brett Snider, who contributed to the research.

In Toronto, people aged 20 to 29 made up 17 per cent of total cases in March, when the epidemic first started taking hold across the province. In May, this group accounted for 20 per cent of total cases that month and in June, they currently make up a quarter of all cases, according to Toronto Public Health. By contrast, the proportion of cases among 30-somethings has remained stable at 19 per cent when comparing March with June.

“We have to make sure we all take precautions,” said Dr. Vinita Dubey, associate medical officer with Toronto Public Health. “Most young people may recover, but not all of them. Some will have severe illness.

“And when they do get sick, they have a chance of spreading it to someone who might not do as well as them.”

Dubey said some of the increase could be related to younger people returning to work as provincial restrictions eased, noting TPH’s earlier observations of COVID-19 workplace clusters. Social interactions could also be a driver, though she said “it’s often hard to pinpoint one particular event that led to someone’s illness.”

Though some experts worried crowds at Trinity Bellwoods Park on May 23 would lead to a spike, Dubey said Toronto Public Health hasn’t drawn that conclusion.

What is clear is that more people can identify the person who may have given them the virus compared to earlier in the pandemic, she said.

“Most people are getting this illness from another person; the interactions they are having, in whatever surrounding, is what is leading to an infection.”

In Peel region, the COVID epidemic has gone through three waves, as it has in many other municipalities, according to Loh. The first, beginning in March, mostly affected working-age people, 20-59 and then as people began to self-isolate, the epidemic moved into seniors residences and long-term care.

Since early May, the epidemic has flipped back into the community — and Peel started to see more infections in younger people, especially in Brampton, Loh said.

A Star analysis of provincial data shows that on April 8, people in the 20-29 age group made up 13 per cent of cumulative cases in Peel; today, they account for 18 per cent.

He believes this uptick is being partly driven by an increase in outbreaks in industrial job sites where younger people tend to be employed.

But he is also comparing his public health data with enforcement data, which shows that younger people might be more prone to flouting the rules and advice around distancing, he said.

In Hamilton, health officials are rolling out a new social media campaign aimed at changing the behaviour of 20-somethings, who now account for 43 per cent of total cases over the last 10 days.

Richardson told reporters at a virtual press conference Tuesday that the social media campaign will “talk more about what (younger people) can do” rather than what they can’t. She said contact tracing in the city suggests 20-somethings are not “fully and consistently” sticking to things like physical distancing, hand washing and wearing a cloth mask, when commuting to work or “when they’re in a recreational or social environment.”

Younger people also sometimes have roommates, she said, and it can be hard to socially isolate properly from them.

One concern with more young people getting infected is that they could unknowingly spread the disease to loved ones who are more at risk, Richardson cautioned. “So one way or another it’s very important to control the spread.”

She added that it’s also important to remember that young people are not immune to COVID’s more serious effects. While Hamilton has yet to see severe outcomes in younger people, there are cases where people’s symptoms “linger” for long periods, she said.

Publicly available data shows there have been three deaths due to COVID-19 in people aged 20 to 29, and 94 hospitalizations across Ontario. There haven’t been any deaths in people under 20, but 20 patients in this age group have ended up in hospital.

At Humber River Hospital, Leo recalls one patient in her early 20s who was a candidate for mechanical ventilation when they transferred her to another hospital’s intensive care unit.

“She called 911 because her lips turned blue and she was in severe respiratory distress,” she said. “She was (otherwise) a healthy, young girl. We’ve had quite a few of those, that just boggles your mind.”

When asked about the rise in younger people, health ministry spokesperson Hayley Chazan said it’s something the province is “keeping a close eye on.”

At a press conference Tuesday, Dr. Barbara Yaffe, Toronto’s associate medical officer of health, said there are “probably a number of factors.”

“I would think part of it is that we’ve opened up testing to people with less severe symptoms, in fact, with no symptoms,” she said. “And so, we’re probably picking up milder cases in young people. They’re probably coming forward for testing where they didn’t before.”

McBean, the University of Guelph researcher, doesn’t think the jump in cases among younger people is due to relaxed testing guidelines — if this were the case, other health units would be seeing a similar pattern, he noted.

According to a new analysis by the #HowsMyFlattening project, a volunteer-driven research group, the uptick in the number of Ontarians aged 20 to 39 testing positive for the virus seems to have accelerated after May 10, Mother’s Day.

Farbod Abolhassani, website development lead for the project and adjunct faculty member at the U of T’s Dalla Lana School of Public Health, said while there is a notable rise in younger people testing positive, what’s driving it is unclear.

“The data is only as good as who is being tested. In the 20-somethings age group, yes there has been a peak in them testing positive. But we don’t know who those people are. Do they work at a factory? Are they health-care workers?”

As Ontario relaxes restrictions, Dubey said it’s just as critical for people to take proper measures as at the epidemic’s peak.

And while Ontario will, as of Friday, allow gatherings of groups of 10, people of all ages need to maintain a physical distance from anyone outside their households, even while wearing a mask, she said.

“Wearing a mask does not give you a licence to keep close to other people,” she said.

With files from Rachel Mendleson

Don't Miss it UK must prepare for riots as anger grows over coronavirus restrictions, says government adviser
Up Next New Orleans will move to Phase 2 of coronavirus re-opening; here’s when, what it includes | Coronavirus