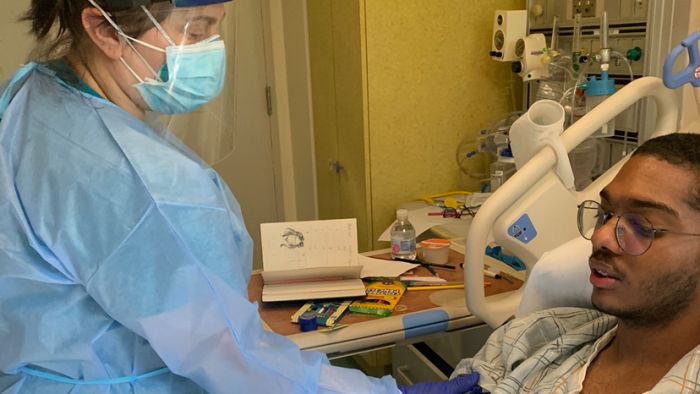 When 17-year-old David Vargas woke one night in May with chest pain he was a little worried at first.

Key points:Many young people are developing MIS-C, a disease linked to COVID-19David Vargas was 17 years old when he was admitted to hospital in New YorkAfter testing positive to COVID-19, he was diagnosed with MIS-C

“I’ve never felt that pain before — it was very sudden and very sharp.”

The healthy teenager had no underlying medical conditions, was fit and active, and played on his high school baseball team in New York City.

He had just recovered from what he thought was a mild flu and shrugged off the chest pain.

“I didn’t want to worry my parents or my siblings,” he said.

“So I laid down for about an hour, an hour and a half, until the pain subsided.

“And I didn’t think about it for the rest of the day.”

But that evening, the pain came back.

“About 8:00pm, when I was eating Cheerios and watching YouTube, the pain came back again,” he said.

“It was then that my parents and I knew that it was best to see a doctor.”

“So I had the ambulance come up and take him to the hospital right away.”

Doctors were concerned and perplexed about why the young, healthy and active man was showing signs of a heart attack.

“The doctors and I had no clue what was happening,” David said.

Numerous tests came back all showing David to be healthy.

But one blood test showed elevated levels of a protein called troponin.

“They said that troponin is found in people who’ve suffered a heart attack,” David said.

“It’s not just terrifying, but a complete shock, because I have never had any medical issues, let alone cardiac issues, and neither has my family.”

After first testing negative for the coronavirus, a second test came back positive, and doctors suddenly had an answer.

It turned out David had developed a new, rare, but serious condition that is believed to be linked to COVID-19 called Multisystem Inflammatory Syndrome (MIS-C), which so far has seemed to only affect children and young people, often several weeks after exposure to the coronavirus.

Doctors believe it is an immune response from the body that affects different organs, including the heart, and it has been fatal in a small number of cases.

“We believe it is an abnormal inflammatory response in patients who have been exposed to COVID,” said Dr Ofori-Amanfo, the head of Paediatric Critical Care Medicine at Mount Sinai, who was one of the doctors who treated David.

The new condition has puzzled doctors in the regions where it emerged in April — New York, London, Northern Italy — as children and young people had previous been less affected by the virus than older people.

“This took us by surprise, because everything we knew about COVID was that it was a mild disease in children,” Dr Ofori-Amanfo told 7.30.

“In the data that came out of China, only 1 per cent to 2 per cent of the patient population were children under 18.

“We saw our first case on April 24 … so far, we have about 200 cases reported in New York state alone.

“Every case that came into the door was a challenge for us.”

Dr Ofori-Amanfo has treated more than a dozen cases, but was concerned when David arrived at the hospital in May with extremely low blood pressure and chest pain.

“He was very sick when he came in,” he said.

“Back then, we also hadn’t seen as many cases as we have seen today.

“So the concern we had was quite high because we just had no idea the trajectory of this disease and how it behaved.”

Your questions on coronavirus answered:’We’re learning more about the disease’ MIS-C symptoms include fever, headaches, rash and stomach pain.(ABC News)

At first David didn’t respond to standard treatments to reduce his symptoms, such as intravenous fluids.

“He went on to progress to have shock, that required resuscitation and required medication to control his blood pressure,” Dr Ofori-Amanfo said.

While there is no cure for MIS-C, doctors around the world are collaborating to trial effective treatments to the condition, including various blood medications.

And he said newer research was indicating it could now affect adults too.

“Our recent reports are that it is actually also affecting younger adults. And we’re talking about adults in their 30s and 40s,” Dr Ofori-Amanfo said.

For the whole week, David’s father stayed by his side in the isolated COVID-19 room.

“I was with David at the hospital for six days straight. And I was worried because we never had any health issue in my family, no problem, no heart problems.

“Not knowing what was going on. It was very, really scary.”

To pass the time, David junior, who hopes to be an architect or an engineer when he’s older, made drawings of the doctors and nurses who treated him.

“Drawing for me has always been therapeutic,” he said.

After a week, when his tests came back clear, David was discharged from hospital, but was quarantined away from his family’s Bronx home for two weeks.

He is now looking forward to seeing life in his city returning to normal.

“New York for the past few months has been going through a lot. And especially New Yorkers, dealing with grief, loss of life, loss of loved ones,” he said.

“Even with the hardship and all of this, all this sadness, I think that we as New Yorkers still are still standing strong, loving each other and providing our support for the people on the front lines.”

There have been no known cases of Multisystem Inflammatory Syndrome in children (MIS-C) in Australia, but the Government has commissioned a study into the condition.

Dr Philip Britton from the Children’s Hospital at Westmead in Sydney is one of the infectious disease paediatricians taking part in the program to monitor children for the new syndrome.

“Coronavirus has been intriguing in that the effects on children have been very different to the effects on adults, which is unusual for viruses,” Dr Britton told 7.30.

He urged parents not to panic about MIS-C as there was little chance of the disease emerging in large numbers in Australia.

“We think there’s been at least 200 children around the world who’ve been described to have this syndrome,” he said.

“But that’s in countries where the aggregate infections in children would be many tens of thousands.

“So, given that we’ve only had 300 cases in children, in young people under 20 in Australia, we think that the likelihood of this happening here is extremely low.”