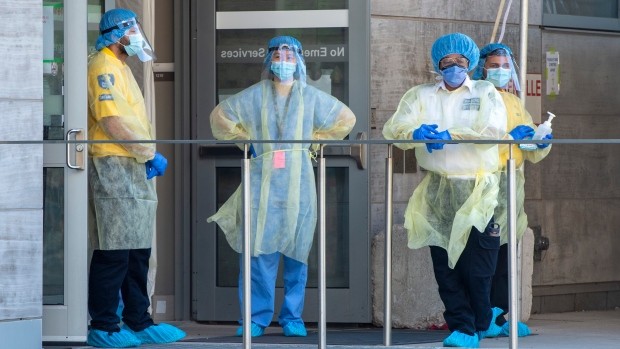 TORONTO —
With “quarantine fatigue” settling in and lockdown restrictions loosening in parts of the country, a casual observer might think the COVID-19 pandemic is ending.

But, as many medical experts will tell you, it’s far from over.

“More than six months into the pandemic, this is not the time for any country to take its foot off the pedal,” said World Health Organization Director General Tedros Adhanom Ghebreyesus in an online briefing earlier this week.

In Canada, health experts are echoing that sentiment.

“This pandemic is only over for people who don’t survive it,” wrote Toronto physician Dr. Abdu Sharkawy in a tweet about a couple who died just three minutes apart, a stark reminder that the virus is still taking its toll despite economic reopenings.

Here are some other reminders that COVID-19 is still a threat:

Biggest daily spike globally: On Sunday, there were more than 136,000 cases officially recorded globally. That’s the highest number recorded in a single day so far, WHO announced at a daily briefing. “Results from studies to see how much of the population has been exposed to the virus show that most people globally are still susceptible to infection,” said Ghebreyesus. On Monday, there were more than 131,000 additional cases reported to the WHO.

New Brunswick resurgence: In Canada, much has been made about provincial reopenings. New Brunswick, a province of about 776,000, was among the first in the country to loosen restrictions. It went more than two weeks without any new cases in late April and has twice announced that all known cases were resolved. But recent weeks have seen a new spike in cases, many linked to a local physician who had travelled to Quebec. On June 4, the province recorded its first virus-related death and on Monday announced nine new cases, the biggest one-day spike in more than two months.

“Those impacted by COVID-19 in recent weeks here in the city are a younger demographic than was seen earlier in the course of our outbreak,” Toronto’s Medical Officer of Health Dr. Eileen De Villa said. “Does that give rise to concern? I think any amount of COVID-19 gives rise to concern and it should.”

There’s no vaccine: While an unprecedented global effort is underway to develop and produce a vaccine that can protect against COVID-19 infection, that reality is still many months away, according to health experts. The mumps vaccine more than 50 years ago took four years to become widely available – and it is largely considered to be the fastest ever approved. Anticipating “mass vaccinations,” the federal government has already ordered millions of syringes, but experts can’t provide an accurate timeline for when those vaccinations might happen.

Case number is not accurate: Since April, researchers have said that a lack of testing means the number of COVID-19 cases is actually many times higher than is being reported by health officials. In Canada, nearly two million tests have been administered, which represents about 51,000 for every one million people, a far lower rate than dozens of other countries, including the U.S. and the U.K.

“These models all tell us that if we relax too much, or too soon, the epidemic will most likely rebound,” said Tam.

Federal projections estimated that the peak of cases in Canada might come in late spring, with the end of a first wave of infection coming in the summer. Experts insist a second wave is likely, even as much of Canada expects to find some much-needed quarantine relief with summertime reopenings.

Don't Miss it Coronavirus: Zoos and safari parks set to reopen from 15 June – PM
Up Next Huntsman now has to retake COVID-19 test after initially getting ‘wrong results’