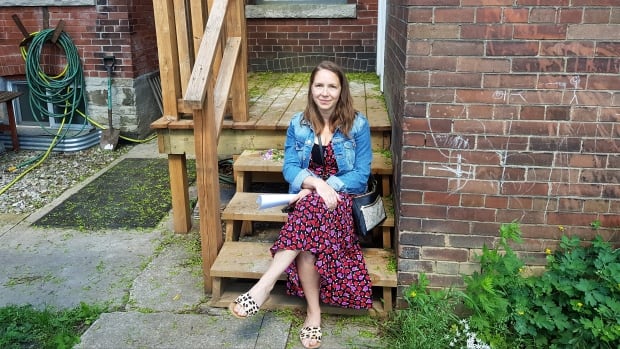 Facing a huge backlog of renovation and building applications since the pandemic virtually shut down city hall, City of Toronto staff are experimenting with a new process they hope will unclog the system.

Instead of in-person meetings of the city’s four committee of adjustment panels, planning staff are trying online meetings, to meet physical distancing guidelines —  a move they hope will help clear a backlog that is now more than a 1,000 applications long.

“We’ve had to re-imagine how we’re going to deliver this service, and we’ve done that now, and we’re going to … get the tiger by the tail and make sure that we can move forward with people’s lives.”

Gregg Lintern, Toronto’s chief planner, says the city will hold approval meetings as often as once a week in the coming months, in an effort to pare down the backlog of renovation applications. (Talia Ricci/CBC News)

One of the families caught up in the backlog is Noemi Hallett’s. She says the sudden delays could lead to her family’s financial ruin.

Hallett and her husband Matthew bought a 100-year-old house on Winona Drive, in the Vaughan Road and Oakwood Avenue area, late last year, knowing that it required renovation.

Much of that work is underway, but part of it — a nine-square-metre addition to a rear corner of the structure — proved to be more complicated.

“We were told we had to go to the committee. And then COVID hit,” Hallett said. Since then, the entire project has slowed.

Although the Halletts got their application in before the city shut down, they’re still waiting to be scheduled for a hearing on the addition.

Architectural consultant Brian Abbey is helping shepherd the Halletts’ renovation through the city’s approval processes. He fears the relatively simple project could take another year to complete because of a backlog of applications caused by the pandemic. (Mike Smee/CBC)

And architectural consultant Brian Abbey, who’s helping guide their project through the approval process, worries it could be well into the fall before that hearing happens.

“After you get a final decision, you have to wait the 20-day appeal period,” Abbey said.

“Once you get your final and binding letter from the committee, you would then apply for your building permit, then the contractor would have to come back to do the work.”

All in all, he figures a project that could’ve been finished by this August could now take until early 2021 to complete.

Noemi Hallett, centre, with her six-year-old son Vedder, left, husband Matthew and daughter Isla, four, in the back yard of their new home on Winona Drive. (Oliver Walters/CBC)

She lives along with her husband and two small children in a house at Bloor Street West and Christie Street.

“We’re going to run out of money because we’ve got two mortgages that we didn’t expect to carry for this long,” she said.

Complicating matters, she says, is that she’s been told her job as an interior designer will come to an end in September.

“We’re running out of money,” she said. “I can’t put my house on the market until I know I can move in [to the new house].

The Halletts bought this house on Winona Drive late last year and started renovations, which are now caught up in the approvals process at city hall, due to delays brought on by the pandemic. (Mike Smee/CBC)

Hallett says she’d like to see the city triage the backlogged applications, and deal with the simplest projects first.

City planners are ramping up the committee’s meeting schedule, Lintern says, in an effort to clear the backlog and start processing new applications as soon as possible.

Instead of a hearing every month or so,  the online panels will meet much more frequently, perhaps as often as once a week, he says.

The city’s committee of adjustment panels each cover a different quadrant of the city.

The Toronto-East York panel piloted the new online meeting model last week. This week, the North York panel holds one, followed by the Etobicoke-York and Scarborough panels later this month.

“We have to move through that pile of applications on a first-come, first-served basis, trying to look at ones that are maybe a little more simple and straightforward,” Lintern said.

“The committee is so vitally important to moving the economy forward and moving people’s lives forward.”

Even with the ramped-up meeting schedule, Lintern says the committee of adjustment panels will only be able to handle about half as many applications as they did in the pre-pandemic days — about 20 applications per hearing as opposed to 40 or 45.

Easing the city’s burden, he says, is the fact that since the shutdown, applications have dropped by about 40 per cent.

Under the new model, homeowners will dial into an online meeting site, along with their consultants, the panel members and anyone who might be opposing the project.

Lintern says he’s confident the city has the technical ability to make the meetings run smoothly.

“We’ve got a really solid operational plan in place to maybe start off with 20 applications, make sure that all the bugs are ironed out, and then going forward build up that capacity to make sure that we run a good process,” he said.

He says the city’s interested in getting the project approval process up and running, but in the safest manner possible.

“Putting all that together means running a virtual hearing.”