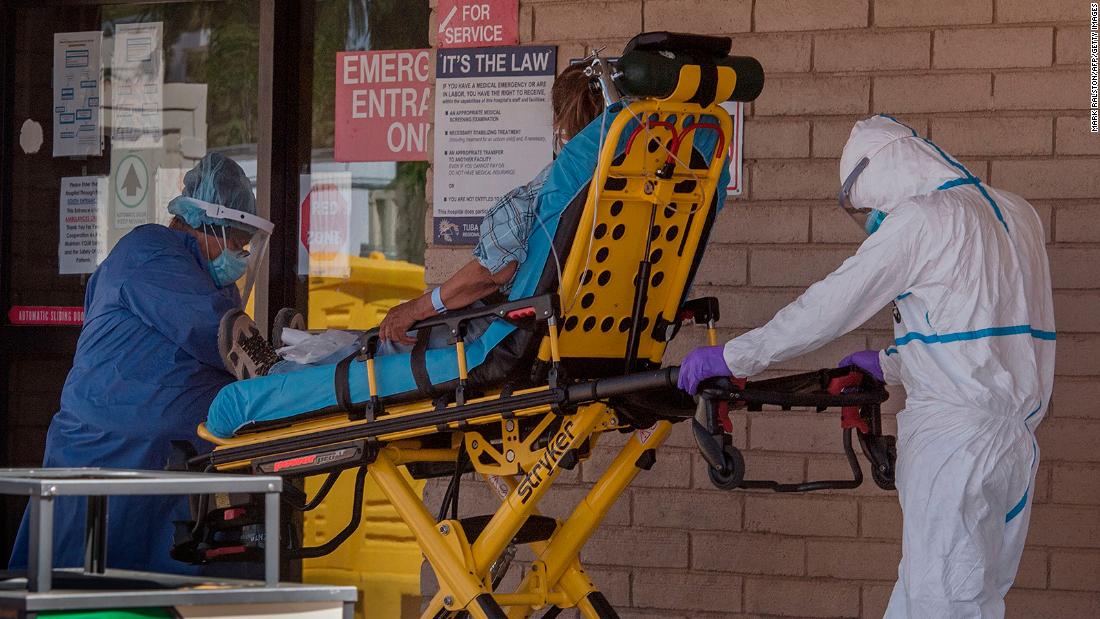 The spike in numbers highlights how complicated it is to stop the spread of the virus despite improvement in early hotspots such as New Jersey.

Since Memorial Day, the number of coronavirus hospitalizations has gone up in at least a dozen states, according to data CNN aggregated from the Covid Tracking Project between May 25 to June 9.

Many states have loosened restrictions set up from March to stop the spread of the virus. But with no vaccine, more people congregating in public places and national protests, health experts issued a bleak prediction.

“I think right now, most Americans are not ready to lock back down, and I completely understand that. I understand people are willing to live alongside this virus. It means that between 800 and 1,000 Americans are going to die every single day,” Jha told CNN’s Kate Bolduan on Wednesday. ” … We’re going to get another 100,000 deaths by September. So that’s a catastrophic cost … we really do have to try to figure out how to bring the caseloads down from these scary levels, in some states.’

The Institute for Health Metrics and Evaluation, an influential model cited by the White House, says its forecast shows a total of 169,890 deaths nationwide by October 1.

“If the US is unable to check the growth in September, we could be facing worsening trends in October, November, and the following months if the pandemic, as we expect, follows pneumonia seasonality,” IHME Director Dr. Christopher Murray said in a statement.

Hospitalizations are up in some states

As the numbers increase in some states, Arizona officials are telling hospitals to activate emergency plans.

At its peak, the state’s intensive care unit beds were 78% in use. As of this week, 79% were occupied. Arizona’s Director of Health Services Dr. Cara Christ asked that hospitals “be judicious” in elective surgeries to ensure bed capacity.

“We know Covid-19 is still in our community, and we expect to see increased cases,” the Arizona Department of Health Services tweeted.

Bed capacity and medical resources were among the top concerns in treating the coronavirus pandemic when the nation first reached a peak. Health experts say it is a matter of when — not if — the country sees another surge in cases that could overwhelm healthcare systems once more.

Fears of another spike are not limited to any particular regions.

North Carolina recently broke the record of the number of people hospitalized with coronavirus, according to the North Carolina Healthcare Association. By early Thursday, it had 780 hospitalizations.

Though there is plenty of capacity left in hospitals, the state is concerned about the trends in hospitalizations that increased when it first eased restrictions and then again after Memorial Day weekend.

The number of Covid-19 hospitalizations since Memorial Day has gone up in at least a dozen states: Alaska, Arkansas, Arizona, California, Kentucky, Mississippi, Montana, North Carolina, Oregon, South Carolina, Texas and Utah, according to data aggregated from the Covid Tracking Project.

Overall, the new data mark an increase in several states that began in the past couple of weeks. The lag period between when people are exposed to the virus to the time that they may actually get tested and come back with a confirmed infection can be about two to three weeks.

Some states are extra cautious

While New Jersey’s numbers are improving, it’s not yet out of the woods, Gov. Phil Murphy said. And Los Angeles is encouraging residents who have attended protests over the death of George Floyd to monitor for symptoms.

“You could have an exposure and it will not come through a contact tracing system. Nobody knows that you were there, nobody has your name,” Los Angeles County Public Health Director Barbara Ferrer said.

Los Angeles County is seeing an average of 1,300 new coronavirus cases a day as it allows more businesses to reopen, including gyms and museums.

The infection rate peaked at 3, and was brought down to slightly below 1 through the collective effort to flatten the curve, Los Angeles Mayor Eric Garcetti said at a news conference.

County health officials now estimate the rate to be closer to 1.3 or certainly above 1, he said, adding that the reopening makes him “nervous.” He urged people who participated in protests to quarantine for 14 days or get a free test from the 24 testing sites across the city and county.

Hawaii extends its quarantine for visitors

Hawaii has extended its mandatory 14-day quarantine for out-of-state travelers to July 31.

“We are working very hard toward re-opening out-of-state travel, but we’re not there yet. We are being very cautious,” Gov. David Ige said Thursday. “There are new virus flare-ups in key mainland markets — including California where more than 2,000 new cases were reported yesterday. Oregon, Arizona and Texas are also reporting their highest number of new daily cases.”

Hawaii has arrested visitors who posted social media images in public places when they’re supposed to be on quarantine. The current mandatory quarantine for locals traveling from one Hawaii island to another will be dropped Tuesday, Ige said.

CNN’s Madeline Holcombe and Arman Azad contributed to this report.

Don't Miss it How city’s reno backlog due to COVID-19 could lead to financial ruin for at least one family
Up Next Can artificial UV light help putting an end to the coronavirus pandemic? | COVID-19 Special