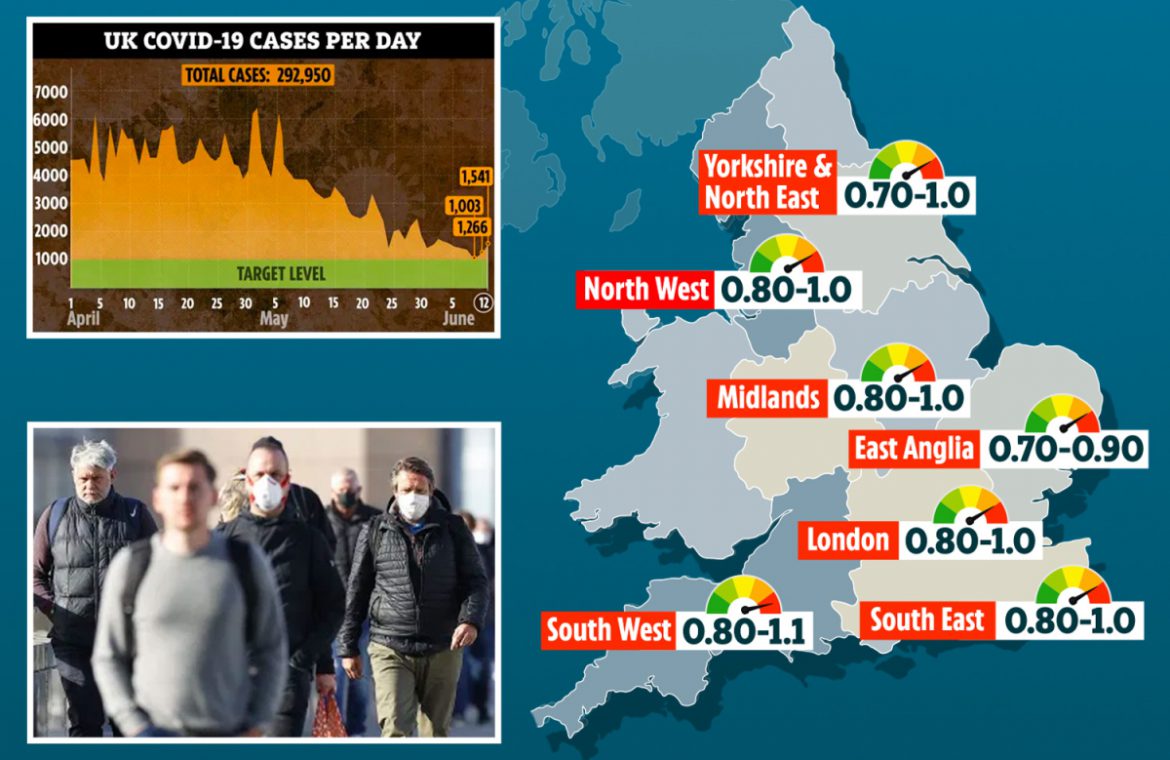 THE crucial coronavirus R rate has stayed the same across the UK despite creeping above 1 in the South West of England.

Across the UK, the reproduction number is currently 0.7 to 0.9, whereas in England it sits between 0.8 to 1, according to the latest figures.

The R rate is crucial to determine how the country eases lockdown, pictured, people cross London Bridge in the capitalCredit: London News Pictures

It means England’s R rate has crept up slightly from 0.7 to 1 last week.

Figures released today show that the R rate in the South West of the country has crept above 1.

It is the first time the government has published regional R rate figures during the pandemic.

In the South West the R rate sits between 0.8 and 1.1 and it’s the only place in England where the rate has crept above 1.

London, which had previously been a virus hot spot now sits between 0.8 and 1 along with, the Midlands, the North West and the South East.

The North East and Yorkshire sits between 0.7 and 1.

Instead, from next week the Government will publish the growth rates for regions that are based on data and make fewer assumptions.

Dr Yuliya Kyrychko, Reader in Mathematics at the University of Sussex said the government needs to “be careful” when using these numbers when it comes to easing the lockdown in the UK.

This is while Dr Konstantin Blyuss added that the regional breakdowns could mask what is possibly a significant local variation in the level of infection.

The value – which represents the average number of people one infected person will pass the virus onto – is likely to be higher in care home settings.

Experts say that this can create pockets of higher transmission, which could push the average up across the country.

The government publish the R rate on a weekly basis, as well as during the daily No 10 press briefings.

Last week, it was reported that the R rate had crept above one in the North West of England and was teetering at 1 in the South West.

But Sir Patrick Vallance said the value had now fallen in every part of the country by the start of this week.

Referring to data from the Office for National Statistics, he said 53,000 were thought to be infected between May 17 and 30.

Health Secretary Matt Hancock also told ministers that R value had fallen – and the virus is “in retreat”.

The R-number is the average number of people that will contract coronavirus from an infected person.

If R is one or higher, the virus will spread exponentially through the population.

An R number of less than one indicates the virus is in decline.

The R rate is so important given the implications it could have for lockdown measures. If it rises above one – a sign the epidemic is growing – tougher restrictions may be reintroduced.

There is a time lag in the calculations, with the latest R value relating to what was happening two to three weeks ago.

Prof Matt Keeling, Professor of Populations and Disease at the University of Warwick said there is no way to suggest that one region is worse than the other due to the over lap in data.

“All the ranges are closer to the critical threshold of R=1 than we would ideally like to see – which means that the epidemic is declining relatively slowly.

“This also means we haven’t got much wiggle room for additional relaxation of social distancing measures.”

He added that as the number of cases becomes smaller in many regions these predictions will become more uncertain.

Don't Miss it Coronavirus: South Korea has seen its confirmed cases spike – BBC News
Up Next May 6: Coronavirus data analysis from Australia and around the world | ABC News