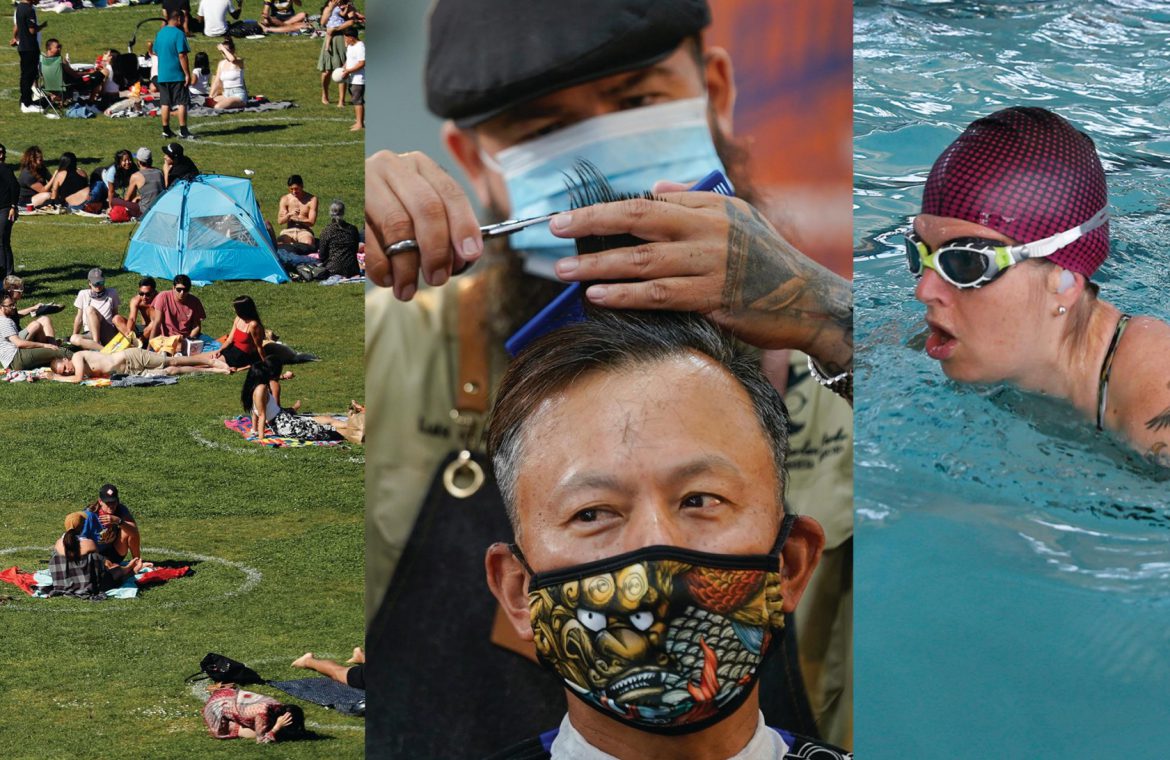 After months of sitting at home, mindlessly scrolling through the Netflix home screen while in isolation, Bay Area residents are now hankering to get back out into the world.

In a rush to reopen the economy, several counties in the region are loosening restrictions that were put in place in March to slow the spread of the coronavirus, which means people can once again dine at restaurants in the Mission, plan a weekend trip to Lake Tahoe, or spend the day at the neighborhood pool.

But with the virus still spreading — and health experts warning that we may be moving too quickly — how do you determine what’s safe?

“Don’t be stupid,” said Dr. George Rutherford, head of the division of infectious disease and epidemiology at UCSF.

What that means is taking the familiar safety precautions when leaving the house: Wear a mask, wash your hands, don’t touch your face, avoid crowded spaces and maintain physical distance.

Resuming normal routines will require even more consideration, though, no matter how badly you need a haircut.

“The virus doesn’t listen to the radio, read the newspaper or watch CNN,” Rutherford said. “This is us trying to talk our way out of biological phenomena with an organism whose only purpose is to reproduce.”

The Bay Area as a whole is reporting as many new cases each week now as in the early days of the outbreak, reversing several weeks of declining numbers. The only difference is government leaders are now letting people who are too restless to shelter in place to assess their own personal risk.

“The virus is as infectious as it was three months ago,” said Dr. Grant Colfax, the Director of the San Francisco Department of Public Health. “What has changed is our behavior.”

While the safest option remains staying home until a vaccine or effective treatment option is developed for COVID-19, for those who feel the need to venture out during the pandemic, The Chronicle asked infectious disease experts to rate the risks of some popular Bay Area activities based on a scale of 1 (lowest risk) to 5 (highest risk).

“You’re going to need to look out for yourself,” Rutherford said.

While the risk of transmission is far less outdoors than inside, these kinds of gatherings should be avoided. But if you can’t resist an afternoon with friends, in addition to following basic coronavirus safety precautions, you should avoid sharing food, utensils and drinks; and avoid touching shared surfaces.

“There’s nothing magical about your friends if they’ve gotten infected,” Rutherford said.

Want to savor a cappuccino at a European style cafe?

In a busy neighborhood, there’s a chance that people will walk by on the sidewalk without masks. You may also come into contact with contaminated surfaces before they are properly sanitized, such as tables, menus and utensils.

The risk also increases significantly the longer you are stationary next to another person, especially if they are talking. One study found that normal speech can release thousands of droplets that can remain suspended in the air for eight to 14 minutes.

It’s up to you to weigh the risk versus the reward for that afternoon jolt of caffeine.

BLVD hotels have taken steps to protect guests with a “cold fogging” of an ethanol and hydrogen peroxide solution.

Experts advise against traveling for leisure during the pandemic. But if it is necessary, find a hotel that clearly discloses its cleaning practices and provides a buffer period between guests staying in the same room.

Even if the hotel you are staying at is thoroughly cleaned, there is a chance of coming into contact with other people in the lobby or hallways. Housekeeping could also be an issue, with people outside of your bubble entering your room and touching shared surfaces.

Alternately, taking a car trip to a nearby destination like Yosemite or Lake Tahoe would be considered a low-risk activity if you could camp and not have to stay at a hotel.

The bottom line is “the more people travel, the more they’re putting themselves and others at risk,” said Dr. John Swartzberg, professor emeritus of infectious diseases and vaccinology at UC Berkeley. “It’s this risk-benefit equation. When you travel from an area where there’s a few more cases of SARS-CoV-2, you potentially can transmit the infection to communities that have been doing quite well.”

Swimming in pools is generally considered safe, especially if they are outdoors. The risk comes once you’re out of the water.

“How crowded is the deck and locker room? How many people are congregating around the stairs?” Rutherford said. “If you’re standing around in waist-deep water with a cocktail in your hand around hundreds of other people that’s a different issue.”

Your best bet for swimming is in a private backyard pool.

Even better, find an uncrowded spot near a lake or ocean with plenty of sunshine and wind, where you can easily maintain proper physical distancing.

Drinking out? Experts advise keeping your mask on unless you’re imbibing.

Many restaurants, bars and wineries around the Bay Area are opening for both outdoor and indoor sit-down dining.

Standing in line at a popular restaurant with a group of other people for a few moments rates as a moderate risk. Sitting down for a long meal or going wine tasting with friends could be far more dangerous, depending on the layout of the venue.

“If you want to go to a restaurant, I’d either go very early or late, and miss the crowd,” Rutherford said. “I would want to sit outside. I would want the server to wear a mask.”

Experts also advise keeping your mask on unless you’re imbibing.

According to the CDC, the coronavirus can’t be spread through food. But the virus can live on a surface — say, a bar top, an iPad or a door handle — and be transmitted if a person touches a contaminated surface and then their nose, mouth or eyes.

With 8-year-old Ari Kaufman leading the way, Ryan Loften takes some students for a ride near Phoenix Lake in Ross in 2013.

Fresh air and physical activity are important. With more space between people, the risk goes down. But it’s important to give other individuals from outside your household a wide berth. Also, carry a mask you can put on as soon as you’re within 30 feet of another person, especially if you hit a narrow part of the trail.

Passing someone for a few seconds is not a cause to worry, assuming they are not sick, asymptomatic or pre-symptomatic.

“We’re going to have to trust others to be responsible enough to cut down on the risk of transmitting it to other people,” said Rutherford.

A free cardio zumba dance class offered by Fitness SF on the rooftop Salesforce Park in 2018.

We know that indoor group exercise in a confined space should be avoided. In March, 112 people in South Korea were infected with the virus after attending a Zumba class.

But what about outdoors?

Whether you’re dancing, roller-skating or strength training with others in Golden Gate Park — or even grooving with neighbors at a porch concert down the block — physical exercise can induce heavy breathing, which is likely to increase the release of respiratory droplets.

As most people do not wear masks while doing cardio work, physical distancing is crucial to lowering the risk of transmission. Experts suggest doubling the recommended 6-foot radius.

The risk of going to a hair salon or barbershop varies by circumstance: How many people are in the room? How large is the space? How long will you be there?

Despite the basic hygiene requirements, the risk primarily comes from the extended face-to-face contact with a potentially asymptomatic barber or stylist. There’s no way to practice safe physical distancing while cutting someone’s hair.

To help minimize the risk, experts suggest avoiding conversation; sanitizing your hands before and after sitting down; and wearing a face covering correctly over your nose and mouth.

“Be sure to wear your mask and be sure the barber wears his or hers, too,” said Rutherford.

Don't Miss it Infectious disease doctor ‘wouldn’t rule out’ another COVID-19 lockdown in Ontario this year
Up Next India’s coronavirus agony: ‘I did everything to save my wife and baby’ | World news