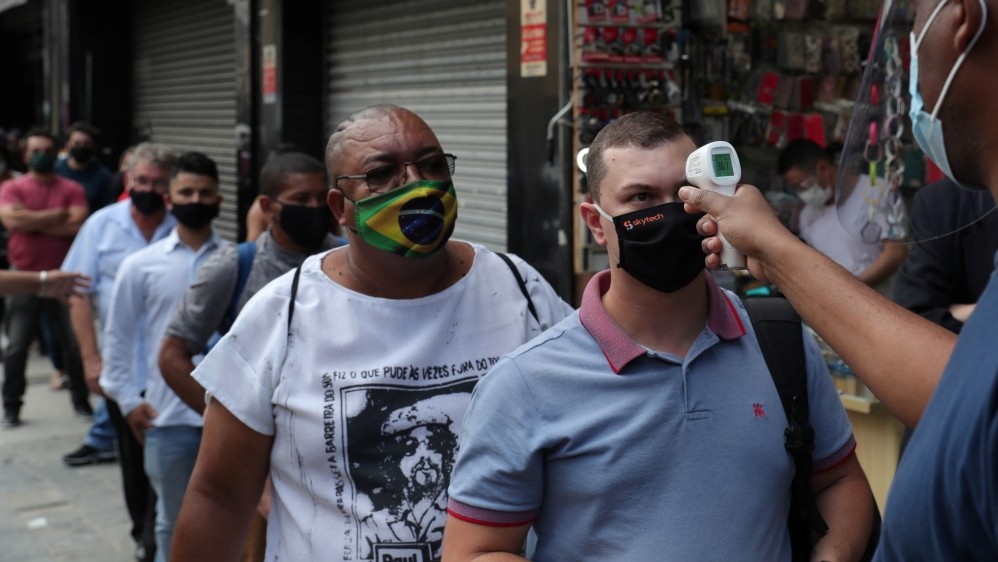 A vaccine against COVID-19 developed by US biotech firm Moderna will enter the third and final stage of its clinical trial in July with 30,000 participants, the manufacturer has announced.


Russia surpassed 500,000 cases after 8,779 new infections were reported by health officials. The death toll stands at 6,532, a number the World Health Organization (WHO) has cast doubt over.


Neil Ferguson, an epidemiologist at Imperial College London, whose modelling helped set the UK’s coronavirus strategy, says the country’s death toll could have been halved if lockdown had been introduced a week earlier. The UK has more than 291,000 cases and at least 41,000 deaths.


Students’ mental health is in focus in post-lockdown China, amid an increase in the number of suicides. In one Shanghai district, there have been 14 suicides by primary and secondary school students so far this year.


More than 7.48 million people have now been confirmed to have the coronavirus and at least 420,000 have died, according to data from Johns Hopkins University.

One of Thailand’s major tourist attractions is barring entry to foreigners, professing fear that they could spread the coronavirus.

Signs seen Thursday morning at the main gate of Wat Pho, the Buddhist temple adjacent to the Grand Palace in Bangkok, said in English: “Open for Thai only,” “ONLY THAI PEOPLE,” and “NOW NOT OPEN FOR FOREIGNERS.”

The temple is one of the country’s grandest, with murals and gold trim covering many surfaces, but is best known for housing the 46-meter-long (151-foot-long) Reclining Buddha, which is covered in gold leaf.

One of Wat Pho’s administrative staff explained by phone that the temple committee decided to exclude foreigners because of concerns about COVID-19. However, there is no known government order to ban foreigners from the temple.

Hundreds of children in Indonesia are believed to have died from COVID-19, giving the Southeast Asian country one of the world’s highest rates of child deaths from the new coronavirus.

Since Indonesia announced its first coronavirus case in March it has recorded 2,000 deaths, the highest in East Asia outside China.

A total of 715 people under 18 had contracted the coronavirus, while 28 had died, according to a health ministry document dated May 22 and reviewed by Reuters news agency.

It also recorded more than 380 deaths among 7,152 children classified as “patients under monitoring”, meaning people with severe coronavirus symptoms for which there is no other explanation but whose tests have not confirmed the infection.


Indonesia’s Jakarta is reopening after weeks of lockdown (2:39)

Even the official figure for children who have died of the coronavirus, at 28 as of May 22, would give Indonesia a high rate of child death, at 2.1 person of its total. In comparison, deaths for those aged under 24 in the United States are a little over 0.1 percent of its fatalities.

“COVID-19 proves that we have to fight against malnutrition,” Achmad Yurianto, a senior health ministry official, told Reuters.

He said Indonesian children were caught in a “devil’s circle”, a cycle of malnutrition and anaemia that increased their vulnerability to the coronavirus. He compared malnourished children to weak structures that “crumble after an earthquake”.

Wanda Vazquez, the governor of Puerto Rico, announced that she will lift nearly all restrictions aimed at curbing coronavirus cases, which means beaches, churches and businesses including movie theaters and gyms across the US territory will reopen after three months.

The changes will occur starting on June 16, Vazquez said, when businesses also will be allowed to operate seven days a week and restaurants at 50 percent capacity. However, she tweaked an ongoing curfew that will remain in place for two weeks from 10 pm to 5 am.

She also said Puerto Rico will be officially ready to welcome tourists starting July 15 and that airport screenings will continue.


Many stranded in Philippines capital after losing jobs amid pandemic (2:39)

The economic fallout from the coronavirus pandemic could plunge an extra 395 million people into extreme poverty and swell the total number of those living on less than $1.90 a day worldwide to more than 1 billion, according to a new report.

The document – published by UNU-WIDER, part of the United Nations University – played through a number of scenarios, taking into account the World Bank’s various poverty lines – from extreme poverty, defined as living on $1.90 a day or less, to higher poverty lines of living on less than $5.50 a day.

Under the worst scenario – a 20 percent contraction in per capita income or consumption – the number of those living in extreme poverty could rise to 1.12 billion. The same contraction applied to the $5.50 threshold among upper-middle income countries could see more than 3.7 billion people – or just over half the world’s population – live below this poverty line.

“The outlook for the world’s poorest looks grim unless governments do more and do it quickly and make up the daily loss of income the poor face,” said Andy Sumner, one of the report’s authors.

“The result is progress on poverty reduction could be set back 20-30 years and making the UN goal of ending poverty look like a pipe dream.”

You can find all the updates from yesterday, June 11, here.