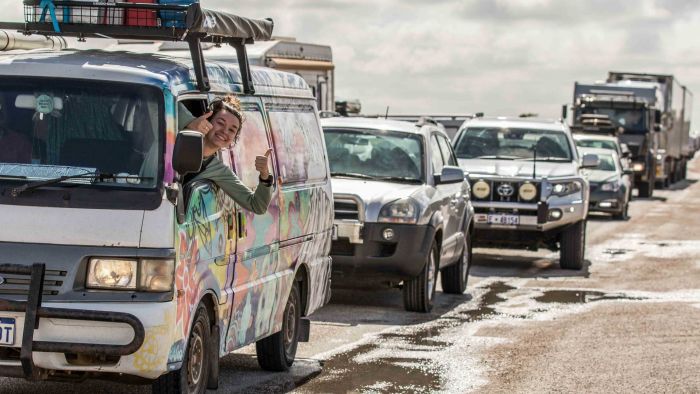 South Australia will reopen its borders to unrestricted travel on July 20, while restrictions on venues including pubs, restaurants and gyms will be further eased next week.

Key points:Up to 300 people will be allowed per venue in SA from next FridayPremier Steven Marshall also announced SA’s borders will open on July 20The Government is seeking legal advice on opening individual borders earlier

From next Friday, up to 300 people will be allowed in venues, with up to 75 per room.

Premier Steven Marshall said the decision to lift border restrictions means travellers into South Australia from other states would no longer need to quarantine themselves for 14 days.

“We don’t want to unnecessarily detain people for two weeks of isolation if they don’t pose a health risk to us in South Australia,” Mr Marshall said.

By the time they reopen, South Australia’s borders will have been shut for almost four months after the closure came into effect on March 24.

However, Mr Marshall said restrictions for international travellers will remain.

Mr Morrison also announced sporting events and festivals could soon be allowed to have up to 10,000 people in attendance if they were seated and ticketed.

Singapore Airlines flights to Adelaide resumed this week, but mostly for cargo and those who have an urgent need to travel.

The Premier also revealed the State Government was seeking legal advice on whether it could open particular state borders earlier than July 20.

“We will be looking at some of the state borders with individual jurisdictions who are doing particularly well,” he said.

“We don’t want to unnecessarily detain people for two weeks of isolation if they don’t pose a health risk to us in South Australia.

“We’re just getting some final legal advice on that.”

South Australia’s 75-person per room limit, beginning next Friday, will also apply to gymnasiums, but smaller limits will continue to apply for fitness classes.

Mr Marshall described the new rules from next Friday as “stage 2.5” of the state’s easing of restrictions and announced the move to stage three will be brought forward from July 3 to June 29.

Pubs will be allowed to expand the number of permitted patrons.(Supplied: Little Bang Brewing Company)

Stage three was supposed to include a cap of 100 patrons in any one room, but Mr Marshall said today that limit would be scrapped in favour of one person per four square metres.

But nightclubs and music festivals — which were deemed “high risk” by SA Chief Public Health Officer Dr Nicola Spurrier — will remain off limits.

“I do feel quite apologetic saying that because I have young adult children and they absolutely love going to those sorts of venues,” Dr Spurrier said.

She said keeping clubs shut was vital for avoiding a second wave of the virus.

The Australian Hotels Association this morning called for bigger crowds at pubs, saying the industry was “still in crisis”.

“There’s tens of thousands of our staff who have not been re-engaged yet … we actually can’t get them back until we get the capacity of people coming in and spending the money,” state chief Ian Horne said.

Mr Marshall said the decision to reopen the state’s borders was only possible because of high levels of compliance with coronavirus restrictions in South Australia and a “massive improvement right across the nation”.

“We still have a very, very high level of compliance … this has given us great confidence that we can continue to lift restrictions in South Australia,” he said.

“There have only been 43 [COVID-19] cases over the past week right across the entire country with more than two thirds of those coming from people just returning from overseas.”

Earlier today, the Opposition called on the State Government to detail its plans to accommodate homeless people once coronavirus emergency arrangements end.

About 260 people remain in South Australian hotels, while nearly 80 have been found longer-term rental housing.

Labor MP Nat Cook said there had been no indication from the State Government about what would happen to them when those arrangements ended.

“The shelter situation is clearly going to come to an end in terms of the use of hotels, but we haven’t heard anything recently in regards to a forward plan,” Ms Cook said.

“The State Government has been silent on the advanced plan for people who are currently using hotels.”

Human Services Minister Michelle Lensink said she was looking at a range of housing options for homeless people moved into hotels during the coronavirus pandemic.

“We’ve still got a lot of people in hotels and we’ve been very focused on ensuring that people can find a pathway back into the community and some of the services tell me such as Vinnies and Carrington Cottages that they’ve actually got vacancies at the moment,” she said.

Don't Miss it May 7: Coronavirus data analysis from Australia and around the world | ABC News
Up Next Share price of Malaysia’s Top Glove surged due to coronavirus pandemic