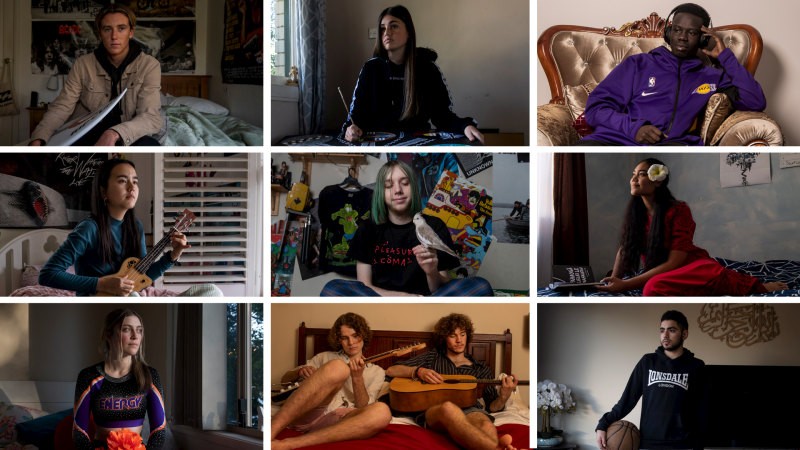 George Pittar had big plans. The junior surfing champion and year 12 student intended to devote 2020 to studying and competing, then fly to Bali for schoolies and spend 2021 travelling to competitions across the globe. Coronavirus has cancelled everything except the study. At least Pittar has found a silver lining; next year won’t send him broke. “I’m both bummed and all right about it,” he says.

Maddy Wahab, 17, was supposed to fly to Orlando, Florida, in April for the world cheerleading championships, but that was cancelled, too. Instead, she did school at home via Zoom, which was a frustrating experience; “every single day someone in my grade was crying”. It’s been a tough year, with one upside; she’ll have an interesting story to tell. “We are a part of history,” she says. “We do feel special.”

Cheerleader Maddy Wahab, 17, found home schooling a frustrating experience. “Every single day someone in my grade was crying,” she says. “It’s been a tough year.”Credit:Louise Kennerley

The class of 2020 is coming of age in a pandemic, the most severe in 100 years. After a stressful HSC year, they will graduate into a very different world from the one they expected. Their generation is one of the most globally-minded in history, yet travel abroad will be banned. They seek meaning and purpose in their work, yet will be lucky to find any job. And they yearn to spread their wings, yet may be forced to rely on their families as the economic downturn curtails their financial freedom.

Their parents, who may have graduated high school during the early 1990s recession, were the last school leavers to face such economic uncertainty, and this downturn may be worse. The challenges will shape the class of 2020, but they too will make their mark on history, says Professor Catherine Lumby from Macquarie University. “During times of adversity is often when you see a huge wave of creativity – when life isn’t sweet, when people are given pause for reflection.”

Year 12 arrived at school in January with high hopes for their final year and what lay beyond it. The HSC loomed, but they were also thinking ahead to the moment that burden lifted, and they would begin what many adults still remember as the sweetest summer of their lives, when their future was a blank slate, full of potential and promise.

The class of 2020 has never seen widespread economic hardship, and had no reason to think anything would change when they arrived at school to begin their final year in January. Their career aspirations were shaped by 30 years of prosperity, says Ashley Fell from McCrindle, a company that analyses social trends; Generation Z’s basic needs had always been met so they assumed that would continue, giving them the luxury of shifting their career ambition from survival to higher-order concerns, such as whether their work had a purpose, “does it align with my values, does it make a difference?” Fell says. They were outward-looking, too; “the number one short-term aspiration for Gen Z is to travel and see the world, at a time when travel was so accessible.”

During times of adversity is often when you see a huge wave of creativity – when life isn’t sweet, when people are given pause for reflection.

But then COVID-19 hit, and students were sent home. Year 12 student Zayd Arabiat felt his learning was seriously interrupted, which cast a pall over his HSC year. “The Zoom classes were not actually helpful, sometimes the teacher can’t hear us, and we can’t hear her,” he says. “It affected my maths. It’s hard to study on my own. We had a test on the first week back, and it was worth 10, 15 per cent, but no one did that well because we were not ready for it, we did not understand the content.”

Zayd Arabiat felt his learning was seriously interrupted, which cast a pall over his HSC year. “It affected my maths,” he says. “It’s hard to study on my own.”Credit:Louise Kennerley

The students did not know whether the end-of-year exams would go ahead. They feared they might never return to their school. All the other rites of passage – the school formals, the graduation dinners, the speech days – looked unlikely too. And then there were the 18th birthday parties, the highlights of an otherwise-serious year. Twins Jim and Ned Tulip wanted a traditional 18th bash, with beers and mates in the back yard, but instead had a dinner in isolation with their parents and girlfriends. “That was disappointing, but we still had a nice evening,” says Ned.

Twins Ned and Jim Tulip at home on their 18th birthday. Jim Tulip was hoping to go to Japan with mates. “We’ve been going to school for more than a decade, with no big break from it in between, and this year, especially, is stressful,” he says.Credit:Louise Kennerley

While formals and graduations at the end of the year are now looking more likely, and exams will go ahead, international travel is likely to remain off limits until well into next year, so overseas schoolies trips and gap years are cancelled. Jim Tulip was hoping to go to Japan with mates. “We’ve been going to school for more than a decade, with no big break from it in between, and this year, especially, is stressful,” he says. “A break from it all, working and relaxing a bit, would have been nice.”

Ring Kondok, 17, has felt unmotivated in his studies. “Socialising is one of the ways to reduce the stress and anxiety, but with all of the restrictions it’s been hard to do that,” he says.Credit:Louise Kennerley

While their thoughts are on schoolies and cancelled travel, there is a bigger problem looming for these kids – one that they may not yet fully appreciate. The economic outlook for the next few years is bleak, and young people will bear the brunt. The tertiary education system was facing a “perfect storm” which may mean studying or training options will not be as plentiful as many assume, says Peter Hurley from the Mitchell Institute. “It’s a very big problem,” he says.

Shylah Fenner with her grandmother Karen Nicholls at their home. “It made me feel extremely anxious not knowing how the rest of my school year would be,” Shylah says. “But I was able to take the time to reflect and really think about what I wanted to do after school as I wasn’t too sure before all of this happened”.Credit:Louise Kennerley

Demand for university will rise but places are capped, so, unless something changes, universities will not be able to fund a spike in interest from domestic students. The number of apprenticeships is expected to plummet. Vocational training was in strife before COVID-19. Paid work will be scarce. And Hurley expects the number of school leavers who do none of these things – the path most damaging to lifelong prospects – will skyrocket. During the global financial crisis, the proportion of school leavers in that category grew from 10 to 17 per cent, and “that was a rather mild economic shock,” he says. “I don’t think people are quite aware of just how difficult this is going to be for this group.”

In their own wordsRing Kondok has felt unmotivated in his studies. “Trying to transition into a different [learning] method makes it harder. Socialising is one of the ways to reduce the stress and anxiety, but with all of the restrictions it’s been hard to do that.”Maria Samueluu said she had missed out on school events such as the athletics carnival, “all those last things you get to do before you finish high school, and make those memories. We’re still waiting to see if we can have our formal.”Jarvis Ayres, a music buff, has been looking forward to going to pub gigs and festivals that are off-limits to under-18s. Due to COVID restrictions, he might have to wait even longer. “It won’t be long, hopefully, until everything clears up,” he says.Zoe Hannam, also a music fan, said it was required to bring everyone close. “When the school community was apart, music was needed to bring people together again and spread a sense of hope throughout the school,” she says.Shylah Fenner said it provided a time of reflection. “It made me feel extremely anxious not knowing how the rest of my school year would be and if I would be able to enjoy my last year at school with my friends,” she says. “But I was able to take the time to reflect and really think about what I wanted to do after school as I wasn’t too sure before all of this happened”. Shylah intends to look into apprenticeships after finishing school.

Even the part-time jobs students need to support themselves during tertiary study will be difficult to find, says Associate Professor Rebecca Cassells from the Bankwest-Curtin Economics Centre. “What we know about uni study is that they are often combining that with part-time work in hospitality and retail, and it will take a longer time for those two sectors to recover,” she says. “If those part-time jobs aren’t there, the chances are they will stay local [to study], and stay with mum and dad for longer, or look at cheaper study options.”

Just as the class of 2020 was ready to claim its independence, its wings were clipped. And ambitions of purpose-driven, meaningful jobs may be sacrificed, too. “The market has changed from an employee to an employer job market, and there will be more of a survival and security element, rather than being able to forego their opportunities to focus on their passion,” says Fell. “We are talking about a very entrepreneurial generation, but I do think it will shift some of their perspective around work and the job market.”

Maria Samueluu, 17, said she had missed out on school events such as the athletics carnival, “all those last things you get to do before you finish high school”. “We’re still waiting to see if we can have our formal,” she says.Credit:Louise Kennerley

They will be shaped by the experience, says Lumby. “I think about the punk era – under [former British prime minister Margaret] Thatcher, there was a whole culture and musical movement that’s an expression and outpouring of anger and nihilism.” Generation Z’s rising political consciousness, already seen in its climate activism and the recent Black Lives Matter protests, will likely intensify. “One of the outcomes will be that when young people feel older people have stuffed it up for them, there’s a politicisation that comes with that,” says Lumby. “I wonder if we will see a backlash against consumerism and the excesses of capitalism?”

Like their parents, their grandparents, and so many generations before them, “one of the lessons they’ll be learning is resilience in the face of adversity,” says Lumby. “And that’s not a bad thing. I think it’s going to be rough, and we need to be empathetic.”

Jordan Baker is Education Editor of The Sydney Morning Herald

Louise Kennerley is a photographer at The Sydney Morning Herald