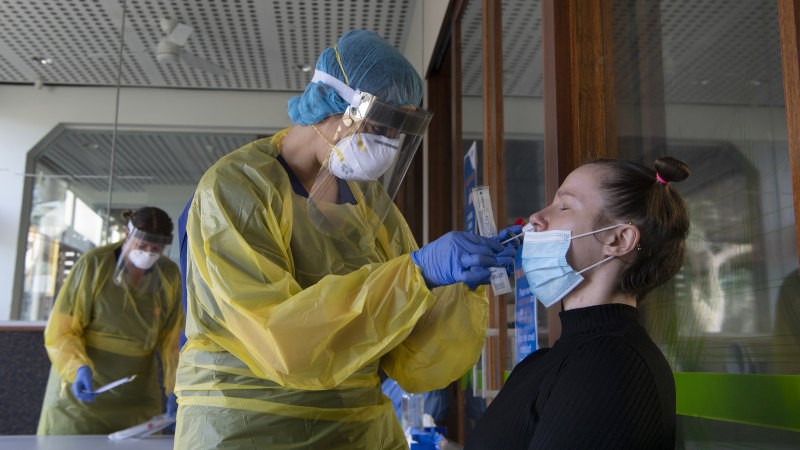 The Illawarra man has told contact tracers he did not attend any recent mass protests, and they have so far been stumped by the mystery source of his infection.

They have also found no link between the latest NSW case and a COVID-positive teacher at Laguna Street Public School in the southern Sydney suburb of Caringbah, that led to the closure of the school for two weeks.

While the number of new cases remains low, Australian Bureau of Statistics data recording Australians’ attitudes towards coronavirus released on Monday show that 95 per cent of people are still adhering to social distancing – including not shaking hands or hugging.

The number of people avoiding going out in public has fallen to 74 per cent, down from 85 per cent at the beginning of May. The number of people wearing a face mask and disinfecting surfaces before using them has remained about the same from the start of May.

Epidemiologist and lecturer in international health at the University of NSW Abrar Ahmad Chughtai said the number of people opting to get the flu vaccination this year was higher than in previous years. But he warned that an increase in flu cases was more likely than a COVID-19 outbreak as restrictions were eased. That was because “influenza is endemic at this time,” Dr Chughtai said.

“We know influenza is sometimes a deadly disease and I definitely think people should get a vaccination; they shouldn’t try to fight two viruses if a vaccine is available for one.”

The ABS survey also revealed that the majority of people are now comfortable with going back to work and sending children to school, but remain uncomfortable with taking public transport or attending large events.

About 80 per cent of people said they were now comfortable with sending their children back to school.

Meanwhile in a statement on Monday afternoon, a spokesman for Newmarch House operator Anglicare said it was “delighted” that NSW Health had declared the outbreak, which began on April 11 and resulted in the deaths of 19 elderly residents, was finally over.

Anglicare would “remain vigilant in screening and infection control at Newmarch House, and across all our other aged care homes”, the spokesman said.

Pallavi Singhal is a data journalist at The Sydney Morning Herald

Jenny Noyes is a journalist at the Sydney Morning Herald.