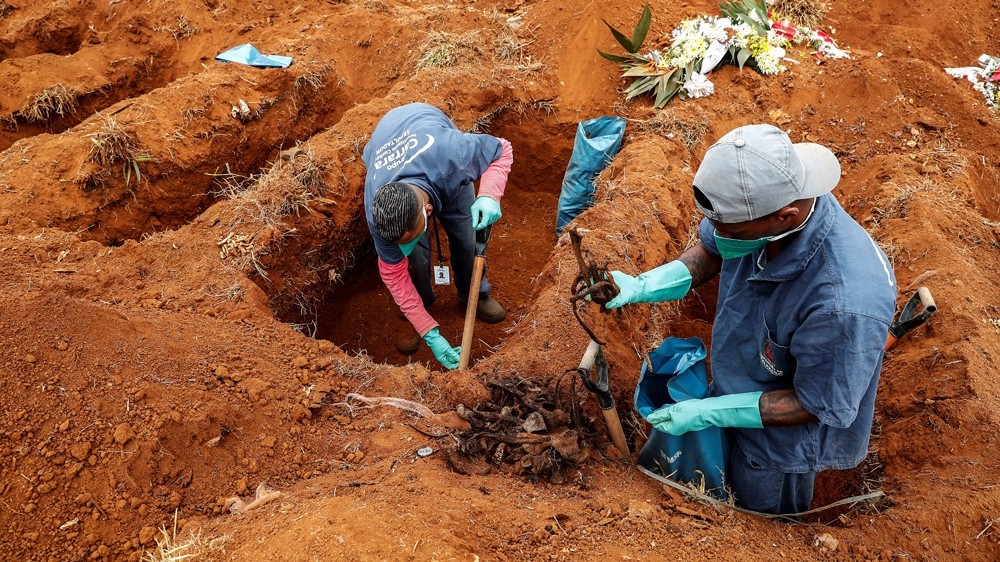 Brazil has recorded a record 34,918 daily cases of coronavirus, on the same day a senior government official said the outbreak was under control.


The WHO has welcomed as “great news” the findings of a University of Oxford study that found dexamethasone, a widely available steroid, helped save the lives of people with severe COVID-19.


More than 8.1 million people have been confirmed to have the coronavirus around the world. Nearly four million have recovered, while approaching 444,000 have died, according to data compiled by Johns Hopkins University. The US has the most cases and deaths, followed by Brazil.

Taiwan will from the start of next week ease border controls put in place to prevent the spread of the coronavirus and will allow in business travellers from some lower-risk countries, though they will have to be tested and quarantined.

Taiwan has never gone into total lockdown and life has continued largely as normal due to its early and effective prevention work and a first-rate public health system.

While it has largely lifted domestic restrictions, Taiwan has been more cautious about opening up its borders, which have been shut to most foreign visitors since mid-March.

Annual inflation rate slid to 0.5 percent in May, remaining at a near four-year low as the country’s coronavirus lockdown dampened prices, official data showed.

The Consumer Prices Index (CPI) annual rate slumped last month from 0.8 percent in April, the Office for National Statistics said in a statement.

Anthony Fauci, a leading member of the White House coronavirus task force, has urged US states including Arizona, Texas, and Florida to move aggressively to prevent recent increases in cases from turning into “a real surge”.

The director of the National Institute of Allergy and Infectious Diseases issued his call after US vice-president Mike Pence, head of the task force, played down the possibility of a “second wave” of Covid-19 cases, saying in a Wall Street Journal column that “such panic is overblown”.

“We are concerned about it but hopefully we can prevent individual blips we are seeing becoming a real surge,” he told the Financial Times. “The critical issue is how we handle and respond to the increases in cases.”

“All you need to do is look at the data, the facts, to see that the pandemic is not over by any means. The numbers speak for themselves,” said Fauci.

Hi, this is Elizabeth Melimopoulos in Doha taking over the live updates from my colleague Kate Mayberry in Kuala Lumpur.

I’m handing over the blog to my colleagues in Doha now.

A quick update on developments over the past few hours.

Beijing is battening down the hatches as it battled a coronavirus outbreak centred on its biggest wholesale food market. Other parts of China are imposing quarantines on recent arrivals from the capital. More politicians have been diagnosed with the virus – including the president of Honduras – and the WHO has welcomed the findings of a study using a widely-available steroid to treat COVID-19.

Pakistan suffered its deadliest day of the coronavirus pandemic so far on Tuesday, recording 140 deaths from the disease, and taking the total number of fatalities to 3,037.

Cases and deaths continue to rise sharply, even as authorities rush to implement so-called “smart lockdowns” – defined areas of strict restrictions within major cities where the infection is spreading rapidly.

Hold off on any travel plans… Australia says it expects its borders will remain closed until next year, although it might ease restrictions on students and other visitors who plan to stay for a longer period of time.

Honduran President Juan Orlando Hernandez says he has coronavirus and will work remotely while he receives treatment.

“As president of the nation, and a responsible citizen, I want to communicate that during the weekend I started to feel more discomfort and today I was diagnosed as having been infected with COVID-19,” he said in a televised speech.

“They have recommended I rest, but I will continue working remotely and through my aides.”

Hernandez wife and two of his aides have also been diagnosed with the disease.  Honduras is one of only a few countries to maintain diplomatic ties with Taiwan, and Foreign Minister Joseph Wu tweeted his best wishes.

My thoughts & prayers are with @JuanOrlandoH & @anagarciacarias at this testing time. My good friend the President of #Honduras is a fighter & will come through this with flying colors. Be strong! JW https://t.co/b0z3H61k0g

The  International Committee of the Red Cross (ICRC) says rising violence and attacks on healthcare facilities have put millions of people in Afghanistan at risk.

“The recent trajectory in Afghanistan is of great concern,” Juan Pedro Schaerer, the head of the ICRC delegation in Afghanistan, said in a statement. “After the hope brought by a relative reduction in hostilities in February and March, we again see more violence. Civilian casualties are on the rise while the country is battling against COVID-19.”

The Red Cross says Afghanistan’s health system was stretched even before the arrival of COVID-19, with limited coverage in conflict-affected areas, and poor specialised healthcare. Attacks against medical staff and health facilities, such as the assault last month on the MSF-supported maternity hospital in Kabul, only made the situation worse it said.

“COVID-19 has challenged the world’s most advanced nations. A country where gunmen attack a hospital stands no chance at providing quality care. We see it in health facilities in conflict-affected areas and in prisons, where people have already limited access to health care,” Schaerer said.

Nurlan Nigmatulin, the speaker of the lower house of Kazakhstan’s parliament, is the latest politician to test positive for coronavirus. He met the country’s healthcare minister, Yelzhan Birtanov, last week before Birtanob was diagnosed with COVID-19 and admitted to hospital with pneumonia.

We’ve been keeping track of the politicians and celebrities diagnosed with the disease, as well as what coronavirus does to people. Read more in the stories below.

Provinces and cities elsewhere in China are responding to the outbreak of coronavirus in the capital.

The semi-autonomous Chinese territory of Macau has just announced a 14-day mandatory quarantine for all people who have been in Beijing in the past two weeks. The measure will come into effect at 12 noon local time (04:00 GMT).

Heilongjiang province in the northeast has introduced a 21-day quarantine for anyone recently arrived from Beijing’s medium and high-risk areas.

The capital has already imposed restrictions on outward travel. That’s led to a sharp drop in flights at its main airports.

500 flights carrying 32,000 passengers will fly into and out of #Beijing Capital International Airport on Wed, which is significantly less than last week, due to a rise in #COVID19 infections; that is, the airport (PEK) saw 901 flights carrying 82,700 passengers last Wed. https://t.co/l9EeIY2PIl

A Japanese study has confirmed the presence of coronavirus in waste water.

Researchers from Toyama Prefectural University, Kanazawa University and Kyoto University tested water at four treatment plants in western Japan and found seven of 27 samples positive for the virus, according to a preprint of the study.

Studies in Australia, the US and Europe have reported similar findings.

New Zealand’s prime minister, Jacinda Ardern, has appointed the military to oversee the country’s borders, after a quarantine bungle.

The country had had 24 days without new cases until Tuesday when two women who’d recently arrived from Britain were found to have the disease.

“My view is that we need the rigour, we need the confidence, we need the discipline that the military can provide,” Ardern told reporters, according to AFP news agency.

Beijing confirmed 31 new cases of coronavirus on June 16, as coronavirus restrictions were tightened across the capital.

The new cases are part of a cluster that originated in the sprawling Xinfadi wholesale food market in the southwest of Beijing. An area around the market has been designated a high-risk zone and quarantined. Other districts have been designated medium-risk with people there required to undergo temperature checks and registration.

Brazil has reported a record 34,918 new coronavirus cases, on the same day that one of the senior officials leading the country’s response to the crisis claimed the outbreak was under control.

Walter Braga Netto, the head of the office of the president’s chief of staff and one of the top officials handling the crisis, said it was under control.

“There is a crisis, we sympathise with bereaved families, but it is managed,” Braga Netto told a webinar organised by the Commercial Association of Rio de Janeiro.

Braga Netto based his claim on deaths-per-million-people, which suggested the country was doing better than many European nations, saying he “was trying to convey a message of optimism in the management of the crisis”.

But Carissa Etienne, who is the director of the Pan American Health Organization (PAHO) said in a video briefing from Washington that Brazil is a major concern.

“We are not seeing transmission slowing down” in Brazil, Etienne said.

Latin America’s largest country accounts for about a quarter of the roughly four million coronavirus cases in the Americas and nearly 25 percent of the deaths, she said.

The WHO has welcomed the findings of a “breakthrough” study on a steroid treatment for people suffering from severe cases of COVID-19.

“This is the first treatment to be shown to reduce mortality in patients with COVID-19 requiring oxygen or ventilator support,” Tedros Adhanom Ghebreyesus, WHO director-general, said in a statement. “This is great news.”

The researchers shared initial insights about the results of the trial with WHO, which will update its clinical guidance on how and when the drug should be used in COVID-19 after receiving more detailed information.

Dexamethasone is a steroid that has been used since the 1960s to reduce inflammation in a range of conditions, including inflammatory disorders and certain cancers.

Read all the updates from yesterday (June 16) here.

Don't Miss it Coronavirus outbreak at B.C. fast-food restaurant a ‘wake-up call’: Henry – BC
Up Next AAP’s Atishi and Akshay Marathe Test Positive for Covid-19