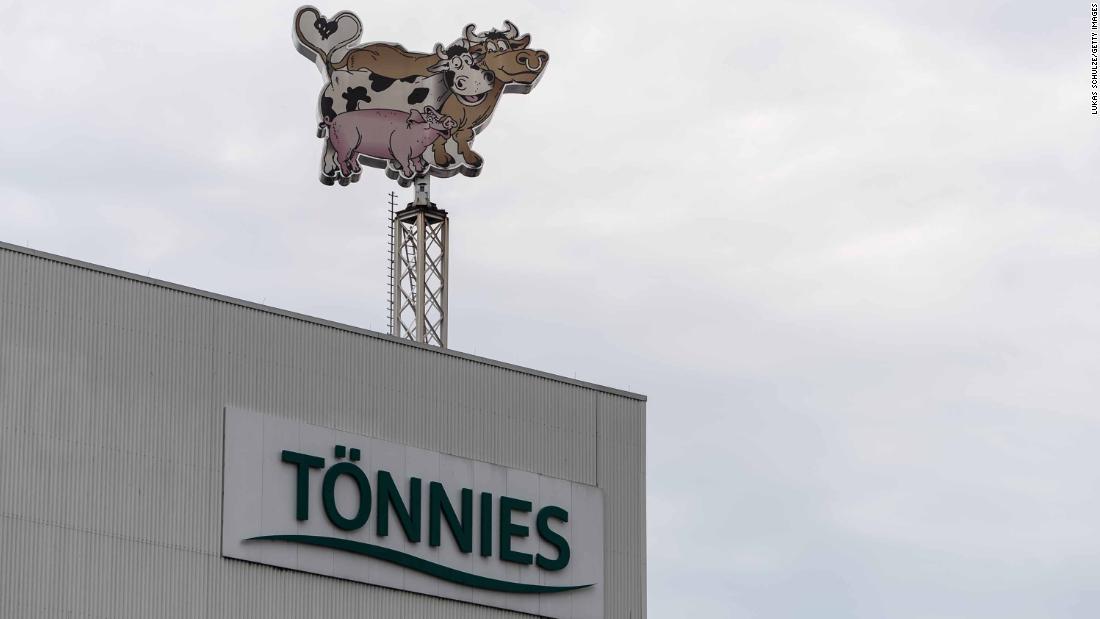 Toennies, the company that owns the meat processing facility in Guetersloh, halfway between Dortmund and Hanover, temporarily shut the plant down on Wednesday afternoon.

Gereon Schulze Althoff, the director of quality management and veterinary services at the company, said the plant had a number of foreign workers who have traveled in recent weeks and might have been carrying the virus with them. He said the workers and their welfare are the priority for the company.

However, he admitted that maintaining social distancing was not easy at the facility. “Our plants have not been built for a pandemic,” Schulze Althoff said at a news conference on Wednesday.

The meat processing industry has been under scrutiny in Germany. Coronavirus outbreaks in plants in Dissen in Lower Saxony and Coesfeld in North Rhine-Westphalia last month shone light on the poor working and living conditions the industry’s predominantly foreign workers are subjected to.

Freddy Adjan, the deputy chairman of Germany’s food industry labor union NGG, said the high number of infections in the plants was a result of a “sick” system that allows companies to use subcontractors to hire cheap labor without taking responsibility for the welfare of their workers. He said the workers have been “ruthlessly exploited” for a number of years.

The meat processing industry employs around 200,000 people in Germany. According to statistics from the Federal Labor Office, roughly a third of the industry’s workers are foreigners.

In reaction to the outbreaks, the German government announced it will bring in new laws to protect the workers. Starting next year, the use of subcontractors will be banned and only workers employed directly by the companies operating plants will be allowed to slaughter and process meat. Fines for breaching the rules on working hours will double from €15,000 ($16,800) to up to €30,000 ($33,700) and there will be additional controls placed on employers providing accommodation for their staff.

North Rhine-Westphalia’s Prime Minister Armin Laschet was criticized after telling journalists that the outbreak in the Toennies plant wasn’t caused by the recent relaxation of the lockdown in the state, but by “Romanians and Bulgarians entering the country with the virus.” He did not provide any evidence for his claim. After German media widely reported on his suggestion, he rowed back on his comments and blamed the outbreak on the cramped accommodation of the workers.

But Germany isn’t the only country that has been forced into a reckoning over the way it treats workers in low-paid jobs. Some of the biggest meat processing plants in the United States had to suspend operations over coronavirus in the past few months. Roughly half all meat-packing plant workers in the US are immigrants.

In the United Kingdom, production was suspended in a poultry processing facility in Llangefni in Wales on Thursday after an outbreak of the disease.

In Canada, at least 600 migrant farm workers have tested positive for Covid-19 since arriving in the country in early spring. The Mexican government has banned its citizens from traveling to Canada for work while it investigates the outbreaks. In Singapore, tens of thousands of migrant workers living in packed dormitories were infected after authorities seemingly overlooked the risk.

In Germany, the local government in Guetersloh closed all daycare centers and schools starting Thursday, but did not impose a general lockdown. “The district of Guetersloh clearly exceeded the critical mark of 50 new infections per 100,000 inhabitants in seven days,” the city’s crisis team said in a statement.

A federal agreement between the German states says that if the rate of new infections surpasses 50 per 100,000 people in seven days, authorities should consider imposing measures to contain the outbreak.

German chancellor Angela Merkel announced Wednesday that a ban on large events in the country will be extended until at least the end of October.

Speaking after a meeting in Berlin with the premiers of Germany’s 16 states, Merkel urged caution as the country moved towards further easing of coronavirus restrictions. Merkel said that physical distancing rules will remain in place across Germany.

Germany has been relatively successful in fighting coronavirus, at least compared to other European states. The country of 83 million people reported 188,604 cases and 8,868 deaths, according to Johns Hopkins University (JHU) on Thursday. Neighboring France, which reported 194,805 cases, has recorded 29,578 deaths on the JHU tally.

Germany was praised for widespread Covid-19 testing and its well-resourced health system even allowed its hospitals to accept patients from other European countries.

But the outbreak in the meat plant raises worries that the situation could worsen. The country has recently lifted some of the harshest restrictions and reopened its borders.

The latest episode from Germany echoes this week’s experiences in Beijing and New Zealand, where authorities appeared to have the epidemic under control but infections have since flared again.

New Zealand declared itself Covid-19-free last week after it had passed 40 days since the last case of community transmission. But earlier this week, two women who arrived from the UK tested positive for the virus. Another person has since tested positive in New Zealand.Similarly, the Chinese capital of Beijing has now reported a new cluster of infections linked to the city’s largest wholesale food market after 56 days without any locally transmitted cases.

Don't Miss it Inside the COVID-19 Commons: Liberals pass key spending before summer sittings
Up Next Coronavirus: Business is booming for Spain's coffin makers | Focus on Europe