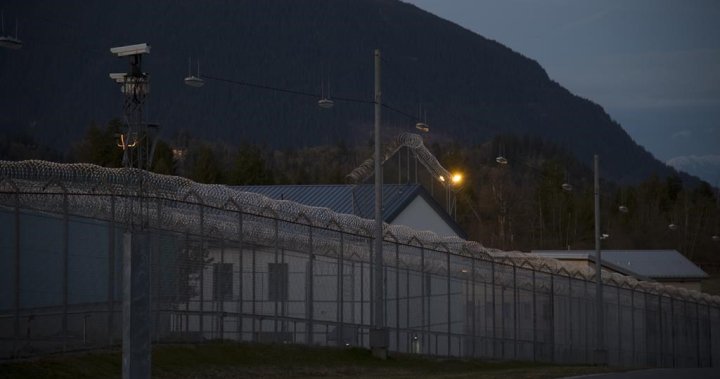 An inmate at the site of the largest federal prison outbreak of COVID-19 in Canada says staff at the facility wasted weeks when responding to the rapidly spreading health crisis, and even slowed progress further to quell rising fears.

The inmate, whom Global News is not identifying so as to ensure his safety, is among the 120 inmates at Mission Institution in B.C.’s Fraser Valley who got infected with the novel coronavirus earlier this year. About a dozen staff members also tested positive before the outbreak was declared over on May 28, and one of the inmates later died of the disease.

The outbreak forced the prison to go into lockdown in early April, which remains largely in place to prevent future cases within the facility.

Although he had a mild case, the inmate said he had trouble breathing and lost his sense of taste and smell. Yet he didn’t learn he was positive until weeks into the outbreak.

“They said they didn’t have enough (tests),” he told Global News. “I kept telling them I was in contact with someone (infected) before the lockdown, and they just wouldn’t give me a test. I was writing requests and just complaining every day.

“They tested me maybe three weeks into it. I tested negative at first, and I asked them for another one and I tested positive.”

As he waited for his test results, he said he watched as inmates around him became infected, often severely.

“Day after day, there were people going to the hospital in my unit,” he said. “They were getting taken out on stretchers. It was pretty serious.”

Despite the growing number of infections, the inmate said staff were slow to put the necessary physical-distancing measures in place. Inmates were still being gathered together in the eating and health-care areas of the prison, he said, which helped the virus spread further.

The inmate said he believes he caught the virus from a correctional officer or a health-care worker who themselves may have contracted it from someone in the prison.

Once the prison was finally locked down — confining inmates to their cells and isolating those who were infected — conditions quickly deteriorated, the inmate said.

“For the first two weeks, they were only giving us two meals a day, and it was at different times so we were hungry all day,” he said. “We also weren’t getting any showers or phone calls. No lawyer calls, nothing.

“Those couple of weeks were really not nice at all, actually. It was like they were treating us like we did something wrong.”

The inmate said he also heard from a correctional officer that before the lockdown, the warden had told staff not to bring in their own personal protective equipment because “they didn’t want to scare us by them wearing it.”

2:31
Calls for faster action to stop COVID-19 spread in prisons

Calls for faster action to stop COVID-19 spread in prisons

Conditions did steadily improve as the lockdown went on, the inmate said.

Meals that were delivered to the inmates’ cells became more consistent, he explained and more precautions were put in place to ensure no contact with staff during those deliveries.

The inmates are also being allowed out for 20 minutes a day for showers and phone calls, when at the start of the lockdown the inmate said they would only be freed for as little as five minutes.

But he said being isolated for most of the day for more than two months has taken a toll on his mental health.


READ MORE:
All inmates at virus-stricken B.C. prison to be tested for coronavirus: Fraser Health

In late April, Canada’s prison ombudsman Ivan Zinger said strict isolation of inmates is a violation of their human rights, even during a pandemic. At the time, he said that prison authorities had flagged about 400 inmates as under some form of medical isolation in facilities across Canada, which Zinger called “deeply concerning.”

The inmate’s account is similar to the one shared with Global News in April by Jennifer Metcalfe, a B.C. lawyer who has multiple clients imprisoned at Mission Institution.

Metcalfe said at the time that she had heard concerns from her clients about a lack of testing, sporadic meals and little to no time for showers or phone calls.

“The whole situation is just totally out of control,” she told Global News at the time, which was less than two weeks after the prison was locked down.

Metcalfe also raised concerns about staff not being given gloves or masks at one point, saying they had only been issued the protective gear “recently.”

The Union of Canadian Correctional Officers spent the early weeks of the outbreak in Mission also voicing concerns about before the gear was finally provided.

Correctional Service Canada has maintained that all necessary health and safety precautions were followed as soon as cases were identified within the prison.

Cleaning was increased in all areas of the facility, officials said, and staff were given strict instructions to limit the transmission of COVID-19.

Officials also insisted that inmates were given three meals a day and ample shower and phone time.

In a statement to Global News following the inmate’s interview, Mission Institution’s assistant warden Sheila Bonn said staff remain in close contact with Fraser Health, the local health authority, on their response and are working with Health Canada on safety measures.

“We are currently transitioning from our medical lockdown to provide more inmate movement within the institution,” Bonn said, adding that all personnel are being provided with masks and that enhanced cleaning measures remain in place.

“Our protocol involves medically isolating inmates who show symptoms of COVID-19, removing them from the general population promptly to prevent the spread of infection,” she said.

According to Fraser Health, no new infections have been reported at the prison since May 1, after providing “extensive consultation on infection prevention and control measures” in April to help contain the disease.