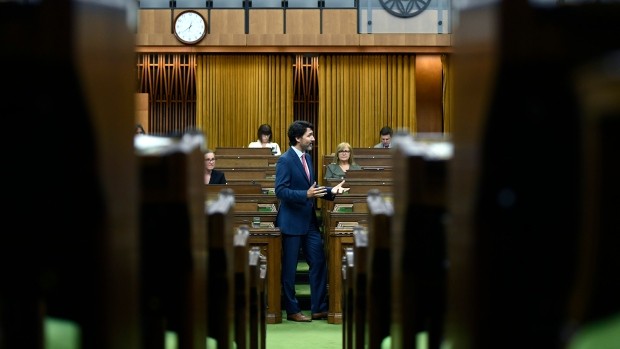 OTTAWA —
The federal government has passed billions of dollars in spending measures during a special House of Commons sitting, with the backing of enough opposition MPs to not prompt formal standing votes.

The conclusion of the special sitting marks the end of more routine gatherings of MPs, with the next time the House convenes set for early July.

Through a series of oral approvals, MPs signed off on approximately $87 billion in funds to tie over federal departments and, in this case, COVID-19 aid programs until the fall. The agreement to pass the funding was given “on division,” meaning no recorded vote was required.

The two spending bills were the first chance since the pandemic shut down the regular sittings for MPs to indicate whether or not they still have confidence in the Liberal minority, though the sitting came and went without that opportunity being taken.

The Liberals’ commitment to an extension of a key COVID-19 aid program, the Canada Emergency Response Benefit, was what secured them the support needed to pass the supplementary estimates — otherwise known as supply or the next cycle of scheduled and new federal spending.

Because of the Liberals’ minority standing, they needed to have the backing of at least one of the other parties in order to pass the spending measures, and the stakes were considerably higher in this instance because any votes that have to do with money, such as the federal budget or the estimates, are traditionally considered confidence votes.

In any parliament, a government lives so long as it maintains the confidence of the House of Commons. This confidence is demonstrated each time a key vote passes.

Approving the funding comes after both the Bloc Quebecois and NDP signalled they were not interested in seeing MPs line up to cast ballots amid a pandemic — which could have happened if the Liberals lost Wednesday’s confidence votes and a snap election was called.

Wednesday’s sitting marked the 40th day there has been some form of an actual of House of Commons sitting in the last year, which did include the usual suspension over the summer of 2019 and then the fall federal election campaign.

Though after that October vote, the Liberals waited until December to reconvene the House.

CTVNews.ca asked Government House Leader Pablo Rodriguez last week about the limited number of sitting days and, as a result, the limited number of government mandate items that have been able to progress. He said the time taken pre-pandemic to adjust to the minority reality was necessary and no one could have anticipated a global health crisis would hit.

“We suggested a very ambitious agenda, a very complete throne speech, with everything that comes with it, and then we had COVID,” Rodriguez said. “But even with COVID, we adapted.”

Prime Minister Justin Trudeau said once again Wednesday that the agreement to sit under the current structure was reached with the backing of the NDP and Greens, and defended the Liberals’ approach to Parliament.

“Three different parties came together to make a determination of what Parliament would do,” Trudeau said.

“Every time something doesn’t go their way an opposition party cries, ‘oh no’ and it’s a dictatorship all of a sudden. It’s sort of irresponsible and it undermines I think the strength of our democracy that we’ve been able to show through this crisis,” said the prime minister during his Rideau Cottage press conference.

SPECIAL COMMITTEE COMING TO AN END

Before the special sitting got underway, MPs held their second last meeting of the special all-party COVID-19 committee of MPs. The committee is the first real experiment with a hybrid parliamentary sitting in the House chamber, but that experiment is nearly over.

As has been the case in the 23 of these meetings so far, MPs offered up statements and riding-specific petitions, before going through a question period-style session where the Liberals were grilled on the shortcomings in their COVID-19 plans and on other key policy matters.

In the motion passed on May 16, which put in place the structure of the summer sittings, MPs voted to cease the special committee after Thursday’s meeting. Its end will also mark the end of some form of MPs meeting four days a week, with them not all together until the first of four special sitting days in July.

As of June 18, the special committee will cease to exist, leaving just the four gatherings— July 8, July 22, Aug. 12, and Aug. 26— before the prospect of a more ‘normal’ House of Commons could convene come Sept. 21.

And as Trudeau announced on Wednesday morning, the July 8 sitting will also be where Finance Minister Bill Morneau will present “an economic and fiscal snapshot.”

One of the major limitations that has yet to be worked out is how to allow MPs to vote remotely.

This question is one that the Procedure and House Affairs (PROC) committee has been diving deeper into and evaluating how a formal hybrid House of Commons session could occur, the rule changes required to allow that, and what it would take to implement a remote voting system. The committee has been given a June 23 deadline to report back to its colleagues.

The government—with the support of the NDP—has argued that Parliament has continued to function through the pandemic, noting that under the new structure, the government has faced more questions from the opposition than it would have under normal House sitting parameters.

However, the Conservatives, and to a certain degree the Bloc Quebecois, have characterized the special committee as essentially a knock-off of Parliament and called for a more robust resumption of sittings that would have allowed for more accountability on the massive government policies being rolled out, while respecting the health and safety of all on Parliament Hill.

So, it remains to be seen whether the recommendations out of PROC could result in a change of plans when it comes to the summer and fall sitting schedule.