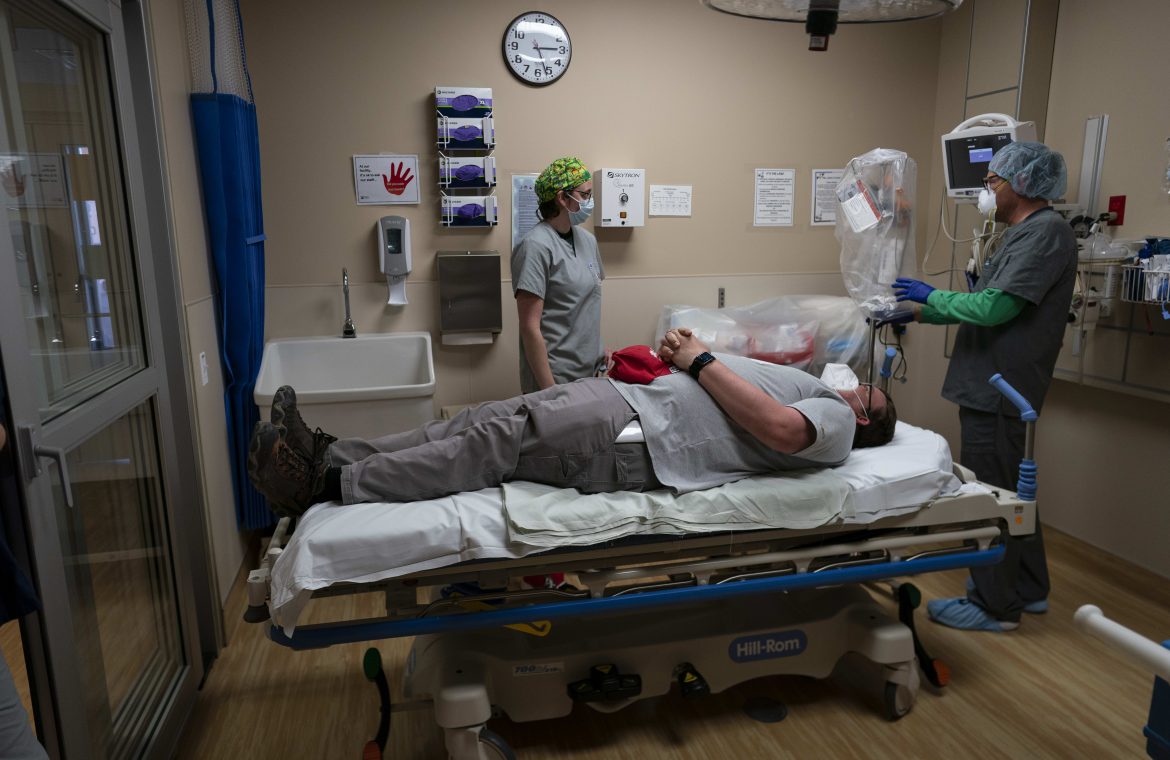 Arizona and Florida reported record spikes in confirmed Covid-19 cases on Friday as states continue their phased reopenings and ramping up testing.

More states are reporting record-setting daily numbers of Covid-19 cases as infections spread at an alarming rate. The Centers for Disease Control and Prevention expanded its list of states where Covid-19 deaths are expected to accelerate over the next four weeks compared with the past four weeks. The list now includes Alaska, Arizona, Arkansas, Hawaii, North Carolina, Oregon, South Carolina and Utah.

While some state and federal leaders have attributed the rise in the number of confirmed coronavirus cases to increase in testing, many are seeing a climb in hospitalizations. This metric, like new cases and deaths, is also considered an important measure of an outbreak because it helps health officials gauge how severe it may be.

Arizona has quickly become one of the hardest-hit areas in the U.S. as new coronavirus cases continue to rise rapidly. Some hospitals in the state are nearing capacity, reporting a record number of patients in ICU beds on Thursday, which accounts for 84% of the state’s capacity.

Ducey also acknowledged that the virus is spreading more quickly than previously thought.

“I said two weeks ago that there is not a trend here,” Ducey said Wednesday evening while presenting a chart of daily new cases across the state. “Looking at the last two weeks of data, there is a trend. And the trend is headed in the wrong direction and the actions we’re going to take are intended to change that direction and reverse this trend.”

To help curb the spread of the virus, the governor announced plans to ramp up testing as well as contact tracing, a process whereby health officials contact infected people to try to identify the source of infection and others who might have been infected.

However, some health officials are concerned that the virus has already reached a level of infection that will be hard to control.

Former Food and Drug Administration Commissioner Dr. Scott Gottlieb tweeted on Friday that Arizona has entered a “period of steep growth in its Covid epidemic.”

Florida added nearly 4,000 new cases on Friday, bringing the state’s total to 89,748 according to data from the Florida Department of Health. The state also reported 3,104 deaths and 12,774 hospitalized patients as of Friday.

Florida was among the first states to reopen, allowing most restaurants and businesses to restart with limited capacity on May 4. The majority of the state is currently in “phase 2” of reopening.

Earlier this week, Republican Gov. Ron DeSantis said the state would not reimplement more restrictions or delay its reopening progress.

“We’re not shutting down. We’re going to go forward. … We’re not rolling back,” the governor said at a news briefing Tuesday. “You have to have society function.”

On Friday, DeSantis said that the median age of those who tested positive for Covid-19 has fallen from 65.5 years old in March to 37 in June.

“That median age is plunging even further,” he said at a news briefing and added that the average will continue to fall. “I think it’s important for people to understand, a lot of the people who are testing positive now are not symptomatic.”

DeSantis said the rise in infection among the state’s younger population is due to “erosion of social distancing.”

“I’m definitely seeing when I’m out and about that people are not necessarily adhering to social distancing guidelines, that they’re not necessarily wearing a mask or wearing it correctly,” said Cindy Prins, an associate professor of epidemiology at the University of Florida.

The governor attributed the increase in cases at least partly to increased testing. While the positivity rate has risen, he said the numbers are different among each demographic.

The state has tested or offered a test to every resident and staff at nursing homes, according to DeSantis. He said the key is to keep the infection rate low among the elderly and those at high health risks.

During the briefing, the governor reassured residents that there’s “plenty hospital capacity.”

“We have twice as much capacity in the hospitals throughout the state of Florida today than before the pandemic began,” he said.

However, despite the increase in the number of tests being administered each day in Florida, the percent of people with positive test results has also increased. In fact, it has doubled since early June.

“If you go back over the last two weeks, I don’t think there’s been a really significant increase in testing on a weekly basis if you add up those numbers, and yet it does seem that we’ve definitely had a jump in cases and people being identified,” Prins said.

“I don’t think you can say at least the week or so of cases is because of an increase in testing, I don’t think that really holds out with the data.”

Don't Miss it Coronavirus Australia latest: the week at a glance | Australia news
Up Next How coronavirus has created a new split in American life | World news