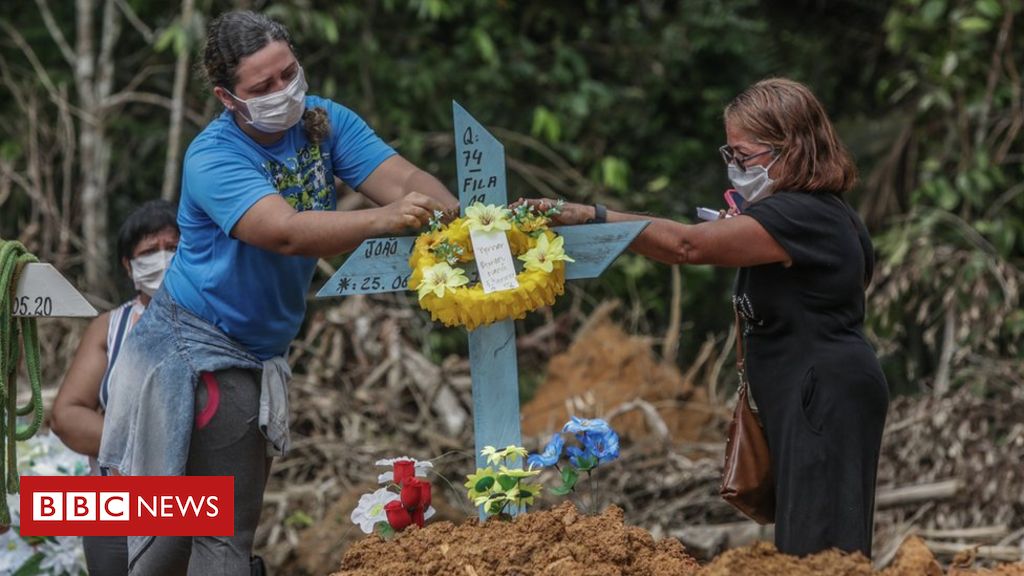 Brazil has become the second country in the world to confirm more than one million cases of Covid-19, as the disease continues to spread.

The health ministry also posted a record number of new cases in the past 24 hours – more than 54,000.

In addition, there were more than 1,200 deaths for the fourth consecutive day, taking the total to nearly 49,000.

A lack of testing suggests the true figures are higher and experts say the outbreak is weeks away from its peak.

Only the US has seen more infections. Brazil’s poorest communities and indigenous people have been particularly badly hit by the pandemic.

President Jair Bolsonaro has been heavily criticised for his response to the crisis. The far-right leader – who initially described the disease as a “little flu” – has repeatedly clashed with state governors and mayors who have adopted strict restrictions to curb the spread of the virus, shutting down major cities.

Mr Bolsonaro argues that the economic impact of the measures will be much bigger than the virus itself, a position shared by many. But his overall approach to the crisis has led to the resignation of two doctors as health minister.

Jair Bolsonaro has long-admired Donald Trump and his way of doing politics. The two men have much in common – not least the way they’ve handled the pandemic in their own countries. The figures in the US are staggering – but Brazil, too, is frightening. They are now exclusive members of a club nobody wants to join.

Such a massive spike in the numbers – even if it was down to inaccurate reporting earlier this week – reveals how out of control the virus still is here. This, at a time when big cities are re-opening and people are returning to work. For a long time, there was a stand-off between President Bolsonaro and state governors – he was angry that they were imposing tough quarantine measures that he said would damage the economy.

But fast forward three months and that pressure from the top seems to have filtered down. With millions of people struggling and out of work, there is a desire to return to some kind of normality. But it feels like a dangerous plan – Brazil hasn’t yet reached its peak.

What is the situation in Brazil?

As there was no national lockdown, states and cities adopted their own measures. After months of restrictions, some are slowly being lifted, even though the infection level remains high.

There is still concern that the health system will be unable to cope in some places, and that the disease is spreading faster in deprived neighbourhoods and remote areas, such as indigenous communities, where access to adequate care is difficult.

At the same time, there is a widespread wish to restart the economy as analysts forecast a contraction between 6% and 8% this year with millions of jobs lost. The government has introduced temporary payments to help people affected by the pandemic but large numbers are expected to be thrown into poverty.

On Friday, Brazil’s health ministry confirmed a total of 1,032,913 cases. It said that the large spike in the number of infections was due, in part, to several states having trouble with reporting data on Thursday.

The US has the world’s highest numbers of cases – more than 2.2 million – and nearly 119,000 deaths, according to Johns Hopkins University, which is tracking the disease globally.

How is President Bolsonaro handling the crisis?

The coronavirus has become a highly political issue in Brazil. Experts say the president’s refusal to follow scientific advice – including those set by the World Health Organization (WHO), such as social distancing – is partially responsible for the severity of the crisis.

At the start, Mr Bolsonaro repeatedly said the risk posed by the virus had been exaggerated, and even joined some anti-lockdown rallies organised by his supporters, undermining the message of his own health ministry against crowds.

Mr Bolsonaro has accused state governors of using the issue for political gain as many who have taken stricter measures oppose his government. João Doria, governor of Brazil’s richest state São Paulo and an ally-turned-rival, has previously described the president’s views on tackling the disease as “Bolsonarovirus”.

The president has also strongly supported the use of hydroxychloroquine for the treatment of patients, a drug the WHO says does not reduce death rates. After two health ministers quit, the government’s response is now being led by an army general who has no experience in public health.

Meanwhile, Mr Bolsonaro and his allies have turned against the media, claiming an excessive focus on the number of victims. The health ministry removed data about the virus from a government website earlier this month, but was forced to reverse the decision after a Supreme Court order and accusations of trying to manipulate the figures.

Amid the pandemic, Mr Bolsonaro is facing a growing political crisis. He is under investigation for allegedly trying to interfere with the police for political motives, which he denies, while the Supreme Court is carrying out two separate inquiries into his allies.

Don't Miss it Coronavirus update: Up to 145,000 COVID-19 deaths possible in United States by July 11, WHO says virus is accelerating
Up Next USA vs China: The new cold war on the horizon | DW Analysis