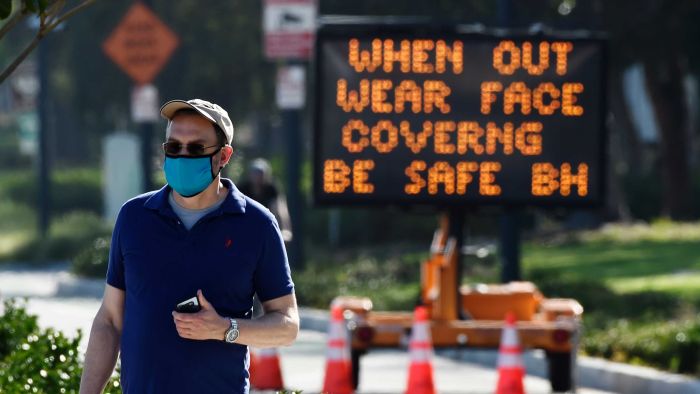 Meanwhile, the World Health Organization (WHO) has warned the virus is “accelerating” and Thursday was the highest single-day rise in cases since the start of the pandemic.

This story was last updated at 10:30am Saturday.

The CDC in the United States has warned the country’s death toll from COVID-19 could hit 145,000 within the next three weeks.

The epidemiological body released graphs today collated from 21 individual national forecasts suggesting there would likely be between 129,000 and 145,000 total reported COVID-19 deaths by July 11.

It singled out several states in which the number of new deaths would likely exceed the number reported over the past four weeks — Alaska, Arizona, Arkansas, Florida, Hawaii, North and South Carolina, Oregon, and Utah.

For other states, the number of new deaths was expected to be similar or decrease slightly compared to the previous four weeks.

Health officials have reported more than 2.2 million cases of the virus in the US and close to 119,000 deaths.

If the forecast is accurate, that will equal up to a further 26,000 deaths in the US over the next three weeks.

WHO issues bleak warning as cases in the Americas rise again

The World Health Organization (WHO) says there were 150,000 new cases of COVID-19 on Thursday, marking the highest single-day rise since the pandemic began.

Nearly half of those cases were confirmed in the Americas as WHO Director-General Tedros Adhanom Ghebreyesus issued a grim warning.

The WHO Director General has issued a new warning as global cases of coronavirus continue to rise.(Reuters: Denis Balibouse)

“The world is in a new and dangerous phase,” Dr Tedros told a virtual briefing from WHO headquarters in Geneva.

“The virus is still spreading fast, it is still deadly, and most people are still susceptible.”

More than 8.54 million people globally have been infected by coronavirus and more than 454,000 have died, according to data from Johns Hopkins University.

Dr Tedros, whose leadership of the WHO has been severely criticised by US President Donald Trump, urged people to maintain social distancing and “extreme vigilance”.

As well as the Americas, a large number of new cases were coming from South Asia and the Middle East, Dr Tedros added.

WHO emergencies expert Mike Ryan drew attention to the situation in Brazil, where he said there had been 1,230 additional COVID-19 deaths in the previous 24 hours.

Brazil has the world’s worst outbreak outside the United States, with 978,142 confirmed cases and 47,748 deaths.

Scientists in Italy have found traces of the new coronavirus in wastewater collected from Milan and Turin in December 2019 — suggesting COVID-19 was already circulating in northern Italy before China reported the first cases.

The Italian National Institute of Health looked at 40 sewage samples collected from wastewater treatment plants in northern Italy between October 2019 and February 2020.

An analysis released late on Thursday said samples taken in Milan and Turin on December 18 showed the presence of the virus.

“This research may help us understand the beginning of virus circulation in Italy,” said Giuseppina La Rosa, an expert in environmental wastewater at the Italian National Institute of Health who co-led the research.

Small studies conducted by scientific teams in the Netherlands, France, Australia and elsewhere have found signs that the virus that causes COVID-19 can be detected in sewage, and many countries are beginning to use wastewater sampling to track the spread of the disease.

Scientists said the detection of traces of the virus before the end of 2019 was consistent with evidence emerging in other countries that COVID-19 may have been circulating before China reported the first cases of a new disease on December 31.

“That COVID-19 could have been circulating in Italy is possible,” said Rowland Kao, a veterinary epidemiology and data science professor at Scotland’s Edinburgh University.

“[This finding] does not on its own, however, tell us if that early detection was the source of the very large epidemic in Italy, or if that was due to a later introduction into the country.”

A study in May by French scientists found that a man was infected with COVID-19 as early as December 27, nearly a month before France confirmed its first cases.

Brazil’s Government has confirmed the country has risen above 1 million confirmed coronavirus cases, second only to the United States.

Of the 150,000 daily confirmed cases the majority of them were in the Americas, where countries including Brazil are struggling to contain COVID-19.(Reuters: Pilar Olivares)

The ministry said the sharp increase was due to corrections of previous days’ underreported numbers.

Brazilian President Jair Bolsonaro was still downplaying the risks of the virus after nearly 50,000 deaths from COVID-19 in three months, saying the impact of social-isolation measures on the economy could be worse than the disease itself.

Specialists believe the actual number of cases in Brazil could be up to seven times higher than the official statistic.

Johns Hopkins University said Brazil was performing an average of 14 tests per 100,000 people each day, and health experts said that number was up to 20 times fewer than needed to track the virus.

Official data show a downward trend of the virus in Brazil’s north, including the hard-hit region of the Amazon, a plateau in cases and deaths in the countries’ biggest cities near the Atlantic coast, but a rising curve in the south.

Swiss drugmaker Novartis is halting its trial of malaria drug hydroxychloroquine against COVID-19 after struggling to find participants, it said on Friday, as data from other studies raised doubts about its efficacy.

Novartis’s move followed the US Food and Drug Administration’s decision this week to revoke emergency use authorisation for hydroxychloroquine against COVID-19, on grounds it was unlikely to help patients.

Britain has lowered its COVID-19 alert level by one notch from four to three as Prime Minister Boris Johnson announced plans every pupil to return to school by September.

“There has been a steady decrease in cases we have seen in all four nations, and this continues,” the chief medical officers of England, Wales, Scotland and Northern Ireland said.

“It does not mean that the pandemic is over.

“The virus is still in general circulation, and localised outbreaks are likely to occur.”

The UK has an COVID-19 official death toll of more than 42,000 people making it one of the worst hit countries in the world, and that figure jumps to over 50,000 based on official data including fatalities where it is mentioned on death certificates.

“The UK moving to a lower alert level is a big moment for the country, and a real testament to the British people’s determination to beat this virus,” Health Secretary Matt Hancock said.

Meanwhile the Mr Johnson announced he expected all school children to be back in classes by September.

Speaking on a school visit in Hemel Hempstead, where pupils sang the Prime Minister happy birthday, the PM said he was “sure we can get it done”.

Some year groups started returning to classrooms this month, but the Government has faced criticism for dropping plans to get all primary pupils back into school before the end of the academic year.

China has declared a coronavirus outbreak in Beijing under control after confirming 25 new cases among tests of about 360,000 people.

Authorities said the number of new confirmed cases of the virus had remained stable in China’s capital.

A Chinese Centre for Disease Control and Prevention (CDCP) official said the number of cases was expected to fall soon in an outbreak centred on Beijing’s main wholesale market.

So far, Beijing has confirmed 183 new cases over the past week, including 25 new cases on Friday, up by four from Thursday (local time).

Wuhan residents trapped in the locked-down city say they are too scared to leave their homes, comparing the experience to living in a horror movie.

The 25 new cases reported on Friday were among 32 nationwide in China, four of them were returned residents from overseas.

Spain is adding more than 1,000 more fatalities to its coronavirus death toll in the first update in nearly two weeks after officials revised a backlog of inconsistent data.

At least 28,313 people have died through Friday with a COVID-19 diagnosis, health officials — authorities had stopped updating the tally at 27,136 on June 7.

The death toll in Spain has been revised up.(AP: Manu Fernandez)

The country has also confirmed more than 244,000 infections since the beginning of the outbreak, although an official immunisation survey estimates that 5 per cent of its 47 million inhabitants are presumed as having contracted the virus.

Spain’s health minister says that 34 clusters have been detected in the past six weeks, since Spain began to relax its confinement rules.

The new clusters have infected around 1,000 people in slaughterhouses, nursing homes, hospitals, as well as among migrant workers and party-goers.

US renters to be faced with evictions

A torrent of evictions looms as US coronavirus lockdowns are lifted, putting millions of people, often in black communities, at risk of losing their homes, housing researchers and activists have warned.

Many states have halted evictions since mid-March, as the novel coronavirus spread rapidly, but such provisions are scheduled to end in the coming months as the country reopens.

Evictions were halted in several US states at the height of the pandemic.(AP: Andrew Harnik, file)

“There’s every reason to expect that this will result in a pretty serious rental market housing crisis,” said Peter Hepburn, a research fellow at the Eviction Lab, a research group at Princeton University in New Jersey.

“Renters already put a lot of their income toward paying rent, and many of them have very limited savings, if anything, to help them weather this crisis,” he said.

At least 29 million people in the United States are collecting unemployment checks, according to the Labor Department, as people suffered record job losses in recent months.

Evictions typically hit black communities hardest, data shows — an illustration of the inequality fuelling the protests over race and policing that have beset the United States for weeks, activists say.

Black renters faced eviction filings by landlords at nearly twice the rate of white renters, according to an analysis of national data from 2012 to 2016 by the American Civil Liberties Union.

The Czech Republic reported its biggest one-day jump in new coronavirus cases in two months on Friday, with the rise exceeding 100 for only the third time since mid-April.

The number of new cases was 118 on Thursday, the Health Ministry said, the largest daily rise since April 21.

The central European country has since May been relaxing lockdown rules, with more easing planned from Monday.

Health Minister Adam Vojtech said the jump was caused by more cases in eastern localities, which have been identified as a hotbed, together with the capital Prague.

He said a number of cases were found in a nursing home.

“To these localities, the relaxation of measures planned for June 22 won’t apply, visits to medical and social facilities will be limited and compulsory testing of staff will be reinstated,” Vojtech said on his Twitter account.

The Czech Republic had reported 10,283 cases as of Friday morning, of which almost three quarters have recovered.