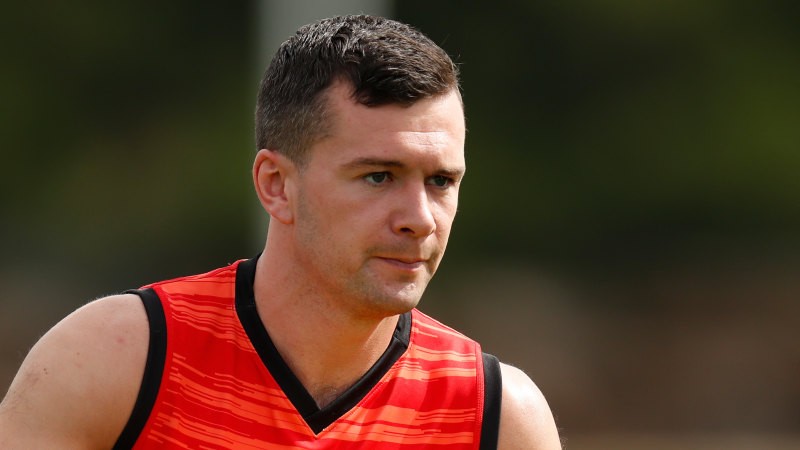 Three players – two Melbourne (Kysaiah Pickett and Charlie Spargo) and one Essendon (Brandon Zerk-Thatcher) have been suspended for breaches.

An assessment from DHHS will shape whether Essendon plays Carlton next weekend.

The AFL did not know on Saturday whether the Bombers would be able to play the Blues next Saturday following McKenna’s asymptomatic positive on the same day, with a decision expected in the coming two days once the DHHS has reviewed the risks and decided how many players and officials were deemed to be in close contact with the infected player, with contact tracing to take place.

“It will depend on the close contacts [McKenna has had] and the advice of the DHHS,” AFL CEO Gillon McLachlan said on Saturday.

It is not yet known how McKenna contracted the virus, except the view was that it was in recent days. He will now be quarantined for 14 days.

Essendon’s training base at Tullamarine has been closed and will undergo extensive cleaning.

“We said at the outset of this crisis that we would make all decisions based on medical advice,” McLachlan said.

The news, broken by the Sunday Age on Saturday afternoon, came on the same day the Victorian government tightened restrictions. The DHHS declined to comment on the McKenna test.

“We need to do the right thing. The right thing for our clubs and community is to postpone this game between Essendon and Melbourne,” McLachlan said.

The league CEO said the rigorous testing protocols in place by the AFL had meant the system had worked.

“There have been more than 13,000 tests, this is the first positive,” McLachlan said.

Essendon players immediately went into quarantine at home following the positive test to their team mate, whom the AFL said is believed to have contacted the virus in recent days, having tested negative as recently as Wednesday, the fifth negative test since he returned from Ireland.

Essendon players and officials will be tested in the coming days, with a decision made on when it is safe for Essendon to train and then play next determined by DHHS and the state’s chief medical officer.

The assumption of the AFL was that Carlton would be forced to have a bye if the game was postponed. Sunday’s Essendon v Melbourne game was postponed by the AFL after McKenna’s positive result was confirmed in a second test around midday on Saturday.

The AFL said there would be no impact on North Melbourne – which had travelled in the same plane to Sydney as the Bombers last weekend. McKenna had not played or travelled last weekend and had tested negative then, so his teammates were not at risk then and therefore North players and officials – and their opponents Sydney – were viewed as not at risk.

The AFL faces the prospect of revamping the fixture in the event that next weekend’s Bombers v Blues game is called off, though Sunday’s games will go ahead in different time slots. The AFL did not have any view on when the postponed Essendon-Melbourne game would be played.

McKenna’s situation also calls into question how clubs manage contact training and even whether it is advisable to continue with such training this season.

The presence of the virus – described by McLachlan as “an irregularity” – had been detected by testing agency Dorovich on Friday morning, prompting a second test on Saturday in which the Irishman was positive for COVID-19, the first player to test positive this season.

McKenna had trained in a full contact session with the team on Friday, but not on Saturday – and AFL officials said it would be up to DHHS to decide the risks and the path forward.

AFL head doctor Peter Harcourt was first notified of the irregularity and then the positive test, with McLachlan subsequently informed by AFL head counsel Andrew Dillon.

McLachlan said that the league will work with authorities and follow all protocols.

“At the moment all players and football department staff at the club have been asked to isolate until that work has been done with the health department.

“We said the outset we needed to be flexible and agile, and that’s what we are going to be,” he said.

“This is a reminder we are going to have to be on our toes at all times.”

He said all AFL protocols would be revised as a result of the positive test, including whether the restrictions he had eased for all players last week needed to recalled. This move had allowed players more freedom, including to go surfing and to play golf.

CEO Xavier Campbell said the club would support McKenna and those around him.

“The AFL and Department of Health and Human Services were notified immediately per the protocols. We will continue to work with the DHHS and the Chief Health Officer’s team, as well as the AFL over the coming days to seek further details,” Campbell said.

“We are also working with the department to identify those who they deem to have been in close contact with Conor and isolate them.

“The priority is also to provide our full support for Conor and ensure his health and welfare during this difficult time for him.

“We will continue to provide our full support for our remaining players and staff.”

The postponing of the clash at the MCG has seen the remaining fixtures on Sunday rejigged. The clash between the Gold Coast Suns and Adelaide Crows will now be televised on Seven in Melbourne at 3.05pm, while the match between Port Adelaide and Fremantle on Fox Footy will be held at 8.10pm.

McLachlan said he did not know when the Demons and Bombers’ match would go ahead.

“What we know is that we have time and flexibility, whether we compress the season or it ends up being a bye. However, that looks. We are still working with the West Australians about how a return looks like there so it will go into the mix,” he said.

The West Coast Eagles are keen to return home from their hub on the Gold Coast as soon as their initial four-week stint is finished but that remains problematic because of Western Australia’s hard border controls. The AFL had been due to release a revised fixture, at least for round six, this week.

Jake Niall is a Walkley award-winning sports journalist and chief AFL writer for The Age.

Sam McClure is a sport reporter for The Age and winner of ‘best news reporter’ at the AFL Media Association awards.

Jon Pierik is cricket writer for The Age. He also covers AFL and has won awards for his cricket and basketball writing.

Most Viewed in Sport

Don't Miss it End of coronavirus lockdown in sight with pubs open, family sleepovers and all kids back in school as 2m rule to be cut
Up Next Local officials hit roadblocks on the way to enacting measures to curb coronavirus spikes