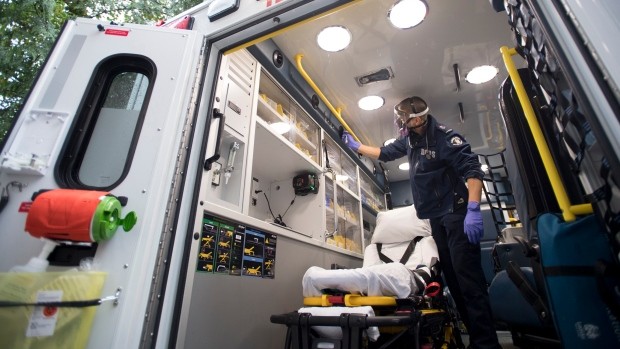 TORONTO —
“Excess death” statistics have been used in some parts of the world to suggest the true toll of COVID-19 is much higher than what has officially been recorded, and the latest data suggests that the same trend could be playing out on a smaller scale in Western Canada.

Put simply, excess deaths are the number of deaths recorded in an area during a period above and beyond what would be considered normal for that place and time.

New York City recorded 24,000 excess deaths between March 11 and May 2. The city’s official COVID-19 death toll during that period was less than 19,000, leaving more than 5,000 deaths unexplained. American authorities have theorized that many of those deaths could also be related to the novel coronavirus, perhaps occurring in people who were never tested for it.

Recent reports have also found high totals of excess deaths in locations including Mexico and the U.K., all of which exceed the reported number of deaths related to COVID-19.

Statistics Canada made its first attempt to determine the number of excess deaths in the country during the pandemic in mid-May. The initial report was based on limited data, only covered the time period up to March 31 – when fewer than 100 deaths had been linked to COVID-19 by the Public Health Agency of Canada – and excluded two provinces and two territories altogether.

StatCan was unable to find any evidence of substantial excess deaths at that time, although the agency noted that its conclusions were subject to change given that it was working with such a small pool of information.

New data was released Friday, covering much more of the pandemic – up to May 2. In this report, StatCan found evidence of excess deaths in Quebec, Alberta and British Columbia – three of the four provinces that have reported the most deaths due to COVID-19. The fourth, Ontario, was not included in the report due to insufficient data.

In Quebec, COVID-19 explains all of the excess deaths and many more. StatCan found that between March 28 and May 2, there were 1,472 more deaths in the province than in the same time period in any of the previous five years. However, the province reported 2,132 deaths related to COVID-19 during the same period.

That leaves Alberta and B.C. as the two provinces where an abnormal and significant number of deaths cannot be explained, leaving open the possibility that they represent undetected COVID-19 deaths.

In B.C., StatCan found that the number of deaths between March 15 and April 25 was 372 higher than it had been during any of the previous five years, although only 99 deaths were attributed to COVID-19 during this time.

The discrepancy was even larger in Alberta, where 40 deaths linked to COVID-19 were found between Feb. 23 and April 11 but a total of 402 excess deaths were recorded.

These disparities do not necessarily mean that either province experienced hundreds of deaths connected to COVID-19 without realizing it, StatCan said, as other factors can contribute to excess deaths.

Excess death numbers in Alberta, B.C. and Quebec suggested that both men and women were dying at higher rates than expected in those provinces, StatCan said, while those over the age of 85 appeared to be disproportionately represented in the data.

The agency said it will continue to report on excess deaths as new data becomes available, and expects future reports to include more information about officially listed causes of deaths.