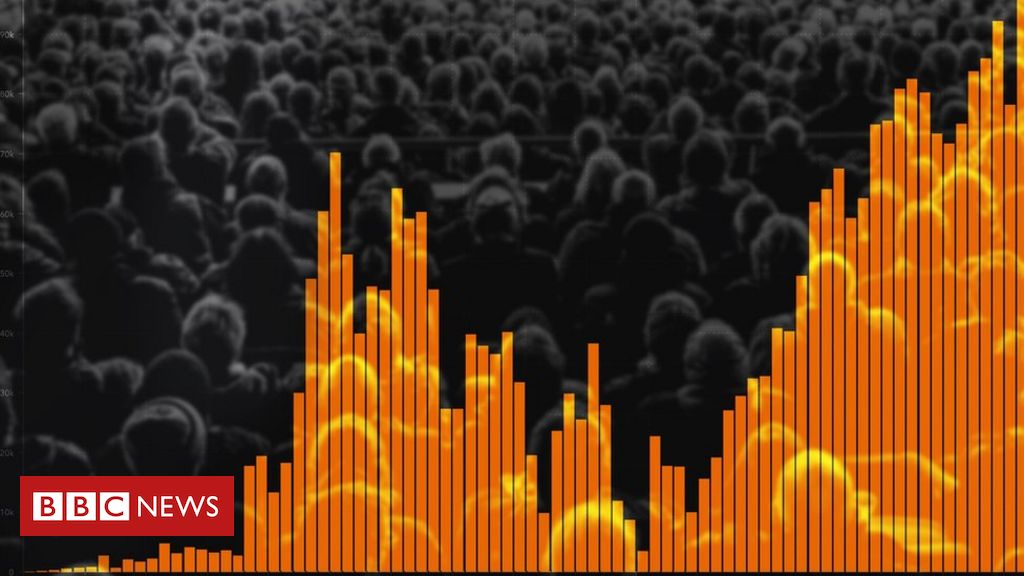 Coronavirus is far from over. Some countries are still dealing with large epidemics, but even those currently controlling the virus fear “the second wave”.

The second phase of Spanish flu a century ago was deadlier than the first.

So, is a second wave inevitable? And how bad could it be?

Firstly, what is a second wave?

You can think of it like waves on the sea. The number of infections goes up and then comes back down again – each cycle is one “wave” of coronavirus.

Yet, there is no formal definition.

“It’s not particularly scientific, how you define a wave is arbitrary,” Dr Mike Tildesley, from the University of Warwick, told the BBC.

Some describe any rise as a second wave, but it is often a bumpy first wave. This is happening in some US states.

To say one wave has ended, the virus would have been brought under control and cases fallen substantially.

For a second wave to start you would need a sustained rise in infections. New Zealand, which has its first cases after 24 days without coronavirus, and Beijing which is facing an outbreak after 50 virus-free days are not in this position.

But some scientists argue Iran may be starting to meet the criteria for a second wave.

Will a second wave come to the UK?

The answer lies almost entirely with the decisions we make so it could go either way.

“I really think at the moment there’s huge uncertainty… but to be honest it’s something I’m very concerned about,” says Dr Tildseley.

The potential is clearly there – the virus is still around and it is no less deadly or infectious than at the start of 2020.

Only around 5% of people in the UK are thought to have been infected and there is no guarantee they are all immune.

“The evidence is the vast majority of people are still susceptible, in essence if we lift all measures we’re back to where we were in February,” says Dr Adam Kucharski from the London School of Hygiene and Tropical Medicine.

What could trigger a second wave?

Lockdowns have caused massive disruption around the world – destroying jobs, affecting people’s health and taking children out of school – but they have controlled the virus.

“The ultimate puzzle is how to maintain control, while minimising daily disruption,” says Dr Kucharski.

That is why measures are being lifted in stages and new ways of controlling coronavirus are being introduced, such as contact tracing or face-coverings.

People shopping in Norwich as lockdown is eased in the UK

“In the UK and neighbouring countries, flare-ups could happen quite quickly if measures are lifted beyond the point transmission is controlled,” says Dr Kucharski.

This is already starting in Germany where 650 people have tested positive for the virus after an outbreak at an abattoir.

It is not a major problem if clusters can be rapidly identified, local lockdowns introduced and spread of the virus stopped.

Otherwise, they contribute to a second wave.

South Korea, which has been widely praised for its handling of the coronavirus, has had to re-impose some restrictions due to such clusters.

Will a second wave be the same as the first?

Something will have gone seriously wrong if it does.

The value of R – the number of people each infected person passed the virus to on average – was 3 at the start of the pandemic.

It meant the virus was spreading fast, but our behaviour has changed, we’re social distancing, and it’s hard to see how R will get that high again.

Dr Kucharski told the BBC: “No country is going to just lift everything and go back to normal.

“Even countries without control of coronavirus – like Brazil and India – don’t have an R of 3.0.”

If cases did start to grow again, it is likely to be relatively slow.

However, a second wave could, theoretically, still end up bigger than the first because so many people are still susceptible.

“[But] if cases climb again we can reintroduce lockdown to suppress a second wave, that’s always an option available to us,” says Dr Tildseley.

When will a second wave happen? Will winter make it worse?

Dr Kurcharski says local flare-ups could be seen in “even the coming weeks or months” as measures are lifted.

But that does not mean a guaranteed second wave.

Dr Tildseley says: “If measures are relaxed significantly, we may end up with a second wave in late August or early September.”

Winter may be a crucial time as other coronavirus do spread more readily then.

If we were only just controlling the virus, even a small seasonal-boost could lead to the virus spreading.

“Spring undoubtedly helped us,” Prof Jonathan Ball, a virologist at the University of Nottingham says.

“A second wave is almost inevitable, particularly as we go towards the winter months.

“The challenge for government is to ensure the peak isn’t so much that it overburdens the healthcare system.”

Will the virus become milder and no longer a problem?

One argument against a deadly second wave is viruses become less dangerous as they evolve to better infect people.

Even HIV seems to be getting milder. The theory goes that viruses will spread further if they don’t kill their host and so become milder.

“But it’s not guaranteed, it’s a bit of a lazy thing some virologists trot out,” says Prof Ball.

It is also something that takes place over long periods on time. More than six months into the pandemic there is no clear evidence the virus has mutated to spread more easily or be less deadly.

Prof Ball adds: “I think the virus is doing very well at the minute. People often have very mild or symptomless infection, if they can transmit then there is no reason to imagine coronavirus needs to become milder.”

Don't Miss it Trump says he asked for coronavirus testing to be slowed down because there were so many cases
Up Next Brazil coronavirus death toll nears 50,000: Live updates | News