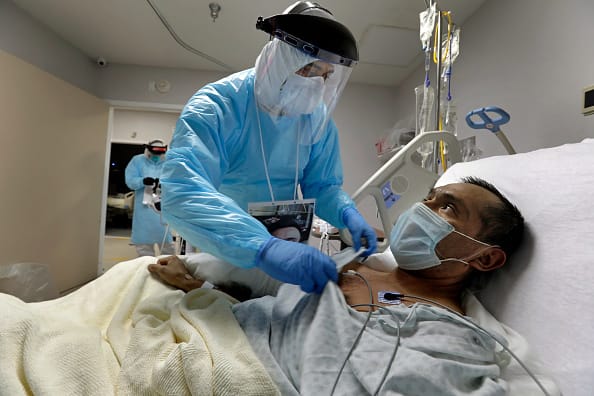 The average number of people currently hospitalized with Covid-19 has grown in states such as Texas and Arizona as the nation’s number of cases continues to gain since mid-June.

As of Sunday, the nation’s seven-day average of new Covid-19 cases increased more than 24% compared with a week ago, according to a CNBC analysis of Johns Hopkins University data. Cases are growing by 5% or more in 25 states across the U.S., including Arizona, Texas, Florida and Oklahoma.

Hospitalizations due to Covid-19 were growing in 14 states as of Sunday, according to a CNBC analysis of data compiled by the Covid Tracking Project. Coronavirus hospitalizations, like new cases and deaths, are considered a key measure of the outbreak because it helps scientists gauge how severe it may be.

States like Texas have recently reported record-breaking spikes in hospitalizations. There have been 2,913 people currently hospitalized in Texas with Covid-19 based on a seven-day moving average, a 37% increase compared with a week ago, according to data from the Covid Tracking Project.

Arizona reported 1,702 people currently hospitalized on a seven-day average, a near 29% increase compared with a week ago. As of Saturday, the Arizona Department of Health Services reported that 83% of inpatient beds and 85% of intensive-care unit beds were in use.

Both Arizona Gov. Doug Ducey and Texas Gov. Greg Abbott have pointed to the ability of their states’ hospitals to activate surge capacity if additional beds are needed.

Last week, Ducey issued an enhanced Covid-19 action plan to contain the virus’ spread in the state, including additional awareness of social distancing and face-covering guidelines.

He also announced new policies that allow local officials to require that residents wear masks and follow social distancing rules in public and at businesses.

“I said two weeks ago that there is not a trend here,” Ducey said on June 17 while presenting a chart of daily new cases across the state. “Looking at the last two weeks of data, there is a trend. And the trend is headed in the wrong direction and the actions we’re going to take are intended to change that direction and reverse this trend.”

Florida, Texas, Arizona and other states seeing major spikes in new coronavirus cases are heading into a “pivotal week” that might determine whether “they’re tipping over into exponential growth or not,” former Food and Drug Administration Commissioner Dr. Scott Gottlieb told CNBC on Monday.

In Florida, the state’s seven-day average of new Covid-19 cases increased nearly 87% compared with a week ago, according to Hopkins data. Research shows that it can take anywhere from five to 12 days for people to show symptoms from the coronavirus, which could delay reporting.

Gov. Ron DeSantis said Saturday that the share of people who test positive is accelerating faster than the number of tests being run. The percentage of people testing positive for the virus in Florida has risen from about 4.2% on June 7 to more than 8% on June 14, the most recent data available, according to the Florida Department of Health.

Florida was among the first states to reopen, allowing most restaurants and businesses to restart with limited capacity on May 4.

“We’re not shutting down. We’re going to go forward. … We’re not rolling back,” DeSantis said at a news briefing last week. “You have to have society function.”

Scott Gottlieb is a CNBC contributor and is a member of the boards of Pfizer, genetic-testing start-up Tempus and biotech company Illumina.

Don't Miss it Essential poll: majority of Australians expect second wave of Covid-19 infections | Australia news
Up Next Why doctors say UK is better prepared for a second wave of coronavirus | World news