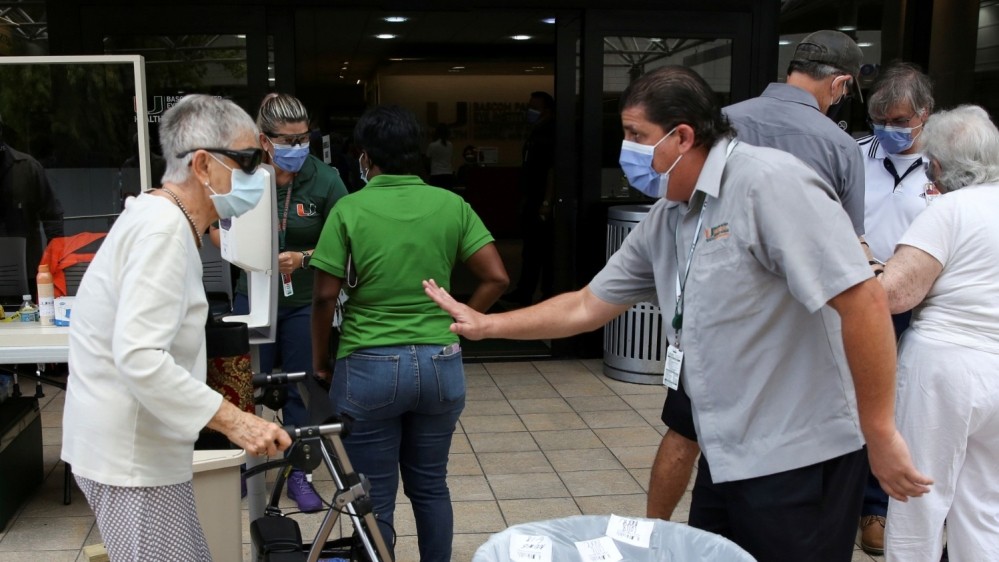 A former US Food and Drug Administration commissioner has warned that some US states, including Texas, Florida and Arizona, could start to see an “exponential” rise in coronavirus cases this coming week. Commissioner Scott Gottlieb sounded the alarm as the US death toll hit 119,969, according to the Johns Hopkins University tally.


The World Health Organization reported a record increase in global coronavirus cases, with the total rising by 183,020 in a 24-hour period. The biggest increase was from North and South America with more than 116,000 new cases, according to a daily WHO report on Sunday.


Brazil, the world’s No 2 coronavirus hot spot after the United States, officially passed 50,000 coronavirus deaths, with 50,617 death toll as of the end of Sunday. It has 1,085,038 total number of cases, according to the country’s health ministry.


Worldwide, at least 8.9 million people have been confirmed to have the coronavirus, At least 4.4 million have recovered, while more than 466,000 people have died, according to Johns Hopkins University.

Barber Josue Yacahuanca fastens a haircutting apron emblasoned with an image of salsa singer Hector Lavoe on a resident on the top of a hill in the San Juan de Lurigancho neighborhood of Lima, Peru on Friday [Martin Mejia/AP]

Amid the coronavirus lockdown in Peru, barber Josué Yacahuanca is offering some hope to residents of some of the poorest neighbourhoods in the capital, Lima.

Once a week, Yacahuanca seeks out clients devastated by the pandemic and the nearly 100 days of lockdown, giving haircut for free.

“I want them to look in the mirror and see a bit of hope,” Yacahuanca told the Associated Press news agency. At 21 years old, he is already considered a veteran barber having started cutting hair at 13.

He said that when he looks at the children in the neighborhood, he sees himself when he was growing up.

Peru has been one of Latin America’s hardest hit by recession brought on by the virus outbreak. As of the end of Sunday, Peru has reported more than 251,000 cases with 7,861 deaths due to the coronavirus.

About 150 seasonal workers hired by a salmon cannery in Alaska are being forced to quarantine without pay at a hotel in Los Angeles after three of them tested positive for the coronavirus, the Associated Press news agency reported quoting a news report.

The workers, most of them from Mexico and Southern California, were hired June 2 by North Pacific Seafoods to work at its Red Salmon Cannery in Naknek, Alaska, through August, according to the lawsuit filed Friday in San Francisco Superior Court, the Los Angeles Times reported.

Instead, they have been stuck at the Crowne Plaza LAX Hotel since June 10, attorney Jonathan Davis said.

Leauri Moore, vice president of human resources for North Pacific Seafoods, told the newspaper in an email that she had not seen the lawsuit and could not comment.

Fresh air, a diet of free-range milk and meat, plus Genghis Khan’s fighting spirit are among those being cited by Mongolians as the reasons why the country has managed to fight off the spread of the coronavirus pandemic, according to a South China Morning Post report.

In a series of interviews with the Hong Kong-based publication, a historian, a shaman, a monk, and a medical doctor all referenced Genghis Khan, the conqueror and leader of the Mongolian Empire during the 12th and 13th centuries, saying that they have learned to live and eat simply like him, “and do not experience the stress and consumerism” by people from other countries.

Dr Chinburen Jigjidsuren, a special health adviser to the prime minister, was also quoted as saying that the government learned from Genghis Khan the art of clear communication keeping the public informed and prevented panic in dealing with the pandemic.

As of Monday, Mongolia has at least 206 coronavirus cases, all imported, and zero deaths.

More and more Malaysians are complaining about their weight gain during coronavirus lockdown in the country starting in mid-March, the Kuala Lumpur based The Star reported.

The newspaper said the development “was not really a surprise” considering that many have become homebound and less active physically.

“Some even chose not to share their most recent photographs on their social media accounts to avoid receiving criticism from their friends,” the report said.

Even before the pandemic, obesity was already a health concern in Malaysia. According to the World Population Review 2019, Malaysia has the highest prevalence of obesity among adults in South-East Asia at 15.6 percent.

The National Health and Morbidity Survey (NHMS) 2019 findings, meanwhile, showed that 50.1 percent of adults in Malaysia were either overweight or obese – 30.4 percent were overweight and 19.7 percent obese.

China reported 18 new coronavirus cases for June 21, 9 of which were in the capital Beijing, Reuters reported on Monday quoting the National Health Commission. Another seven cases are categorised as asymptomatic.

This compared with 26 confirmed cases a day earlier, 22 of which were in Beijing. Local authorities are restricting movement of people in the capital and stepping up other measures to prevent the virus from spreading following a series of local infections.

Seven asymptomatic COVID-19 patients were also reported – those who are infected but show no symptoms, were reported as of June 21 compared with six a day earlier.

The country added 17 new cases, including 11 local infections, raising the total number of cases to 12,438, according to the Korea Centers for Disease Control and Prevention (KCDC). There were also six additional imported cases, raising the total to 1,441.

This was the first time since May 26 that the number of new daily COVID-19 cases fell below 20. It also marks a sharp drop from 67 cases Saturday and 48 cases Sunday, KCDC added.

There were no additional deaths, keeping the total death toll to 280.

Beijing’s municipal health authority reported on Monday nine new cases of the coronavirus in the city for June 21, down from 22 a day earlier.

The city of more than 20 million people reported its first case in the latest wave on June 11.

The resurgence has been linked to a wholesale food centre in the southwest of Beijing. So far, 236 people in the city have been infected in the outbreak.

New York City’s effort to stop the spread of the coronavirus through contact tracing has been hampered by the reluctance of many people who are infected with the virus to provide information to tracers, according to a report in The New York Times.

The Times report said just 35 percent of the 5,347 city residents who tested positive or were presumed positive for COVID-19 in the first two weeks of the contact tracing program gave information about their close contacts.

Perry N Halkitis, dean of the School of Public Health at Rutgers University, called the 35 percent rate for eliciting contacts “very bad”, adding that it should be closer to 75 percent.

Dr Ted Long, head of New York City’s new Test and Trace Corps, defended the programme and said 69 percent of the people who complete an interview provide contacts. “We think that’s a strong start but we also do want to get that number up,” Long told The Associated Press news agency.

As a vote by Major League Baseball players on whether to accept the owners’ latest proposal to play the 2020 season continues to be delayed, a USA Today report surfaced that a large of positive COVID-19 tests is the main reason for the delay.

According to Nightengale, the recent uptick in COVID-19 infections will push the start of the season back to July 26 at the earliest, with spring training resuming no earlier than June 29. The owners and players had previously agreed to restart the season on July 19, according to Reuters News Agency.

Mexico has reported 5,343 new infections and 1,044 additional deaths from the coronavirus that causes COVID-19, the health ministry said, bringing the totals for the country to 180,545 cases and 21,825 deaths.

The government has said the actual number of infected people is likely significantly higher than the confirmed cases, Reuters News Agency said.

Mexico will resume sending temporary farm workers to Canada after the two countries reached a deal on improved safety protections for labourers on Canadian farms during the coronavirus pandemic, Reuters News Agency reported.

Mexico’s Foreign Ministry said in a statement that the Temporary Agricultural Workers Program (PTAT) had “entered into operation once again after a temporary pause.”

Mexico said last Tuesday it would pause sending workers to farms with coronavirus infections after at least two of its nationals died from COVID-19 after outbreaks on 17 Canadian farms.

Canadian farmers rely on 60,000 short-term foreign workers, predominantly from Latin America and the Caribbean, to plant and harvest crops.

You can find all the key developments from yesterday, June 21, here.