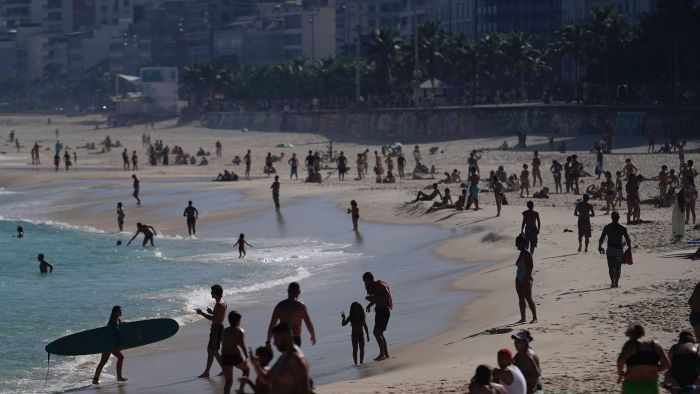 The World Health Organisation is urging world leaders to unite and fight the pandemic as cases surpass 9 million worldwide.

Brazil saw 50,000 deaths over the weekend as local governments lift restrictions, while South Korean authorities have confirmed a second wave of COVID-19. Meanwhile a survey of businesses from 132 countries reveals one in five small and medium-sized firms could close within three months.

This story was last updated at 5:40am on Tuesday.

World leaders must not politicise the coronavirus pandemic but unite to fight it, the head of the World Health Organization has warned, as a grim milestone is reached amid a large rise in infections in Brazil, Iraq, India and the southern and western US states.

Doctor Tedros Adhanom Ghebreyesus, who has faced criticism from US President Donald Trump, said the pandemic was still accelerating and producing record daily increases in infections.

It took more than three months for the world to see 1 million virus infections, but the last 1 million cases have come in just eight days, Dr Tedros said during a videoconference for the Dubai-based World Government Summit.
However, he said the great threat was the politicising of the pandemic.

“The greatest threat we face now is not the virus itself, it’s the lack of global solidarity and global leadership,” Dr Tedros said. “We cannot defeat this pandemic with a divided world.

More than 9 million people have been infected by the virus worldwide and more than 468,000 have died, according to figures compiled by Johns Hopkins University.

Experts say the actual numbers are much higher, due to limited testing and asymptomatic cases.

Brazil’s Health Ministry said on Monday an additional 21,432 confirmed cases of the virus and 654 new deaths had been registered in the previous 24 hours.

A day earlier, swimmers and sunbathers packed Rio’s famous beaches, with many neither wearing masks nor respecting the WHO’s guidance to maintain at least 1 metre of distance between people.

As the toll climbs in Rio, the state with the second-highest number of novel coronavirus cases, the local Health Secretary said he would resign after about month in office.

“I have only one thing to say: I tried,” Fernando Ferry said in a video announcing his departure.

The turmoil among health officials in Rio mirrors that of the Federal Government, where two health ministers resigned in the span of a month. An active-duty military general with no medical background is now interim Health Minister.

The WHO is looking into a surge of more than 54,000 new coronavirus cases in Brazil in 24 hours, that was reported by the Health Ministry on Friday and is by far the most reported in the country in a single day, according to top WHO emergencies expert Mike Ryan.

“That generally means there are probably more cases out there than reported,” he said.

As the toll continues to rise, local governments across Brazil have been gradually lifting lockdown orders.

South Korea confirms second wave A notice on precautions against the coronavirus is displayed at a subway station in South Korea.(AP: Ahn Young-joon)

South Korean authorities say the capital Seoul is already experiencing a “second wave” of infections, driven by small but persistent outbreaks stemming from a holiday in May.

The country reported 17 new cases, raising the total caseload to 12,438, according to the Korea Centres for Disease Control and Prevention (KCDC).

“Our forecast turned out to be wrong. As long as people [are] having close contact with others, we believe that infections will continue,” she said.

Space to play or pause, M to mute, left and right arrows to seek, up and down arrows for volume. South Korean officials warn of second wave

South Korea has earned international praise for its approach to combatting coronavirus, with large-scale testing and contact tracing.

WHO epidemiologist and technical lead on the pandemic Maria Van Kerkhove said “many countries right now that have had success in suppressing transmission and bringing human-to-human transmission to a low level … are starting to see increasing cases,” naming South Korea as one of them.

She stopped short of describing it as a “second wave”.

“Any opportunity that the virus has to take hold, it will,” she said, urging countries to “put everything they can” into isolating such cases to prevent renewed community transmission.

After more than 100 days of lockdown, New York City residents have celebrated their progress in curbing the coronavirus pandemic by getting their first haircuts in months, shopping at long-closed stores, and dining at outdoor cafes.

Once the epicentre of the global outbreak, the city was the last region in New York state to move into Phase 2 of reopening with restaurants and bars offering outdoor service and many shops reopening.

Barber shops and hair salons welcomed customers for the first time since mid-March.

Playgrounds were also due to reopen on Monday in the most populous US city.

The pandemic has killed nearly 120,000 Americans and is flaring up in a dozen states that reported record increases in cases last week, while in New York City the virus accounted for 22,000 deaths.

The city estimates 150,000 to 300,000 additional workers will return to their jobs, two weeks after the reopening began with construction, curbside-pickup retail, wholesaling and manufacturing.

On Monday customers wearing face coverings lined up outside Clementine Bakery in the Brooklyn neighbourhood of Bedford-Stuyvesant and a few enjoyed the warm summer morning sipping iced coffee at scattered tables on the sidewalk.

“It feels like my life is starting to get back to normal a little bit. It feels really nice the fact that I can sit and have a coffee,” said Arden Katine, 34, a teacher who lives in the neighborhood.

Monday marks just the second of four reopening phases, but Mayor Bill de Blasio called it “the biggest step forward as we fight back from the coronavirus crisis.”

Small and medium-sized businesses are being hit hardest by the impact of COVID-19.

A report by the International Trade Centre says small to medium-sized businesses will feel the brunt of coronavirus restrictions.(AP: Nam Y. Huh)

About 20 per cent say they risk shutting down permanently within three months, a survey by the International Trade Centre (ITC) has shown.

“The lockdown has led to major revenue drops for most and the survival of many is at stake,” the 176-page report released by the Geneva-based ITC read.

In its global business impact survey of thousands of companies in 132 countries between April and June, nearly two thirds of micro and small firms said they were “strongly affected” by the impact of lockdowns.

About one in five small and medium firms said they risked shutting down permanently within three months.

The findings could have implications for global employment since small businesses are the biggest employers.

Read more about coronavirus:Saudi Arabia to limit Hajj pilgrimage to locals This year’s Hajj will not be cancelled, but only “very limited numbers” of people will be allowed to attend.(AP: Amr Nabil)

Saudi Arabia says it will bar arrivals from abroad attending the Hajj this year due to the coronavirus, allowing only a limited number of Saudi citizens and residents to make the pilgrimage, with social-distancing measures enforced.

The announcement means this will be the first year in modern times Muslims from around the world have not been allowed to make the annual pilgrimage to Mecca, which all Muslims aim to perform at least once in a lifetime.

“This decision is taken to ensure Hajj is performed in a safe manner from a public health perspective while observing all preventative measures and the necessary social-distancing protocols to protect human beings from the risks associated with this pandemic and in accordance with the teachings of Islam in preserving the lives of human beings,” the ministry that oversees pilgrimages said in a statement.

The number of coronavirus cases in Saudi Arabia has exceeded 160,000, with 1,307 deaths, following a rise in new infections over the past two weeks.

About 2.5 million pilgrims typically visit the holiest sites of Islam in Mecca and Medina for the week-long Hajj. Only “very limited numbers” will be allowed to participate in 2020, authorities said.

The kingdom halted international passenger flights in March and asked Muslims in March to put Hajj plans on hold until further notice.

Earlier this month, Malaysia and Indonesia both barred their citizens from travelling to Saudi Arabia for the pilgrimage, citing fears of the coronavirus.

Croatian authorities have banned visits to nursing homes and hospitals in the Croatian coastal town of Zadar, following an outbreak of the new coronavirus at an exhibition tennis tournament.

Authorities said on Monday that dozens more tests are underway in Zadar, while Croatia’s state HRT television reported that Prime Minister Andrej Plenkovic will also be tested after visiting the event.

Djokovic’s team said he has returned to Serbia and was tested there, while the event has been cancelled.

The players came under fire from Australian star Nick Kyrgios, who delivered them a serve for their actions.

“Boneheaded decision to go ahead with the ‘exhibition’ speedy recovery fellas, but that’s what happens when you disregard all protocols,” he wrote on Twitter.

Nightlife in and around the Portuguese capital of Lisbon goes back under curfew from Tuesday in areas with the most new coronavirus cases, after the easing of restrictions led to a surge in illegal partying.

Over the weekend, police broke up parties and raves along the shoreline that exceeded a limit of 20 people per gathering.

One beach party that spilled out of the parking lot of a restaurant near Lisbon had about 1,000 revellers.

Despite a relatively low coronavirus toll of 39,392 confirmed cases and 1,534 deaths, authorities are worried that several hundred new cases are being found every day throughout Lisbon.

But the Government maintains that the outbreaks are localised and traceable to particular workspaces and crowded neighbourhoods.

“The nucleus of the problem is centred in just 15 neighbourhoods — we need a stronger effort in these areas,” Prime Minister Antonio Costa said.

In these areas, the limit on gatherings will be halved to just 10 people, and commercial spaces with the exception of restaurants will close by 8:00pm.

Restaurants will no longer be allowed to serve drinks after the curfew, and drinking in public spaces outside of licensed esplanades will also be prohibited.

A Pakistan Cricket Board medical official says the upcoming tour of England during the coronavirus pandemic is a “big risk” but one that is necessary to help the country get through the crisis.

“During the pandemic it’s [the tour] a big risk,” the PCB’s director of medical and sports sciences Dr Sohail Saleem said on Monday.

“We haven’t experienced [playing during a pandemic], but for both teams it will be a first. The pandemic means risk, but consider them [players] as … providing people entertainment.”

Mr Saleem said he was encouraged by football resuming in Europe where the Bundesliga in Germany and the Premier League in England have staged games played in empty stadiums.

“There’s no crowd in football and there will be no spectators at cricket stadiums too,” he said.

“The anxiety level of people sitting at home is rising, but cricket can be seen as lowering these.”

The Pakistan team is scheduled to leave for England on Sunday.

The PCB is sending an extended squad of 29 players in case replacements are needed for anyone testing positive during the tour.

Don't Miss it Why doctors say UK is better prepared for a second wave of coronavirus | World news
Up Next Newsom: 36.5% of state’s total COVID-19 cases occurred in last 2 weeks