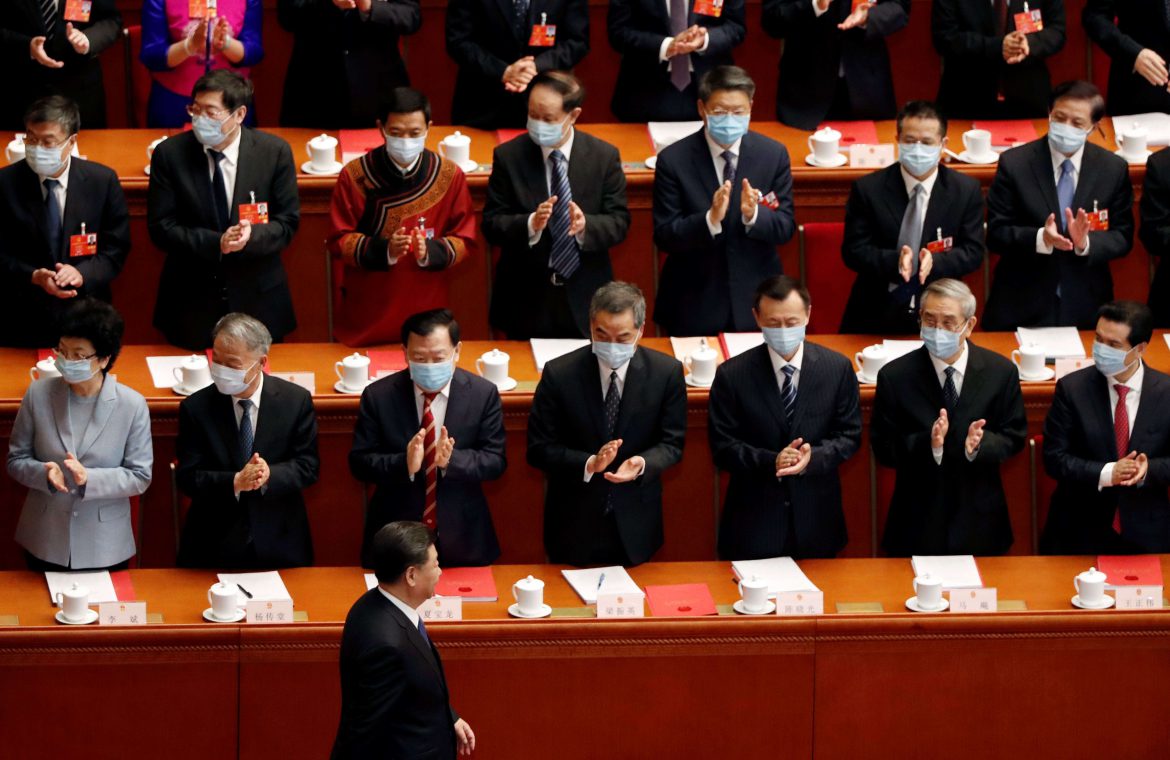 Chinese President Xi Jinping walks past officials wearing face masks following the coronavirus disease (COVID-19) outbreak as he arrives for the closing session of the National People’s Congress (NPC) at the Great Hall of the People in Beijing, China May 28, 2020.

China has been juggling a global pandemic along with geopolitical tensions this year, clouding the outlook for those wanting to invest in the world’s second largest economy.

The country is trying to get back on its feet after it essentially shut its economy to contain the coronavirus. The virus is also a key part of tensions between the U.S. and China, after Washington accused Beijing of hiding the full extent and origins of the outbreak.

Tensions between the two have spread across many fronts, including financial markets after the Senate passed a bill targeting Chinese companies listed in the U.S. The powerhouses have also clashed over China’s national security law for Hong Kong, which prompted President Donald Trump to announce that the U.S. will revoke the Asian financial hub’s special trading status.

Despite these developments, there are still areas of the market where investors can find opportunity. Here’s how investors should trade Chinese stocks amid these tensions, according to analysts.

Investment bank Morgan Stanley recommends being overweight on Chinese A-shares, or shares that are traded on mainland indexes. Valuations within those stocks have tended to dip the least in response to U.S.-China tensions, said the investment bank.

“The A-share market also has very limited foreign ownership representation,” said Morgan Stanley. That’s only about 4% of the market capitalization for A-share stocks, versus at least 35% for the MSCI China index, it said.

MSCI China has A-shares in the index, but also includes H-shares — which are traded on the Hong Kong exchange — as well as U.S.-listed Chinese companies.

It would require companies to certify they are not owned or controlled by a foreign government and subject them to audits by U.S. regulators for three consecutive years. Companies would be be banned from exchanges if they do not meet either requirement.

Morgan Stanley warned investors about companies with high foreign ownership but are not eligible for secondary listings in Hong Kong.

“They are facing greater uncertainty with regard to delisting as a result of the ongoing focus on … accounting/audit compliance,” it wrote in a report last week.

Hong Kong has been making it more attractive for companies listed elsewhere to have a secondary listing on its stock exchange. But there are certain criteria: for instance, companies in tech and innovation listed for at least two years on the New York Stock Exchange or Nasdaq qualify.

Analysts have predicted that the risk of being delisted in the U.S. will drive many Chinese companies to flock to Hong Kong.

That will be positive for shares of Hong Kong Exchanges and Clearing, Citi Research analysts said in a report last week. That could lead to a 10% increase in earnings, the analysts said in its note reiterating a “buy” rating.

China’s economy was among the earliest to reopen, lifting most restrictions and allowing residents to resume activities outside their homes. That normalization of social activities “remains well on track,” said Morgan Stanley.

The bank raised its rating for consumer durables stocks to “equal weight,” an indication that it expects those stocks to perform in line with its peers. The investment bank explained it expects less downward pressure on earnings for industries related to consumption and services.

Don't Miss it Is Victoria to blame for Australia’s COVID-19 case surge?
Up Next Trump feuds with WHO and China +++ Brazil now has third highest number of cases | Coronavirus Update