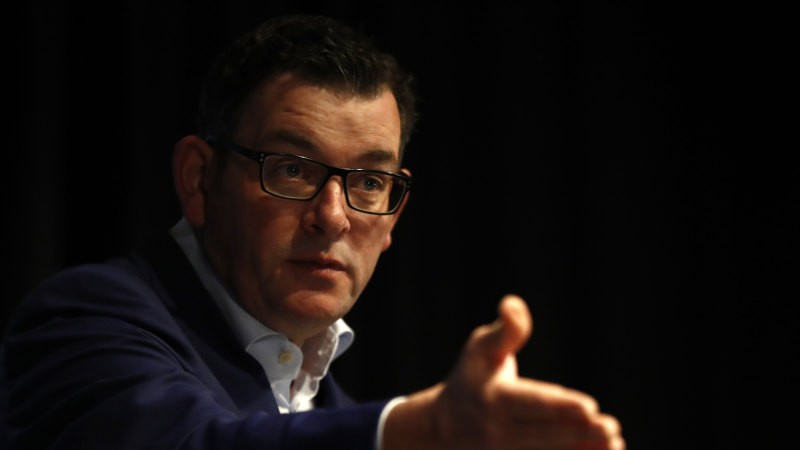 The first sign that something may have been awry came on Saturday afternoon. It was 1pm and the government’s daily coronavirus update, usually released in the morning, was yet to be delivered.

At the same time, the city’s indoor malls were heaving with crowds that looked like they were shopping for Christmas.

Many Melburnians, unconcerned about the upcoming announcement, heartily embraced their new freedoms, meeting friends at busy cafes and flocking to playgrounds.

The difference from just a few weeks ago was striking.

“If you walked into Chadstone these days, you would not believe there is a global pandemic,” said Matt McDonald, an organiser for the Shop, Distributive and Allied Employees Association.

“The whole mood has shifted… People are laughing and seem to be having a good time. A couple of months ago, it was Armageddon. Everyone had their head down, keeping away from each other. You stepped into someone’s personal space, they would stare at you like a pariah. Now everyone just couldn’t care less.”

Later that Saturday, following crisis talks, Premier Daniel Andrews would announce 25 new coronavirus cases. It was the highest total in more than two months, and of most concern, the majority were acquired in Victoria, putting the state on what has been described as a precipice of a second wave of infection.

Victorians are now starting to demand answers about what has gone wrong, when the state had reported no cases just two weeks before. Some have turned their attention to the state government’s handling of the crisis, including how the infectious disease could have been allowed to escape from hotel quarantine, a system meant to protect the community, not put it in danger.

But a number of officials and medical experts say it is also time for the public to look in the mirror, among consistent reports that Victorians, once held up as models of social-distancing compliance, have begun to dramatically relax their behaviour, either sick of restrictions or believing the danger is behind them.

Queues for coronavirus testing at Chadstone this week.Credit:Joe Armao

The head of the Australian Medical Association in Victoria, Associate Professor Julian Rait, said that he had noticed a shift in community attitudes after thousands of masked protesters took to the streets following the Black Lives Matter demonstrations, a little more than two weeks ago – even though Victoria’s Chief Health Officer Brett Sutton has been careful to rule out the demonstration as a site of major infection.

“I’ve had many of my colleagues in public health say to me in the last few weeks that gee, people aren’t really observing social distancing any more. They are mingling in great numbers in cafes, very close to each other, and have forgotten what we were doing just a month ago,” Professor Rait said.

“I’m not trying to blame anybody. We are fighting against this really natural behaviour that we have to be social creatures, so it’s very hard to counter that.

“This virus is a real devilish virus. If you give this thing an inch, it will just exploit it and go wild.”

Two experts who spoke to The Age said Victoria could have been a victim of some bad luck around the timing and location of the outbreaks, occurring just as social distancing rules were easing after months of strict restrictions.

“This is about all of us, everyone, following the simplest of rules”: Premier Daniel Andrews.Credit:Getty Images

“We have these extended households in every city,” said Professor Catherine Bennett, epidemiology chair at Deakin University.

“It could have happened in Sydney two weeks ago … you only needed one person to get infected and take it into another nursing home or an extended family that keeps visiting over multiple households, and it’s live.

“In a sense, it could have happened anywhere… but because this has happened late and people are started to relax when restrictions eased, it makes us more vulnerable.”

Family clusters are reportedly responsible for about half of the latest coronavirus cases in Victoria in June, and these clusters have been linked to a GP who worked at multiple clinics, and security guards looking after returned foreign travellers at quarantine hotels.

But he said chance could have also played a role in the new cases, if those who became infected were among the 20 per cent most likely to spread the virus.

These people are sometimes dubbed “super-spreaders”.

The infectious diseases physician said another key challenge was the location of outbreaks within communities in outer suburbs of Melbourne, where people were more likely to live in larger households and English was not always their first language.

“So they may have not have understood the significance of coronavirus or known how to get tested for that matter,” Professor Cheng said.

A shocking revelation to come from the Premier’s press conference on Saturday was that people who had tested positive for coronavirus had continued to see family and go to work, knowing they had the disease.

It was followed by reports from retail workers that large numbers of people were going to get COVID-19 tests at the weekend, before getting out of their cars heading out to do some shopping.

The Premier was also keen on Tuesday to highlight a broader problem with behaviour across the community, including many families breaching rules limiting gatherings to five people within homes.

“This is about all of us, everyone, following the simplest of rules,” Mr Andrews said.

“Cough etiquette. Not going anywhere other than to get tested, if you are unwell. Keeping your distance. Not shaking hands. Not greeting people with hugs and kisses.”

Asked why Victoria was performing worse than other states in suppressing the disease, Mr Andrews said the most likely cause was low-levels of coronavirus that had remained undetected, despite a testing blitz.

He said the actions of people today would decide whether Victoria would be grappling with a second wave in the weeks to come.

“If do the wrong thing now, in three-weeks’ time it is well and truly away from you and there’s no pulling it back,” Mr Andrews said.

“We’re all in this together, and we’ve all got to make a contribution to beating this thing.

“No one gets a pass, no one gets to just pretend this is over, because it isn’t. Not by a long way.”

Aisha Dow reports on health for The Age and is a former city reporter.

Don't Miss it Victoria announces Australia’s first coronavirus death in a month as toll rises to 103 | World news
Up Next Investing in Chinese stocks amid coronavirus and tensions with the U.S.