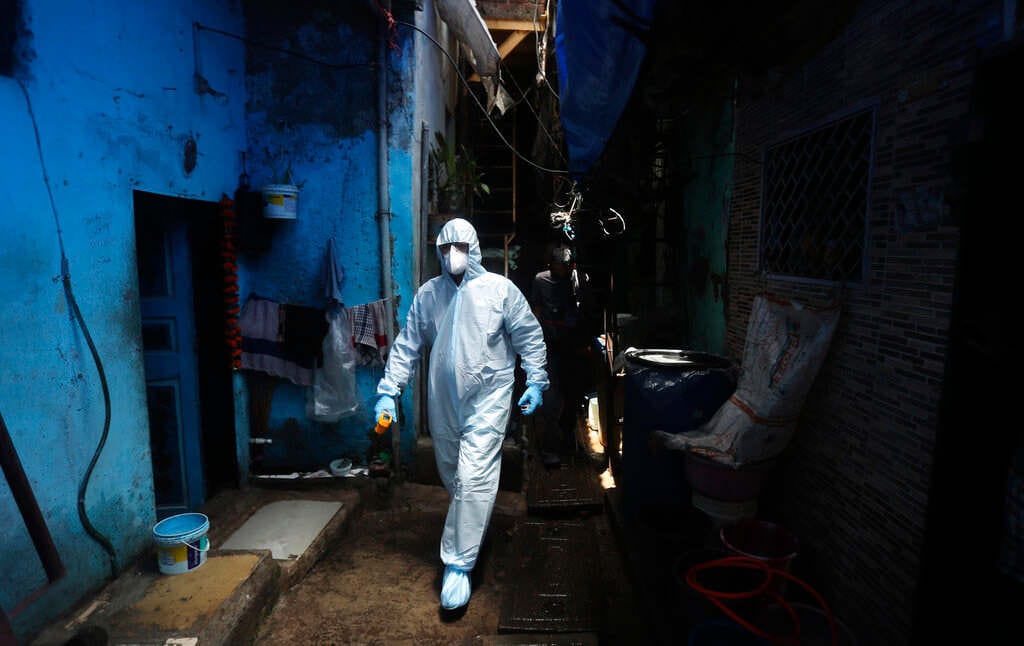 Coronavirus LATEST Updates: According to reports, The Indian Institute of Technology (IIT) in Mumbai has become the first major educational institution in the country to scrap all face-to-face lectures for the rest of the year due to the COVID19 pandemic. In a Facebook Post last night, IIT Bombay Director Professor Subhasis Chaudhuri said the decision was made “after a long deliberation”, reports NDTV.

WHO Director-General Tedros Adhanom yesterday said he expects the global COVID-19 case tally to reach one crore next week. Meanwhile, amid spiralling COVID-19 cases in West Bengal, Chief Minister Mamata Banerjee on Wednesday announced the extension of the lockdown till 31 July with the continuance of the existing relaxations.

India on Wednesday recorded its highest single-day spike of 15,968 new COVID-19 cases and 465 fatalities, taking the nationwide tally to 4,56,183 and the toll from the novel coronavirus to 14,476, the Union health ministry said.

Given the rise in number of cases, West Bengal chief minister Mamata Banerjee ordered lockdown in the state to be extended till 31 July with relaxations continuing outside containment zones.

Meanwhile, the Chandigarh administration said that it was mulling a stricter lockdown on weekends if there was a drastic rise in cases while Tamil Nadu re-introduced curbs on inter-district travel for six days.

According to news agency PTI, India registered over 14,000 cases for the fifth day in a row with 2,65,648 infections (58 percent of India’s current tally) been reported from 1 June till 24 June, with Maharashtra, Delhi, Tamil Nadu, Gujarat and Uttar Pradesh remaining the top five contributors.

The number of active cases stands at 1,83,022, while 2,58,684 people have recovered and one patient has migrated, according to the figures updated by the ministry at 8 am on Wednesday.

“Thus, around 56.71 percent patients have recovered so far,” an official said. The total number of confirmed cases include foreigners.

According to the Indian Council of Medical Research (ICMR), a cumulative total of 73,52,911 samples have been tested up to 23 June with 2,15,195 samples being tested on Tuesday.

Of the 465 new deaths reported till Wednesday morning, 248 were in Maharashtra, 68 in Delhi, 39 in Tamil Nadu, 26 in Gujarat, 19 in Uttar Pradesh, 11 in West Bengal, nine each in Rajasthan and Haryana, eight each in Karnataka and Andhra Pradesh, four each in Punjab and Madhya Pradesh, three in Telangana, two each in Jammu and Kashmir, Odisha and Uttarakhand.  Kerala, Bihar and Puducherry have reported one COVID-19 fatality each.

“Our figures are being reconciled with the Indian Council of Medical Research,” the ministry said, adding 8,141 cases are being reassigned to states.

After an all-party meeting, West Bengal chief minister Mamata Banerjee said that lockdown in the state had been extended till 31 July. There will be complete lockdown in only the containment zones, while elsewhere the relaxations allowed earlier will continue.

Banerjee said all educational institutions will remain shut till 31 July. Government offices will function in a “segregated manner” with 70 percent attendance on any given day. Metro and suburban train services will remain suspended.

Shopping malls, restaurants and other similar establishments had resumed services in Bengal on 8 June after a gap of over two months, with the state government allowing relaxations as part of ‘Unlock-1’, the first phase of a calibrated exit from the coronavirus lockdown across the
country.

Places of worship and private offices were also allowed to open with reduced attendance.

The state registered 445 fresh infections and 11 deaths on Wednesday, taking the total number of COVID-19 cases to 15,173 and fatalities to 591.

In Tamil Nadu, which reported 2,865 new cases and 33 deaths, chief minister K Palaniswami said that the system of travelling without an e-pass in a zone comprising of many districts had been temporarily cancelled as officials said it made contact-tracing more difficult. People can now only travel within a district without a pass and inter-district bus services too have been withdrawn for six days.

The chief minister in a statement also said that rice ration card holders in Madurai will get the second round of Rs 1,000 cash assistance in view of the week-long complete lockdown enforced there from Wednesday to check rising cases.

Meanwhile, the Chandigarh administration said it was mulling imposing stricter restrictions on the weekends, like those imposed in Punjab. If there is a drastic rise in the number of cases or if the residents continue to violate social distancing norms, Chandigarh could opt for weekend closure of markets or curfew on weekends as has been done in Punjab and other states, PTI quoted an official release as saying.

Chandigarh has been witnessing a rise in the number of coronavirus cases. With six fatalities due to the infection, the city has reported 420 COVID cases so far.

However, in Mumbai, where the case count rose to 69,625 with 1,144 new cases, civic officials said that shops in municipal markets will now be allowed to operate on odd-even basis.

In a circular issued on Wednesday, the Brihanmumbai Municipal Corporation (BMC) said shopkeepers will have to take adequate precautions to prevent the spread of the viral infection and only two people would be allowed to work inside each shop. However, eateries and hotels in these markets will continue to remain closed.

In order to speed up testing, the BMC said it will purchase one lakh antigen testing kits as part of its ‘Mission Universal Testing’.

Delhi overtook Mumbai as the worst-hit city on Wednesday after COVID-19 cases soared by 3,788 to touch 70,390.

The National Capital reported 64 fatalities in the last 24 hours, the Delhi health department bulletin said, pushing the toll to 2,301.

The updated figures came even as the state government announced a new COVID-19 response plan, which includes screening every house in containment zones till 30 June and in the National Capital by 6 July, a News18 report said. Additionally, a serological survey will be conducted with 2o,ooo tests across all districts and age groups, reported PTI.

Contact tracing will be stepped up by the use of Aarogya Setu app coupled with an IT-driven tool, under the new plan.

The state government also roped in Army Medical Corps (AMC) to manage healthcare at the Railways’ COVID-19 care centre at the Shakur Basti station where the first two patients were put up in isolation coaches.

In the meantime, the Indo-Tibetan Border Police(ITBP) took over a 10,000-bed capacity centre in Delhi for coronavirus patients, officials said.

A team of officials from the border guarding force visited the Radha Soami Beas facility and held discussions with the Delhi government and other stakeholders who will be partners in running the centre, an ITBP officer said

Many states including Maharashtra, Kerala and Rajasthan reported an increase in cases.

As many as 3,890 new COVID-19 cases were registered in Maharashtra on Wednesday, taking the count of patients to 1,42,900, a health department bulletin said. The state also reported 208 fatalities, taking the toll to 6,739.

As many as 572 new coronavirus positive cases and 25 deaths were reported in Gujarat, taking the overall case count to 29,001 including toll to 1,736 deaths, reported ANI, quoting the state health department.

Rajasthan registered 10 deaths and 382 new patients on Wednesday, reported ANI, quoting the state health department. The total number of  cases in the state climbed to 16,009 and the toll rose to 375.

Day after announcing the 1,000th COVID-19 testing laboratory in the country, the Indian Council of Medical Research (ICMR) Wednesday said that “access to testing still remains a huge challenge in a large country like India”.

“There is a definite need to increase the outreach of testing by introducing rapid point of care diagnostic tests,” the ICMR noted in its advisory issued late on Tuesday.

Expanding the testing criterion for coronavirus, the ICMR said it should be made widely available to all symptomatic individuals across the country.

“Since test, track and treat’ is the only way to prevent the spread of the infection and save lives, it’s imperative that testing should be made widely available to all symptomatic individuals in every part of the country and contact tracing mechanisms for containment of infection are further strengthened,” it said in an advisory on ‘Newer Additional Strategies for COVID-19 Testing’ .

The apex health research body has also advised authorities to enable all government and private hospitals, offices and public sector units to perform antibody-based COVID-19 testing for surveillance to help allay fears and anxiety of healthcare workers and office employees.

Besides, the ICMR also recommended deployment of rapid antigen detection tests for COVID-19 in combination with RT-PCR tests in all containment zones, all central and state government medical colleges and government hospitals, all private hospitals approved by the National Accreditation Board for Hospitals and Healthcare (NABH), all NABL-accredited and ICMR approved private labs, for COVID-19 testing.

“ICMR advises all state governments, public and private institutions concerned to take required steps to scale up testing for COVID-19 by deploying combination of various tests as advised,” the advisory added.

Don't Miss it The Virus: The latest on the world's fight against the coronavirus | ABC News
Up Next Coronavirus live news: cases worldwide growing by 1m per week with surge in the United States and Latin America | World news