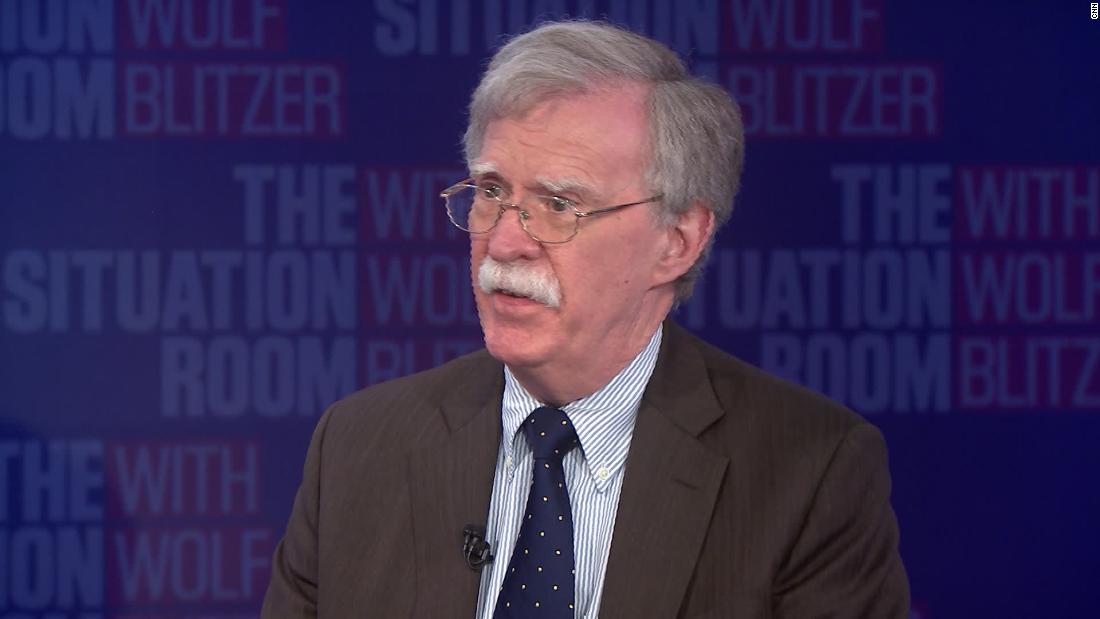 “I think there is an empty chair in the Oval Office, because the President did not want to hear bad news about Xi Jinping, his friend. He did not want to hear bad news about the cover-up of the virus in China, or its potential effect on the China trade deal that he wants so much. And he didn’t want to hear about the potential impact of a pandemic on the American economy and its effect on his reelection. Turning a blind eye to all these early signs I think hampered the country’s ability to deal with this, and continues to do so,” Bolton told CNN’s Wolf Blitzer on “The Situation Room.”

Asked if he had confidence in Trump’s handling of the pandemic, Bolton responded: “I do not.”

“I am afraid that the erratic nature of the policies as they’ve evolved since January when the experts really began to sense that this problem might be out there has characterized our response throughout. And I’m worried that it continues to be the pattern that the President follows. It’s not part of a comprehensive strategy. I think in a country the size of the United States, state and local authorities should have a big role, but at the federal level, the response has not been consistent,” he said.

Bolton’s interview with CNN follows the release of his book, titled “The Room Where it Happened.” The book has been subject to a months-long legal battle between him and the Trump administration, which in a last ditch attempt last week asked a judge for emergency help to stop the book’s publication.

The White House had argued that Bolton has breached non-disclosure agreements and risks national security by exposing classified information.

A federal judge on Saturday blocked the Trump administration’s attempt to prevent the publication of the book — but left open the possibility that Bolton could face criminal charges or be forced to hand over profits related to the book.

Bolton acknowledged that he may not get millions of dollars in profits from his book, depending on what the judge rules.

“I am prepared to accept that,” he said.

When asked if he was prepared to go to jail, Bolton said he does not see any reason for that to happen.

Bolton asserted again Wednesday that his testimony during impeachment proceedings would not have mattered because Democrats in the House immediately determined that the probe would focus “only on the Ukraine situation.”

“By determining right from the get-go that they were going to focus only on the Ukraine situation, and they were gonna ram it through as fast as they could, so it didn’t affect the Democratic presidential nomination process, drove House Republicans who might have been open to a broader consideration, a less partisan consideration, they drove those Republicans into their partisan corner, and it had the same effect in the Senate,” he said.

“Nonsense. I was a principal drafter of the articles of impeachment and I can tell you that broader obstruction issues were under consideration until the last minute,” he told CNN, shortly after Bolton’s comments.

“Indeed, you can see that from the Judiciary hearing in December where I and others questioned experts about, as Bolton would put it, ‘obstruction as a way of life.’ Look at the transcript and the exhibits for that hearing, and the press coverage which noted as much. Bolton is desperately rewriting history to palliate his own painful conscience. He knows he could have made a difference; instead he decided to make a buck,” Eisen added.

Bolton has consistently justified his absence during the impeachment inquiry by claiming that House Democrats are at fault.

House Democrats wanted Bolton to testify last year, but he refused to do so, threatening a legal battle if he was subpoenaed. Bolton offered to testify during the Senate impeachment trial, but Republicans voted to reject hearing from any witnesses.

Bolton wrote in his book that the Democrats’ conducted a hurried, partisan investigation, and accused them of committing “impeachment malpractice” by only focusing on Trump’s involvement with Ukraine.

Democrats have criticized Bolton for caring more about his book sales than Trump’s misconduct, while Republicans continue to question Bolton’s credibility and accused him of having an ax to grind.

Trump not a racist

Bolton also told CNN that he does not see Trump as being racist.

He added he was perplexed about Trump’s recent efforts to double down on racist rhetoric. “I do not know what he is doing quite honestly,” Bolton said of the racist rhetoric from Trump.

Bolton also told Blitzer that he had a resignation letter ready to go for some time before finally using it.

“I think at least for some of us we almost joked about it … I had a two sentence letter of resignation written for quite some time before I actually pulled it out of the drawer and made it effective,” he said.

“I knew that going in. I knew what people said about the President. I believed I could make it work. I did my best to try. And the history, I’ve written in the book,” Bolton said.

Don't Miss it Do I need to get my family tested for coronavirus every time one of us has a runny nose this winter?
Up Next North Korea's youtube propaganda web series explained | DW News