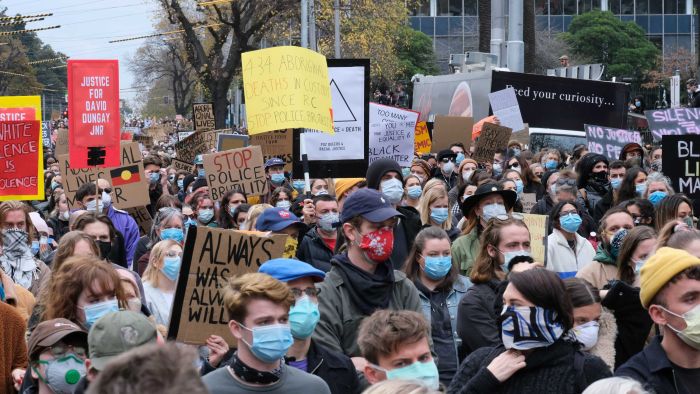 You can read the latest edition below, and subscribe to have the next newsletter delivered straight to your inbox.

As Victoria grapples with a spike in COVID-19 cases, some commentators have suggested that the increase was triggered by Melbourne’s recent Black Lives Matter rally, which was attended by 10,000 people. We’ve taken a look at what health officials are saying about the three protesters who have since tested positive for the virus.

We’ve also revisited misinformation surrounding the origins of the novel coronavirus, as suggestions continue to spread that it was created in a lab.

In this edition:Virus spike linked to families, not Black Lives Matter rally

With COVID-19 case numbers on the rise in Victoria, some people have drawn an unsubstantiated link between the spike and the large Black Lives Matter protest held in Melbourne on June 6.

Some of Senator Henderson’s Liberal Party colleagues, including Matthew Guy, Georgie Crozier and Tim Smith, as well as Evan Mulholland of the Institute of Public Affairs, tweeted similar criticisms, while headlines have also declared that the “upsurge in COVID cases [is] linked to Melbourne Black Lives Matter protests”.

But these assertions contradict the guidance of officials of the Victorian Department of Health and Human Services, who continue to report that the current burst of cases does not stem from the rally. They have said that while one protester “may have been infectious at the rally”, two others who have since tested positive for COVID-19 were not infectious at the rally, nor is there evidence they contracted the virus at the rally.

Rather, Victoria’s Chief Health Officer, Brett Sutton, has linked the increase in cases to family gatherings, citing family spread as the “main cause” of 120 cases in the week to June 22.

“People have not followed our advice around physical distancing, hygiene and limiting the number of people you invite into your home,” he said in a statement.

Australia’s Deputy Chief Medical Officer, Nick Coatsworth, also dismissed claims the spike could be linked to the protests, telling reporters that “there is no evidence that there has been chains of community transmission that we are aware of through the Black Lives Matter protests”.

According to official Australian Government advice, “most people who are infected will develop symptoms within 14 days of infection”. It has been 20 days since the Black Lives Matter protest in Melbourne.

Black Lives Matter and COVID-19 converge in the US

In the US, where the coronavirus pandemic has hit hard and momentum continues to build for the Black Lives Matter movement, the convergence of the two events has inevitably led to the spread of misinformation, complete with a conspiracy theory involving Microsoft founder Bill Gates.

Fact checkers at Reuters have found misleading a claim that Melinda Gates, wife of Bill and co-founder of the couple’s philanthropic foundation, said that “black people must be vaccinated first” for COVID-19.

The claim, shared on Facebook, was made as protesters took to the streets in the US as part of the Black Lives Matter movement.

Rather, Ms Gates told TIME magazine that after healthcare workers, black people and other people of colour should have priority access to a vaccine in the US as they were being disproportionately affected by the virus.

Meanwhile, a claim that George Floyd’s murder was filmed before the coronavirus crisis, as no-one in the video is wearing a face mask, has been rated “pants on fire” by PolitiFact.

They found that bystanders seen in the video were indeed wearing masks, despite it being filmed one day before Minneapolis started requiring people to wear the protective coverings in indoor public spaces.

Coronavirus update: Follow all the latest news in our daily wrap.Still no evidence the novel coronavirus was created in a lab

Claims that the novel coronavirus was created in and released from a lab in Wuhan, China, continue to circulate, despite scientific consensus that the virus more likely originated in nature.

In one “exclusive article” published by Canadian Christian website LifeSiteNews, a headline — “Virus researchers uncover new evidence implying COVID-19 was created in a lab” —  misrepresents a yet-to-be peer-reviewed Australian study, according to the researchers.

While the research did conclude that the inadvertent release of COVID-19 from a lab was a possibility, it did not imply it was the most likely option and nor did it suggest that other possibilities were unlikely as suggested by the report.

Flinders University’s Nikolai Petrovsky, one of the authors of the study, told RMIT ABC Fact Check: “We can only speculate as to what this finding means in terms of origin of the virus.”

The LifeSiteNews report’s claim that researchers “recognise that other possibilities exist, but regard them as improbable”, was denied by Professor Petrovsky. Rather, he told Fact Check, the study “just emphasised that the possibility of a lab leak cannot be ruled out based on current evidence” and that it did not say other options were unlikely.

Meanwhile, fact checkers at Full Fact have said despite some claims, peer-reviewed research from Norway had not found the virus to have been artificially engineered.

The claims had reportedly appeared in an earlier, non-peer-reviewed version of the study, and were aired in the Norwegian press by one of the study’s authors.

However, the final version of the paper “doesn’t actually make any claims about whether the virus was natural or man-made in its current form”, according to the fact checkers.

“The scientific community widely agrees that the virus was not artificially engineered,” they added.

The Washington Post Fact Checker has found that despite assurances from officials, black and African residents of the Chinese city of Guangzhou have been the subject of a targeted crackdown over fears they are spreading the coronavirus.

In one incident caught on film, a McDonald’s store in the city displayed a sign informing patrons that “black people are not allowed to enter the restaurant”.

Meanwhile, a pizza shop owner wrote on LinkedIn that local authorities had told him to refuse dine-in service to foreigners, “especially black people”.

According to the Washington Post, officials claimed such events were the result of a “miscommunication”.

But the fact checkers found that as reports emerged in early April of Nigerian men testing positive for the virus in Guangzhou, anti-African sentiment started spreading on Chinese social media, with a reported uptick in posts using the n-word and referring to “illegals”.

A landlord spoken to by a researcher at First Draft, who collaborated with the Post, said he had received instructions to report any black people in his building to authorities, while an African-Canadian man in the city said he had been confronted by officials in his home and refused entry to the subway.

According to the Post, Chinese state media said reports of discrimination were “fake news” and a police officer “assured the public that all foreigners in Guangzhou were treated equally to Chinese nationals”.

However, the bottom line was that “Africans and the larger black community in Guangzhou faced evictions, discrimination and the restriction of their movements on the basis of the colour of their skin over coronavirus fears”.

Things that don‘t cure and/or prevent COVID-19 #32 | Taking a hot bath: “Taking a hot bath will not prevent you from catching COVID-19. Your normal body temperature remains around 36.5°C to 37°C, regardless of the temperature of your bath or shower. Actually, taking a hot bath with extremely hot water can be harmful, as it can burn you.” — World Health OrganisationFrom Washington, D.C.

Despite the US having both the highest number of COVID-19 cases and deaths, President Donald Trump has continued to argue that the coronavirus outbreak is worse elsewhere.

Speaking at his much-hyped campaign rally in Tulsa, Oklahoma, this week, Mr Trump suggested that widespread testing had led to higher numbers of COVID-19 cases being recorded.

“We will show more — more cases, when other countries have far more cases than we do; they just don’t talk about it.”

But PolitiFact found that while the US has conducted a large volume of testing, this simply reflected the extent of the outbreak in the country.

“A way to understand this: the number of tests necessary to identify a positive case,” the fact checkers said.

“If it’s easier to find a positive case, that suggests the virus has spread further and more testing is necessary to track the spread of COVID-19.”

According to a fact check compiled by the New York Times, the US on average returns one positive case every 21 tests, whereas Italy, another country hit hard by the virus, is recording one positive case in every 188 tests.

As news of a deadly knife attack in Reading, England, spread on social media this week, so too did misinformation concerning the circumstances of the attack and the identity of the alleged attacker.

Some Facebook accounts were quick to link the attack, which left three men dead and has been labelled a terrorist incident by police, to the ongoing Black Lives Matter protests.

In one Facebook comment, seen by fact checkers at Reuters, a user wrote: “When are they going to learn this BLM is just another extreme organised event protesting because they don’t get what they want so they kill and riot and fight and stab and injure horses!!!”

However, as the fact checkers pointed out, while the park where the stabbings took place had been earlier used as a gathering place for protesters, “it is false to say the events happened simultaneously, and it is misleading to make the link between them”.

According to Reuters, Facebook was also used to spread false information regarding the identity of the man who carried out the attack, 25-year-old Khairi Saadallah.

The picture in this post is of a man arrested in the US for a failed bomb plot.(Supplied)

A photo allegedly of the Reading knife attacker is instead a mugshot of a man arrested in the US for a failed Los Angeles Airport bomb plot in 1999, while the name accompanying the photo, Ahmed Hannachi, belongs to a man who killed two women at a French train station in 2017.

Got a fact that needs checking? Tweet us @ABCFactCheck or send us an email at factcheck@rmit.edu.au