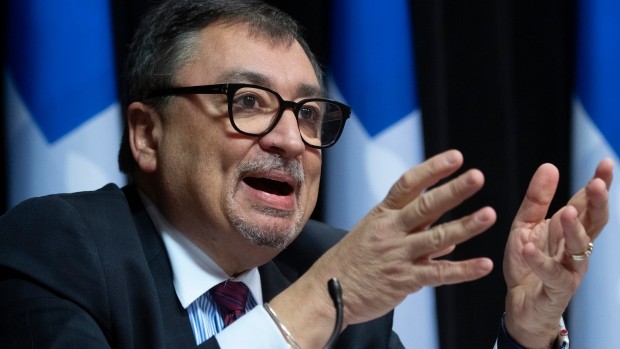 Horacio Arruda, Quebec’s director of public health, confirmed that change of plans during a news conference in the Eastern Townships on Friday afternoon.

Arruda said he didn’t want to dig in his heels on the issue, and had reflected on the matter after being criticized for rolling back the daily updates on new COVID-19 cases, hospitalizations and deaths to only once a week.

“People reacted, and they reacted more than I expected, and so no problem, we’ll go back to reporting them daily,” he said. “Given the situation, I don’t have a problem taking a step back.”

Arruda had said epidemiologists often prefer to publish weekly data as it better reflects trends, and also that he’d felt some people were tired or concerned about hearing the daily updates on new cases and deaths.

“Myself and my team, we discussed that as the rates are getting lower, we would publish once a week, but the reaction of the population, of the media, thinking that we want to hide information, I discussed with authorities and we all agree with (providing daily updates again),” he said. “I was thinking people didn’t want to hear about COVID-19 anymore, but that was not the case.”

The decision to move to weekly updates was met with strong reaction, including from Prime Minister Justin Trudeau who said he hoped Quebec, where the pandemic is still active, would continue to be transparent and open with its residents.

Quebec’s new health minister, Christian Dube, also confirmed in a tweet Friday that the decision had been reversed.

“We’re listening,” he wrote. “Since the start of the pandemic, our government has always been transparent. We will continue to be.”

Arruda likened it to prescribing medication.

Arruda was in the Eastern Townships on the first stop of a tour of Quebec’s regions to thank local health care workers for their efforts.

“It was important to me to go meet people who have been working hard in the past few months,” he said, adding that he spent time discussing with local public health officials specific strengths and weaknesses as the province prepares for a possible second wave of the virus.

The latest person to die was the first COVID-19 death in the region in months, and was an elderly people who had been hospitalized for close to two months.

There are currently no hospitalizations in the region and about 10 people are still under isolation orders as they recover from the illness.

Poirier said his team had been in contact with schools, daycares and businesses and that reopening has gone smoothly thus far.

Arruda and Poirier reiterated that the virus remains present in the province, and that physical distancing, hand hygiene and mask wearing continue to be recommended.