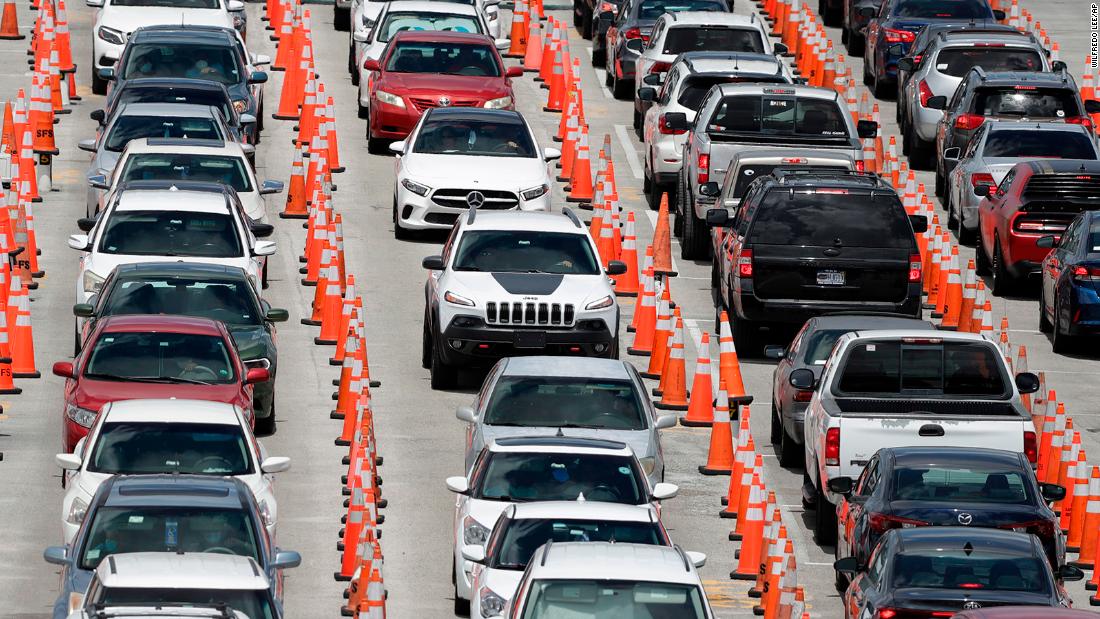 Florida, Georgia, Idaho, Tennessee and Utah all reported record daily cases, according to their state’s health departments. And for Florida, which has been eyed as the possible next epicenter, that number reached 8,938 new cases in just one day.

Florida Gov. Ron DeSantis told reporters Friday that “nothing has changed in the last week” and the surge was the result of a “test dump.”

But the governor of Texas, the nation’s second most populous state, “paused” his state’s phased reopening plan and ordered further restrictions on businesses including bars.

And at least nine other states have announced they are not moving ahead to the next phase: Arizona, Arkansas, Delaware, Idaho, Louisiana, Maine, Nevada, New Mexico and North Carolina.

Metropolitan areas across the US seeing exponential growth in cases means the nation will likely see a “dramatic increase” in the virus’ trajectory, Dr. Peter Hotez, a professor and dean of tropical medicine at Houston’s Baylor College of Medicine told CNN’s Jim Scuitto.

“At least in the metro areas we’ve got people wearing masks now, the bars are closed and we’ve got some advocacy coming out of the county judge and the mayor,” he said of Texas. “I don’t know how much this will really slow this incredibly aggressive rise. It’s like trying to stop a train coming down the tracks.”

The rise in cases for more than half of the country comes as people venture outside to enjoy summer activities and relaxed restrictions after a spring spent indoors to curb the virus’ spread.

Dr. Anthony Fauci, the nation’s top infectious disease expert, urged Americans to go back to the basics to prevent spreading or becoming infected with the virus.

“For goodness sakes: avoid crowds, wear masks. Those are the fundamentals that — when you look at the television clips, when you see pictures in the newspapers — people are not doing that. That’s a recipe for disaster,” Fauci said during an interview with CNBC’s Meg Tirrell.

To that end, many institutions are taking steps to disperse large groups.

A federal judge ruled Friday that the US government must release migrant children held in government family detention centers by mid-July. They must be released into the care of their parent or, if that is not an available option, to “available suitable sponsors or other available COVID-free non-congregate settings” with the consent of their parents or guardians.

In Texas, the Pride Houston march and parade agreed to hold a virtual rally instead of an in-person event, the organization wrote in a statement on Facebook Friday.

“Pride Houston understands that we do not live in a bubble and we are also in the middle of another public health crisis, the Covid-19 pandemic,” the organization wrote.

And following outbreaks after large beach gatherings, Miami-Dade County Mayor Carlos Gimenez announced Friday that he will sign an emergency order Saturday to close all beaches in the county for the Fourth of July weekend.

The order will also ban any gatherings, including parades, of more than 50 people throughout the county during that time. Fireworks displays will need to be viewed from homes or parked vehicles, Gimenez said in a statement.

Reopening bars has been a challenge for Florida and Texas as they try to protect against the virus.

“If I could go back and redo anything, it probably would’ve been to slow down the opening of bars. Now seeing in the aftermath of how quickly the coronavirus spread in the bar setting — and, ya know, a bar setting in reality just doesn’t work with a pandemic,” Texas Gov. Greg Abbott told CNN affiliate KVIA.

The Texas Alcohol Beverage Commission temporarily suspended the alcohol permits of 12 bars in Texas Monday after they were found to be in violation of the state’s protocols to slow the spread. Videos and photos posted by the commission on Twitter show crowded bars over the weekend with seemingly no social distancing.

In Florida, the Department of Business & Professional Regulation suspended alcohol consumption at bars statewide Friday due to non-compliance, the state’s governor said Friday.

90% or more of the country is susceptible More than 2.4 million cases have been reported and at least 125,039 people have died of the virus in the US so far. But the actual number of people who have been infected is likely 10 times as high.

Antibody tests, which examine a person’s blood for signs the immune system responded to an infection, show more than 20 million people have been infected — most without knowing it, said Dr. Robert Redfield, director of the Centers for Disease Control and Prevention.

But even with the number that high, only between 5% and 8% of Americans have been infected with the coronavirus, with the numbers varying by region. That means 90% or more have not been infected and are susceptible to the virus, highlighting the need to act aggressively to combat rising infection rates, Redfield said.

Federal health officials expanded the list of who’s potentially most at risk of severe complications from Covid-19.

So are those with conditions such as sickle cell disease, poorly controlled HIV infection, bone marrow transplants or an organ transplant.

The agency also has removed the specific age threshold, saying it’s not just those over age 65 who are at increased risk for severe illness.

Don't Miss it Which states and territories have mandatory coronavirus testing of people in hotel quarantine?
Up Next Philippines hit by Typhoon Vongfong | DW News