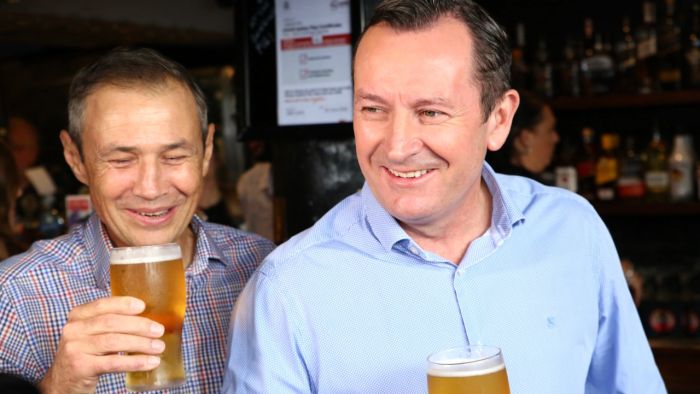 Queues formed outside venues ahead of the 11.59pm lifting of the limit on crowd numbers, which meant nightspots across the state could reopen their doors after months of being shut.

The changes are part of the State Government’s phase four roadmap, which included the removal of seated service requirements at pubs and restaurants, allowing patrons to drink a beer standing up at a bar.

WA Premier Mark McGowan said he had spoken to the Police Commissioner following the first night of eased restrictions and there had been “no reports of any trouble”.

“People were well-behaved and there was good excitement and people doing the right thing across the state, so that’s good news,” Mr McGowan said.

There was a queue at the Casino ahead of its 6.00am reopening, albeit with temporary limits that ensure every second gaming machine is turned off to ensure physical distancing.

Mr McGowan said about 4,200 staff had returned to work at the casino, after the business was reduced to a skeleton workforce during the first three phases of the pandemic lockdown.

“That means we’ll have that very, very large employer back operating relatively normally and on July 18 it’ll be completely back to normal.”

Inmates in WA jails were also allowed visits for the first time in months.

Mr McGowan said in that time, there was a dramatic drop in the quantity of drugs detected inside prisons.

“Clearly there’s a big lesson here — the drugs were coming in via family members and we’re going to do more things stringently to prevent the drugs coming in,” he said.

While praising West Australians for “doing the right thing”, Mr McGowan said the state was “leading the nation”.

“We have avoided, at this point in time, a catastrophe and that’s due to the work of people across the state,” he said.

“We’ve got more activity and more jobs and more businesses back than any other state in Australia.

“About three months ago, we were planning for mass death and mass illness across our state, so we’re in a very fortunate position compared to what was expected.

“You’ve seen what happened all over the world, where countries have had huge infection rates and mass deaths, so Australia has been very, very lucky.

“We have led the world.”

Under phase four of the eased restrictions, businesses are no longer required to obtain the contact details of customers, gyms may operate unstaffed and live music events are permitted, except for large-scale, multi-stage festivals.

Large sporting and entertainment venues, such as Perth Stadium and the Perth Arena, are permitted to operate at 50 per cent capacity.

Despite the easing, the government is still warning people to maintain physical distancing — even urging nightclub patrons not to kiss and hold hands.

The two-square-metre rule — which requires venues to provide at least two square metres of floor space per person — remains in place.

People queuing outside a nightclub in the Perth CBD as phase four coronavirus restrictions came into effect.(ABC News: Supplied)

The government intends phase four restrictions will apply until Saturday, July 18, before moving to phase five, in which the two-square-metre rule will be abolished, along with all gathering restrictions.

No date on hard border

Removal of WA’s hard border with the eastern states had been touted for phase six, but the Health Department’s website noted this had been put on hold “due to the rapidly evolving situation in Victoria”.

Mr McGowan refused to put a date on when the border may be reopened, saying that would be “inappropriate.”

“We have to wait until there are very low rates of infection in the east and we get health advice that says it’s appropriate to open the hard border,” he said.

“At this point in time, that isn’t there.”

How will WA’s border closures work?

WA has closed its borders to the east for the first time in history. Here’s how you might be affected.

Mr McGowan noted there continued to be a lack of consensus on the issue of borders between state governments.

“Clearly there is a difference of opinion between some states and the Commonwealth, and between states, but you know we’re pretty resolute,” he said.

“We’ve got the most open, vibrant, active economy — combined with hard borders — which is meaning we’re getting more people back to work, more businesses operating and we’re protecting our citizens.

Four of the cases are active and are in hotel quarantine.

“We anticipate that at some point in the future, particularly as you see greater movement of people, that there will be outbreaks in Western Australia,” Mr Cook said.

“We are planning for that in order to respond to it — we know what to do, but everyone [should] continue to be vigilant.”

Don't Miss it Coronavirus vaccine: The story of the race to solve the COVID conundrum
Up Next Measures to protect Trump from coronavirus scale up even as he seeks to move on