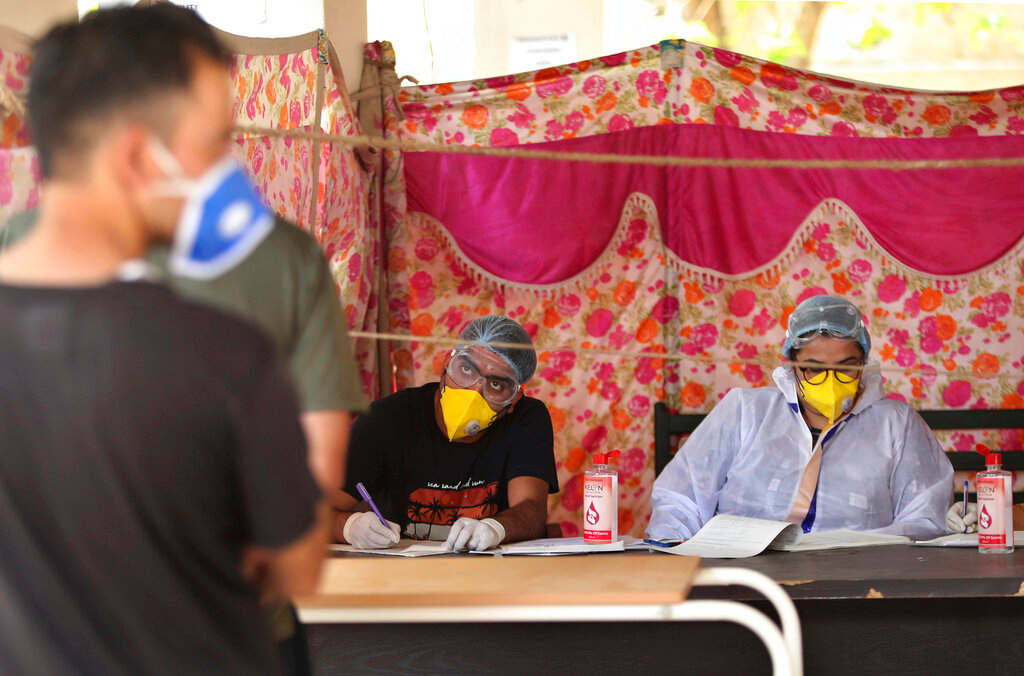 Coronavirus Updates: Maharashtra reported the biggest single-day spike of 5,493 COVID-19 cases so far on Sunday, which took the tally of patients in the state to 1,64,626.

Coronavirus Updates: Maharashtra reported the biggest single-day spike of 5,493 COVID-19 cases so far on Sunday, which took the tally of patients in the state to 1,64,626.

Manipur Chief Minister N Biren Singh announced that the government has decided to extend lockdown for another 15 days – from  1 July to 15 July.

Uddhav Thackeray via online video conferencing on Sunday announced that the lockdown in Maharashtra is still 30 June. ‘What is going to happen after 30 June? We have to keep the word ‘lockdown’ aside. But after June 30, will lockdown be lifted? No, strictly speaking, lockdown won’t be lifted but things won’t remain the same,’ said Thackeray.

Amit Shah also said that there is no community transmission in Delhi. When asked about the difference of opinion between the Centre and Delhi government on announcing whether community transmission had begun in the country, the Union minister said, ‘I have talked to three senior-most officials – Dr Paul (from NITI Aayog), IMCR chief Dr Bhargava and Dr Guleria (AIIMS New Delhi Director). This situation has not come to Delhi.’

Narendra Modi on Sunday during his ‘Mann Ki Baat’ address said that the nation needs to be more careful during ‘Unlock’ than the previous phases lockdown. “I appeal to the people to not be careless,” he says. “Please wear masks and observe physical distancing guidelines.”

A complete lockdown would be enforced in Guwahati for the next 14 days beginning Sunday, said the Guwahati Commissioner of Police. Meanwhile, the number of coronavirus cases in Assam crossed the 7,000-mark on Saturday after 246 more people, including 31 police personnel, tested positive, while the death toll due to the disease rose to 10.

India’s coronavirus case count soared to 5,08,953 on Saturday with the highest single-day surge of 18,552 cases, while the death toll climbed to 15,685 with 384 fatalities, according to Union health ministry data.

On the backdrop of an increase in infections, the Karnataka government announced a range of measures including limiting working days of government offices to five days and revising night curfew timings.

According to news agency PTI, it took 110 days for coronavirus infection in the country to reach one lakh while it took just 39 days more to go past the five lakh-mark on 27 June. Saturday was the fourth consecutive day when coronavirus infection increased by more than 15,000 while there has been a surge of 3,18,418 infections from 1 till 27 June.

Of the 384 fatalities reported till Saturday 8 am, 175 were in Maharashtra, 63 in Delhi, 46 in Tamil Nadu, 19 in Uttar Pradesh, 18 in Gujarat, 13 in Haryana, 12 in Andhra Pradesh, 10 each in West Bengal and Karnataka. of the remaining, seven deaths were reported in Telangana, four in Madhya Pradesh, two in Punjab, one each in Jammu and Kashmir, Chhattisgarh, Bihar, Rajasthan and Uttarakhand.

According to the health ministry, more than 70 percent deaths took place due to comorbidities.

“Our figures are being reconciled with the Indian Council of Medical Research (ICMR),” the ministry said, adding that 8,023 cases are being reassigned to states.

According to the morning update issued by the health ministry, the number of active cases stands at 1,97,387 while 2,95,880 people have recovered and one patient has migrated.

Thus the recovery rate stands at 58.13, the health ministry said.

Noting that India’s recovery rate is rising, Prime Minister Narendra Modi said India is much better placed than many other nations due to lockdown and many initiatives taken by the government as well as a people-driven fight. However, he cautioned people against letting their guard down.

“In fact, we have to be even more careful now. Wearing masks, following social distancing, avoiding crowded places remain important,” he said addressing a public event in Pathanamthitta in Kerala via video conference.

In another statement released in the evening, the health ministry said that a Group of Ministers (GoM) on COVID-19 was informed that eight states — Maharashtra, Tamil Nadu, Delhi, Telangana, Gujarat, Uttar Pradesh, Andhra Pradesh and West Bengal — contributed to 85.5 percent of the active COVID-19 caseload and 87 percent of the total deaths due to the disease in India.

The health ministry said it also informed the GOM during its 17th meeting that the COVID-related health infrastructure has been strengthened with the availability of 1,039 dedicated COVID-19 Hospitals with 1,76,275 isolation beds, 22,940 ICU beds and 77,268 oxygen-supported beds, the ministry said.

ICMR Director General Balram Bhargav told the GoM that India now has 1,026 diagnostic labs dedicated to COVID-19. This includes 741 in the government sector and 285 private labs.

According to the ICMR, till 26 June, a cumulative total of 79,96,707 samples have been tested with 2,20,479 samples being tested on Friday, the highest in a day since the contagion began to spread in India.

The GoM was also told that 15 central teams consisting of public health experts, epidemiologists and a senior joint secretary-level officer have been deployed to provide support to the states. Another central team is currently visiting Gujarat, Maharashtra and Telangana to boost the ongoing efforts for managing COVID-19, it said.

While Agarwal said efforts should be focused on reducing the mortality rate and suggested testing capacity be increased in the district, Pradip Vyas, principal secretary (health) in the Maharashtra government said the need of the hour was large-scale contact tracing, increasing the number of tests and setting up of more quarantine facilities.

Amid a rise in coronavirus infections, the Karnataka government announced a slew of decisions, including total lockdown on Sundays starting 5 July and revision in night curfew timings from 9 pm to 5am to 8 pm to 5 am with effect from 29 June.

The decisions were taken at a meeting chaired by Karnataka chief minister BS Yediyurappa with ministers and officials amid growing outcry by the Opposition to impose stringent lockdown measures to contain COVID-19 cases in the state.

“Lockdown would be imposed every Sunday, with effect from 5 July, 2020 until further orders. No activities shall be permitted on that day except essential services and supplies. All government offices shall remain closed on all Saturdays, along with second and fourth Saturdays with effect from 10 July,” said an official statement.

According to a bulletin released by the Karnataka health department, confirmed cases in the state surged to 11,923 as 918 more persons tested positive for the novel coronavirus while 11 succumbed to the diseases, taking the toll to 191. Four persons have so far died due to non-COVID-19 causes, the bulletin added.

New cases and fatalities were also reported in other states and UTs including Maharashtra, Gujarat and Delhi.

Coronavirus cases in Maharashtra rose to 1,59,133 with a record 5,318 new patients confirmed positive on Saturday. The toll due to the virus reached 7,273 with 167 fatalities coming to light on Saturday. Mumbai recorded 1,460 fresh COVID-19 cases and 41 deaths, taking the total number of infections in the metropolis to 73,747 and toll to 4,282, reported ANI quoting the Brihanmumbai Municipal Corporation.

Gujarat too reported its highest single-day spike with 615 patients testing positive for the virus, taking the overall caseload to 30,773, the state health department said.

With the death of 18 patients on Saturday, the number of fatalities has gone up to 1,790. But the number of the recovered cases climbed to 22,417 after discharge of 379 patients in the day and the state now has 6,566, it said.

Former Gujarat chief minister Shankersinh Vaghela too tested positive for the novel coronavirus, reported News18. He is displaying mild symptoms and is currently quarantined at home.

Delhi on Saturday registered 2,948 new coronavirus cases and 66 deaths, taking the total number of cases to 80,188 and toll to 2,558. On Saturday, a serological survey to undertake a comprehensive analysis of the spread of COVID-19 in the National Capital commenced in some parts of the city.

“The serological survey has started from Saturday and will cover 20,000 people. The survey is being conducted door to door and will reveal the extent of coronavirus spread in Delhi,” Chief Minister Arvind Kejriwal said in an online briefing.

In the meantime, West Bengal recorded 521 new cases and 13 deaths, taking the total number of cases in the state to 16,711 and death toll to 629, reported ANI quoting the state health department.

In another development, the health ministry allowed the use of steroid drug dexamethasone for the treatment of COVID-19 patients who are moderately to severely ill. In its revised ‘Clinical Management Protocols for COVID-19’, the ministry said that  dexamethasone can be used as an alternative choice to methylprednisolone for managing moderate to severe cases. The change has been made after considering the latest available evidence and expert consultation, it added.

According to the World Health Organisation (WHO), the corticosteroid dexamethasone was tested in hospitalised patients with COVID-19 in the United Kingdom’s national clinical trial ‘RECOVERY’ and was found to have benefits for critically-ill patients.

Globally, the viral infection has now affected as many as 96,52,307 while 4,91,115 people have died due to the disease, according to that WHO COVID-19 database.

Don't Miss it British pubs face financial ruin as coronavirus crisis rolls on | ABC News
Up Next Coronavirus: What’s happening around the world on Sunday