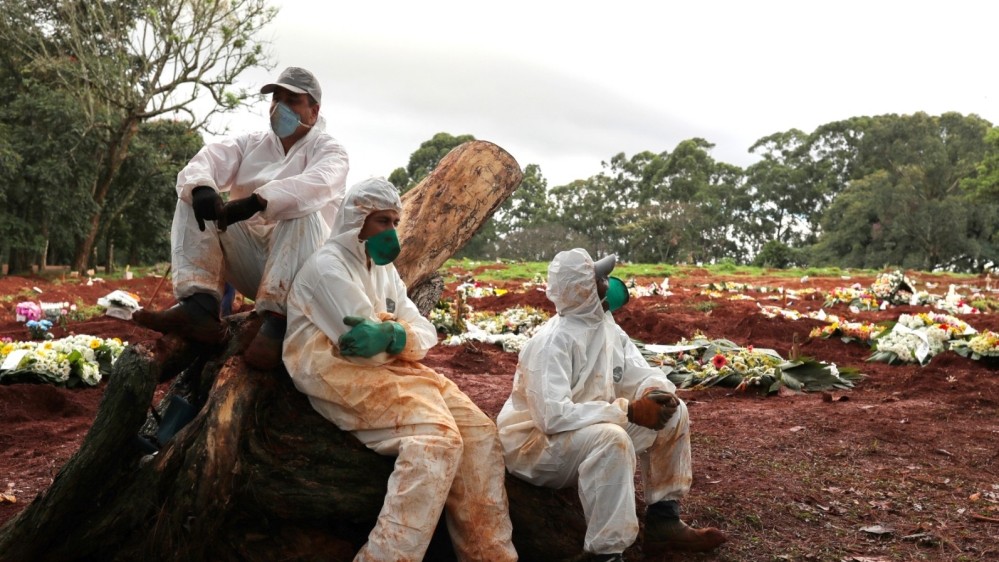 Global coronavirus cases exceeded 10 million on Sunday according to a Reuters tally, marking a major milestone in the spread of the respiratory disease that has so far killed almost half a million people in seven months. The figure is roughly double the number of severe influenza illnesses recorded annually, according to the WHO. More than 5 million of the patients have recovered.


Italy has registered the lowest day-to-day tally of COVID-19 deaths on since March 1, a week before the country went into nationwide lockdown. There were eight additional deaths reported, raising the nationwide fatalities to 34,716. There were 175 new cases, bringing the overall count to 240,136.


The US reported at least 2.5 million cases of the new coronavirus, an increase of more than 44,000 cases from its previous count, according to the Johns Hopkins University tally. The death toll has already reached more than 125,000.


Brazil recorded 38,693 new cases of the novel coronavirus in the past 24 hours and 1,109 additional deaths, the Health Ministry said. The nation has now registered 1,313,667 total confirmed cases of the virus and 57,070 deaths. Brazil is racing to produce 30.4 million doses of vaccine by January 2021.

Australia’s Victoria state will implement mandatory coronavirus tests for returning travellers after a sharp spike in infections over the past two weeks, the state’s premier said on Sunday, Reuters news agency reported.

The country’s second-most populous state had 49 new cases on Sunday, its highest in more than two months and the 12th consecutive day of double-digit rises. The rest of Australia has seen almost no infections.

Victoria’s officials said earlier this week that some 30 percent of returning travellers refused a COVID-19 test, and Andrews said it will be a mandatory procedure. Australia also requires all locals who return to quarantine in hotels for two weeks.

Despite the spike in Victoria, Australia’s 7,700 cases and 104 deaths remain well below that of many other nations.

The British government is considering imposing a lockdown in the city of Leicester after a surge of coronavirus cases there, the Sunday Times newspaper reported, citing senior government sources.

Health Secretary Matt Hancock is examining a legislation required for the shutdown after it was disclosed that Leicester, a city of around 350,000 people in the East Midlands, has had over 650 COVID-19 cases in the fortnight to June 16, the newspaper was quoted as saying by Reuters news agency.

Hancock is considering “all options”, including imposing a localised lockdown, according to the report.

03:18 GMT – Ireland to keep its 14-day quarantine on British travellers

Ireland will maintain a 14-day quarantine for travellers from the British mainland in July even as it plans to ease travel restrictions with some countries, Reuters news agency reported on Sunday quoting the Sunday Times publication.

The memo with the Irish cabinet committee said it was “highly unlikely” that Britain would be included in Ireland’s safe travel list, the report added.

Ireland plans to lift from July 9 a 14-day quarantine for people arriving from countries that have also suppressed the coronavirus, the Irish government said earlier.

The number of confirmed coronavirus cases in Germany increased by 256 to 193,499, Reuters news agency reported on Sunday quoting data from the Robert Koch Institute (RKI) for infectious diseases.

The reported death toll rose by three to 8,957.

02:48 GMT – US state of Hawaii to reopen campgrounds

The city of Honolulu has announced that campgrounds will reopen for the first time in three months with limited permits to ensure social distancing amid the coronavirus pandemic, AP news agency reported.

Honolulu city will issue permits for just over 100 campsites across Oahu.

The Bellows Beach campground northeast of Honolulu will remain closed through September 4 for turtle nesting. All the other campgrounds have reopened.

The new tally is higher than 51 cases reported on Saturday, hitting over 60 for the first time since June 20.

The government reported no additional deaths, with the total death toll remaining at 282 – a fatality rate of 2.22 percent. More than 11,300 patients have recovered.

Since June 11 when Beijing reported its first case in the current outbreak, 311 people in the city of more than 20 million have contracted the virus.

Mexico’s health ministry on Saturday reported 4,410 new confirmed coronavirus infections and 602 additional fatalities, bringing the total in the country to 212,802 cases and 26,381 deaths, according to Reuters news agency.

The Defense Ministry says in a statement issued on Saturday that Vulin has no symptoms of the virus and is feeling fine.

Vulin, known for his highly pro-Russian stance, was part of Serbia’s delegation led by President Aleksandar Vucic that attended a Victory Day parade this week in Moscow. Vucic met face to face with Russian President Vladimir Putin, but it was not clear whether Vulin did so as well.

Maja Gojkovic, the speaker of Serbia’s parliament, also tested positive, according to the state Tanjug news agency on Saturday.

The Brazilian government has announced an agreement with Oxford University and pharmaceutical company AstraZeneca to produce a promising coronavirus vaccine that is undergoing tests.

Brazilian Health Ministry authorities said in a news conference on Saturday that the country will pay $127m and receive material to produce 30.4 million doses in two batches in December and January, which would allow it to quickly start inoculation efforts if the vaccine is certified to be safe and effective.

The total deal is for 100 million vaccines for a country of about 210 million residents. It will be produced by local vaccine maker Fiocruz.

British researchers started testing the experimental shot in May aiming to immunise more than 10,000 people, including older people and children. The vaccine is one of about a dozen in the early stages of human testing.

Brazil, where coronavirus infections are still on the rise, counts more than one million confirmed cases and more than 55,900 fatalities.

Hello and welcome to Al Jazeera’s continuing coverage of the coronavirus pandemic. I’m Ted Regencia in Kuala Lumpur, Malaysia. For all the key developments from yesterday, June 27, go here.

Don't Miss it Coronavirus: How Delhi ‘wasted’ lockdown to become India’s biggest hotspot
Up Next Co-founder of Maryland group that protested for state to reopen tests positive for coronavirus