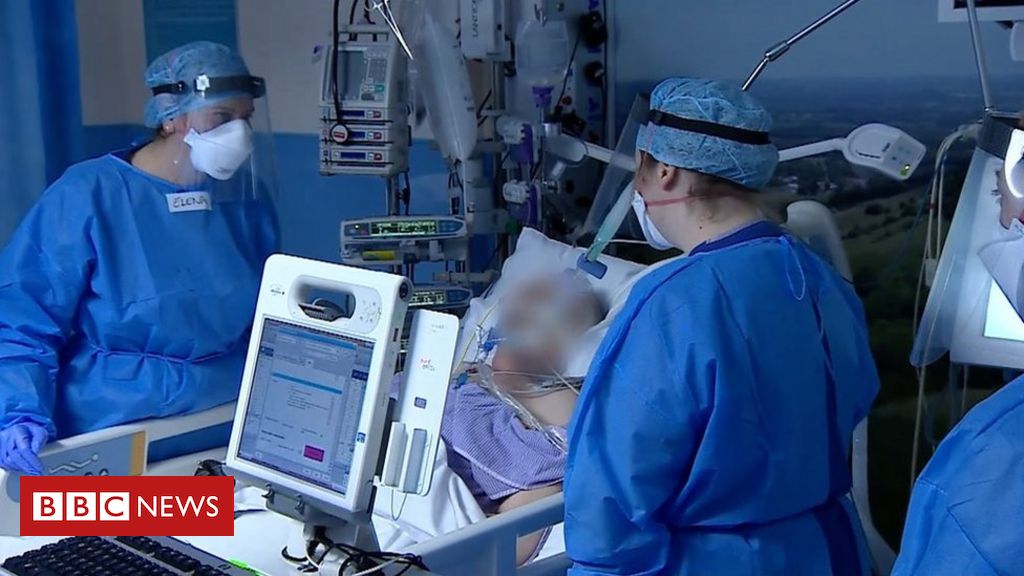 People who were seriously ill in hospital with coronavirus need to be urgently screened for post-traumatic stress disorder, leading doctors say.

The Covid Trauma Response Working Group, led by University College London and involving experts from across south east England, said those who had been in intensive care were most at risk.

The experts said regular check ups should last at least a year.

More than 100,000 people have been treated in hospital for the virus.

The experts say tens of thousands of these would have been seriously ill enough to be at risk of PTSD.

The working group highlighted research which showed 30% of patients who had suffered severe illnesses in infectious disease outbreaks in the past had gone on to develop PTSD, while depression and anxiety problems were also common.

Tracy is just one of many people who has been left with psychological scars from her coronavirus experience.

She was admitted to Whittington Hospital in north London in March and spent more than three weeks there – one of which was in intensive care.

“It was like being in hell. I saw people dying, people with the life being sucked from them. The staff all have masks on and all you saw was eyes – it was so lonely and frightening.”

Since being discharged in April the 59-year-old has been struggling to sleep because of the thought she will die and she has constantly suffered flashbacks.

She is now receiving counselling.

“It has been really difficult. Physically I have been so tired. I’m beginning to recover, but the mental side of it is very hard to deal with.

“I have a good support network of family and friends and I’m a positive person – and I am struggling. I think there will be plenty of people who are in a similar situation, if not worse.”

UCL psychiatrist Dr Michael Bloomfield, who is on the Covid working group, said those patients who have ended up in hospital will have faced a “very frightening and invasive” experience and coupled with the long-term complications they would be at risk of stress-related mental health difficulties.

He said the unique nature of the pandemic, which meant patients were isolated from their family while in hospital, could also make the problems worse.

“We need to make sure we support these patients. Services in place are very variable. Failure to do more could have long-term consequences.”

A spokesman for NHS England said it was clear the pandemic had “turned lives upside down”.

He said all Covid survivors who stayed in hospital will have a follow up appointment with either their GP or hospital team where their mental health would be assessed.

They were also able to refer themselves for psychological support, he added.

Don't Miss it Alex Azar: ‘Window is closing’ for US to get coronavirus under control
Up Next Melbourne doctor calls COVID-19 rise ‘worrying’