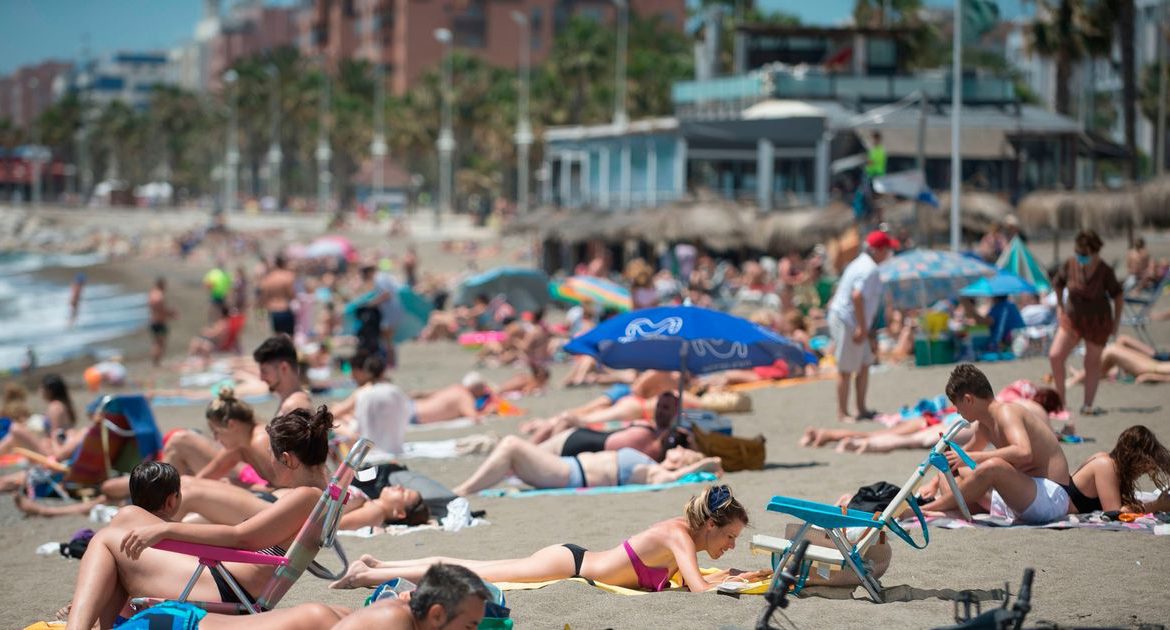 Spain’s Costa Del Sol has been hit with another coronavirus outbreak leaving 96 people infected with the deadly virus.

It comes just a week after the first British tourists began arriving in the country after some of its beaches were reopened following the coronavirus crisis.

A lorry driver has been hospitalised and two of his children have also tested positive for Covid-19 .

The family lived in Casabermeja, a popular expat and holiday town half-hour drive north of Malaga.

The number of positives linked to the new outbreak currently stands at six.

Two recent outbreaks in the south of Spain have thrown holiday plans into doubt
(Image: AFP via Getty Images)

More than 90 people have now tested positive for coronavirus at a Red Cross centre in Malaga, the scene of the province’s first new outbreak since the end of Spain’s state of emergency on June 21.

The new scares come just over a week after Spain started allowing its 47million tourists to travel freely around the country.

The number of holidaymakers arriving on budget airlines is still a trickle.

However, more are expected to jet to Spain for last-minute sunshine holidays once rules surrounding quarantine are clarified.

The plan – which allows Brits to go on holiday to safe European destinations without having to self-isolate upon return – is expected to come into force on July 6.

Speculation about Portugal’s inclusion on the list has already been questioned following concerning outbreaks in areas like the Algarve and Lisbon.

Spain’s secretary of state for tourism insisted on Friday before the new outbreak in La Axarquia the country was “ready” to cope with any new cases.

During a visit to the Costa del Sol, Isabel Oliver said: “We’re looking forward to the return of our tourists to Spain, so they can enjoy the experiences they have in the past.

“Maybe they’ll experience them a bit differently but it will be totally pleasurable for them.”

Referring to the problems caused by new Covid-19 outbreaks including the one at the Red Cross centre in Malaga, she added: “We knew this could happen and the reaction has been super quick to control the situation.

“We have a wonderful health system and in the face of these adversities and difficult situations, what I’m seeing is that Spain is prepared.”

The ‘patient zero’ in the new outbreak in La Axarquia has been identified locally as a middle-aged trucker living in Casabermeja.

The small town is a popular base for hikers and other outdoor sports enthusiasts.

The unnamed lorry driver has been hospitalised but his two children have begun to self-isolate at home after testing positive for the virus.

Local reports said the six La Axarquia positives were thought to be linked to an outbreak in the city of Granada.

New outbreaks have also been confirmed in the provinces of Cadiz, Huelva and Almeria.

More than 180 people have tested positive for Covid-19 in the Andalucia region’s new outbreaks.

Nationwide the number of new outbreaks currently stands at around 20, affecting 11 of Spain’s autonomous regions.

Catalonia is another of the regions which has reported most new outbreaks.

One affects around 40 fruit pickers who have been quarantined in a hotel in Lerida.

Spain, with 248,770 confirmed coronavirus cases and 28,343 deaths, is the eighth most affected country in the world.