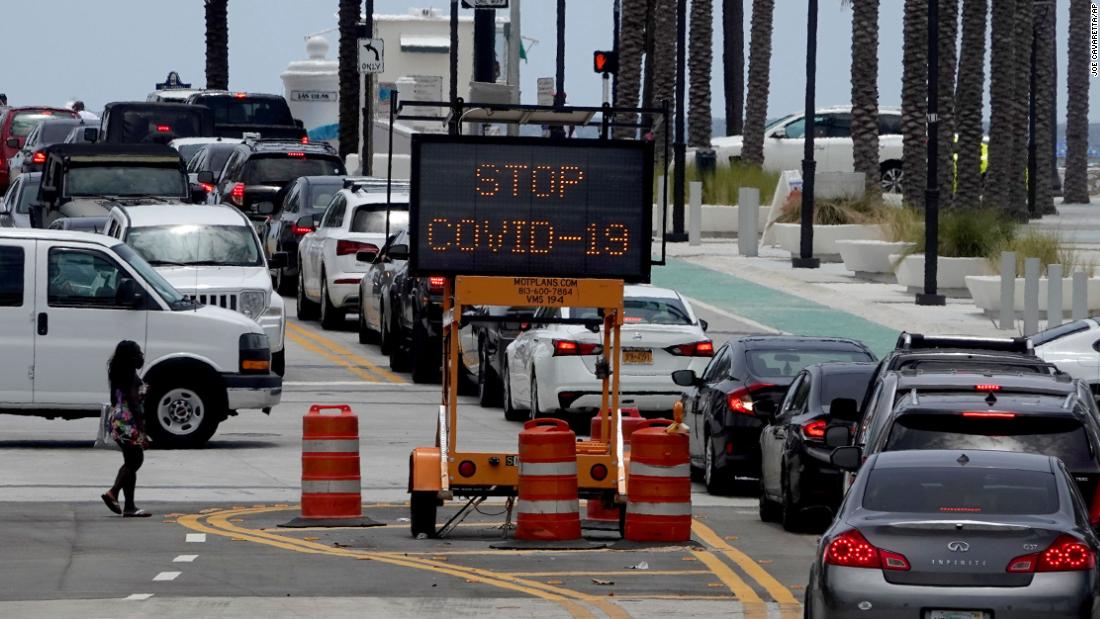 With July 4 approaching, officials are trying not to repeat scenes of Memorial Day, when thousands across the country flocked to beaches, bars and parties while experts cautioned the crowds could lead to spikes in cases down the road. At least 12 states have hit a pause on their reopening plans hoping to contain the spread.

In Florida, on-premise alcohol consumption was suspended in bars statewide.

The announcements come after a devastating week for the country, during which many states broke their records for new cases in a day and the US also recorded a record high of single-day cases with 40,173 reported Friday.

But those numbers may just be a glimpse into how widespread infections across the country are, as a survey from the US Centers for Disease Control and Prevention found the total numbers of infections could be up to 24 times higher than reported.

What happens next is unclear. Local and state leaders have vowed they’ll do whatever it takes to stay away from a second shutdown. But many have stopped short of taking the option off the table. And as more cases continue to report a rise in cases, Health and Human Services Secretary Alex Azar warned Sunday the window of time to get the pandemic under control is quickly closing.

Increase will ‘get worse for weeks’

Governors across the US have partially attributed their surges to more widespread testing — but former CDC director Dr. Tom Frieden warned Sunday even with more testing and better prepared hospitals, “this virus still has the upper hand.”

The increase in cases across the South is the result of reopening too fast, Frieden said on Fox News Sunday, and “is going to continue to get worse for weeks.”

And deaths will come too, he noted in a grim prediction that coronavirus fatalities will lag behind cases of infections by about a month.

Here’s how cases are trending now, according to data from Johns Hopkins University:

At least 12 states have by now paused or rolled back plans to reopen, hoping the move will slow further spread of the virus.

In the past week, officials and state leaders have made repeated pleas to Americans to stay away from crowded spaces, keep their distance and try to stay at home as much as possible.

Washington state Gov. Jay Inslee announced the counties that were preparing to enter into the fourth phase of reopening — with essentially no restrictions — will not do so just yet.

“We all want to get back to doing all the things we love in Washington during the summer, and fully open our economy, but we aren’t there yet,” the governor said in a statement. “This is an evolving situation and we will continue to make decisions based on the data.”

In Texas and Florida — both of which have raised alarm among experts with a rapid rise in cases — bars were ordered closed for a second time after officials suggested they were a driving force behind cases of coronavirus.

Expert: masks may partially protect you from getting infected

As communities now again grapple with how to move forward, another question: what about masks?

Mask requirements issued by some parts of the country have faced fiery backlash from residents who claim the mandates infringe on their rights. Some business owners and law enforcement units have refused to enforce mask regulations. And many governors, despite strongly encouraging masks through social media posts, have not made them a requirement in public spaces.

But White House coronavirus response coordinator Dr. Deborah Birx on Sunday pushed Americans to wear masks, saying that not only does evidence suggest masks “keep you from infected others,” but they “may also partially protect you from getting infected.”

The government has mentioned the possibility before but has not made it a point of emphasis. The CDC says, “cloth face coverings are meant to protect other people in case the wearer is unknowingly infected but does not have symptoms.”

Birx also encouraged young people to wear masks when they venture out, adding, “and if they’re interacting with their parents and grandparents, they should wear a mask then too because we know now how many of them are asymptomatic.”

CNN’s Artemis Moshtaghian and Wes Bruer contributed to this report.

Don't Miss it Gilead prices coronavirus drug at US$2,340 for rich countries
Up Next How contagious? Conspiracies, lies & the coronavirus ‘infodemic’ | DW debate special