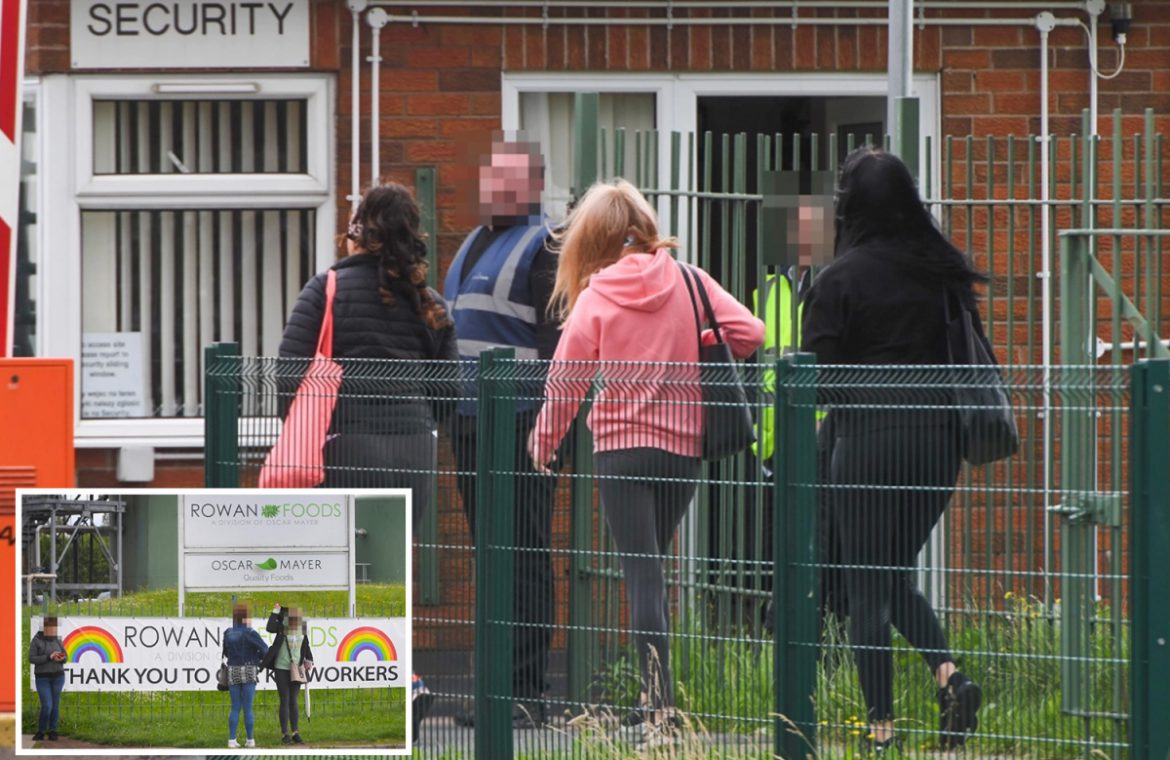 TERRIFIED staff at a coronavirus-hit food factory revealed they begged bosses to shut it down after 237 workers tested positive.

Public health officials are scrambling to trace 100 missing workers who may have the deadly virus after an outbreak at Rowan Foods in Wrexham, North Wales.

Staff arrived in cars together and were then told to keep their distance as they walked inCredit: �AndyKelvin / Kelvin Media

It comes as 216 staff at 2 Sisters meat factory in nearby Anglesey tested positive for Covid-19 and Leicester was put in stricter lockdown last night after a spike in cases.

Worried staff at the Wrexham plant say they are afraid of catching the bug while working near each other on packing lines in chilled rooms.

Management have so far refused workers’ demands to close down while health officials try to trace the missing employees.

One female worker, who did not want to give her name, said: “I am sick with worry.

“I’ve asked my bosses if we can shut down until the infections have come down, but no one is listening. They care more about the firm making money.

“I now know dozens of friends and colleagues who have had it and I guess it’s only a matter of time before I get it too.”

The worker, from Poland and in her 20s, said she is one of many young women in a similar situation.

“We worry like mad that we’ll fall sick too,” she added.

“Surely closing the factory down now is the sensible thing to do until the virus is back under control.”

She also said that although most staff wore gloves while working, few bothered with masks.

Public Health Wales today confirmed it had traced around 200 workers and discovered they were shielding or not working during the outbreak.

But a worker, also from Poland, claimed it will be “impossible” to trace the remaining 100 colleagues who may have the virus.

The man, who did not want to be identified, said most of the factory’s 1,000 workers are recruited from Eastern Europe on the minimum wage and many quit after a few months.

He said: “Most workers only last a few months but back home there is always another plane load waiting to take our places.”

It comes after Leicester has been forced back into more severe lockdown restrictions due to a spike in cases.

Health Secretary Matt Hancock said Leicester would be the only place in England not allowed to ease restrictions.

While the rest of country opens up on Saturday, the city’s pubs, restaurants and hairdressers will instead remain closed for two more weeks — until July 18 — at least.

Meanwhile, non-essential shops will have to shut again from today. Schools will close for most pupils from Thursday.

Mr Hancock warned that Leicester could even go into full lockdown again if outbreaks continue, with travel restricted in and out of the area.

Meanwhile, cases have also risen in 10 more towns and counties in the past two weeks – leaving officials afraid of more local lockdowns.

Staff huddled close together on breaks outside the factoryCredit: �AndyKelvin / Kelvin Media

Workers claim they have begged for the plant to be closed down over safety fearsCredit: �AndyKelvin / Kelvin Media

Staff told the Sun Online they were afraid of catching the deadly bugCredit: �AndyKelvin / Kelvin Media

And in Wrexham, during lunch and cigarette breaks outdoors in the grounds of the huge factory in an industrial estate two miles outside the town yesterday, staff huddled just inches apart beneath a cycle shelter.

Social distancing was not evident and none seen by Sun Online journalists wore gloves, masks or other PPE.

Many appeared to be lift-sharing as they arrived at work.

Up to four workers emerged from vehicles pulling up outside the plant and were told by security staff to keep two metres apart as they made their way inside.

In the first week of April, staff at the plant walked out in protest amid concerns over Covid-19 working conditions.

Police were called more than once to the plant after workers walked out.

There are no plans to close the site, following “a detailed two-day inspection by the Health and Safety Executive” last Friday, a spokesperson for Rowan Foods said.

The spokesperson added protective equipment is on site for anyone who wants to use them and the factory has safe workable conditions.

They said everyone on site was tested last week, adding: “We are aware that Public Health Wales has previously said that it is trying to trace 300 missing employees.

“We are extremely puzzled by this as we provided the Public Health Wales testing unit with a list of nearly 300 colleagues who were not on site and would not be for some time, for reasons such as shielding, maternity leave, long term sick and isolation.”

Boris Johnson hints at tax rises to pay for coronavirus