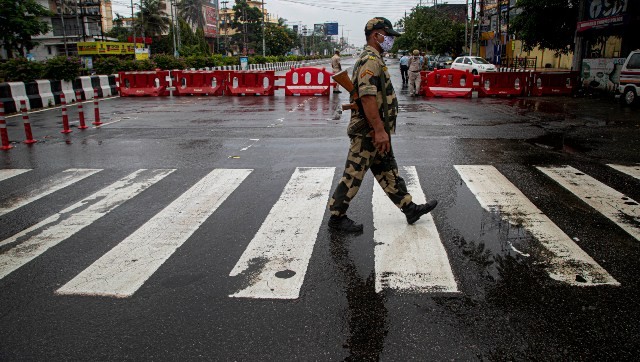 Coronavirus LIVE Updates: Section-144 has been imposed in Mumbai by Commissioner of Police Pranaya Ashok, prohibiting any presence or movement of one or more persons in public places or gathering of any sort anywhere, including religious places subject to certain conditions, in view of COVID-19, reports ANI.

Coronavirus LATEST Updates: Section-144 has been imposed in Mumbai by Commissioner of Police Pranaya Ashok, prohibiting any presence or movement of one or more persons in public places or gathering of any sort anywhere, including religious places subject to certain conditions, in view of COVID-19, reports ANI.

Mumbai’s Lalbaugcha Raja Sarvajanik Ganeshotsav Mandal has decided not to hold any of its famous Ganesh Chaturthi festivities this year in view of the COVID-19 pandemic. The organisers have decided to set-up a blood and plasma donation camp instead. India reports 507 deaths and 18,653 new COVID-19 cases in the last 24 hours.

The Railways will expand its suburban services in Mumbai from today and run 350 trains each in the Central and Western Railway Zones, Union Minister Piyush Goyal said. The trains will, however, only carry essential services personnel identified by the Maharashtra government. Mumbai recorded 903 new cases, pushing the total number of cases to rise to 77,197 on Tuesday.

As Unlock-2 begins from Wednesday, India’s COVID-19 tally climbed to 5,66,840 with nearly 66 percent cases reported in June alone. The nationwide toll rose to 16,893 with 418 new fatalities being reported in 24 hours, according to the Union Health Ministry data.

On Tuesday, Tamil Nadu again surpassed Delhi to regain the second spot among the list of worst-hit states by the COVID-19 pandemic.

In his televised address Tuesday, the prime minister also said it is a cause of worry that people are not adhering as strictly to rules and precautions during the ‘unlock’ phase as they did during the lockdown.

Stating the cost to the exchequer in extending the PMGKAY scheme, the prime minister said that over Rs 90,000 crore will be spent on the scheme, and if the last three months’ expenditure on account of the free ration scheme is added, then the total budget will be about Rs 1.5 lakh crore.

The scheme was rolled out for three months from April soon after the nationwide lockdown was announced to combat the COVID-19 pandemic.

Noting that July marks the beginning of the festive season when people’s needs as well as expenditure increase, Modi said that the government has decided to extend the scheme till November end.

The prime minister also said in his 16-minute address that the Central Government is working on the “one nation, one ration card” initiative which, he added, will benefit people living outside their home for employment and other needs the most.

The prime minister said that each member of a family covered under the scheme will get five kilogrammes of wheat or rice, and every family will get one kilogramme whole gram per month as well.

Modi, however, lamented that there is an increasing “negligence” in personal and social behaviour during the easing of restrictions and urged people to be more vigilant.

“We have also seen that since ‘Unlock-1’, there is increasing negligence in personal and social behaviour. Earlier, we were very careful with respect to wearing of masks, social distancing and washing of hands for 20 seconds. But today, when we need to be more careful, increasing negligence is a cause of worry,” he said and urged the people to follow all necessary precautions.

He also emphasised on strict enforcement of rules, especially in containment zones.

“Those not following the rules will need to be stopped and cautioned,” he said, stressing “be it a village pradhan or the prime minister, no one is above the law in India”.

Maharashtra remained the highest contributor to the single day rise in cases, registering over 5,200 coronavirus infections, according to the Union Health Ministry.

Recording nearly 4,000 cases in the last 24 hours, Tamil Nadu has again surpassed Delhi to regain the second spot among the list of worst-hit states by the pandemic.

Delhi saw an increase of 2,084 cases in the past 24 hours. In June, the national capital added over 64,000 fresh cases to its tally, while over 47,357 patients recovered, were discharged or migrated.

Arunachal Pradesh reported 187 cases, Mizoram has 148 cases, Andaman and Nicobar Islands has 90, Sikkim has registered 88 infections so far, while Meghalaya has recorded 47 cases.

The Delhi government has set the ball rolling to establish the first-of-its-kind “plasma bank” for treatment of COVID-19 at a facility in the National Capital and its modalities are being worked out, sources told PTI.

The bank is being set up at the Delhi government-run Institute of Liver and Biliary Sciences (ILBS) and doctors or hospitals will have to approach it if a plasma is required for treatment of a COVID-19 patient.

Addressing an online media briefing on Monday, Chief Minister Arvind Kejriwal had said the bank will be operational in the next two days.

The move comes as convalescent plasma therapy has shown “encouraging” results in city hospitals, he had said.

Sources said the facility where the plasma will be drawn from one person to donate to a COVID-19 patient, is being set up on the serving floor of the ILBS.

The plasma itself can be stored in the blood bank facility in a separate pack, a source said.

According to experts, plasma needs cryogenic storage at minus 80 degrees Celsius or less.

Bharat Biotech gets nod to conduct trials for vaccine

The Drug Controller General of India (DCGI) has granted permission to Bharat Biotech International Limited (BBIL) to conduct Phase I and II Human clinical trials to develop an indigenous vaccine for COVID-19 —  in the name COVAXIN.

For this, Indian Council of Medical Research (ICMR) and BBIL had partnered to develop a fully indigenous vaccine for COVID-19 using the virus strain isolated at ICMR’s National Institute of Virology (NIV), Pune.

“The Central Drug Standard Control Organisation (CDSCO) — the office of DCGI has granted permission to initiate Phase I and II Human clinical trials after the company submitted results generated from preclinical studies, demonstrating safety and immune response. Human clinical trials are scheduled to start across India in July 2020,” stated the spokesperson of Bharat Biotech.

“The strain was successfully transferred from NIV to Bharat Biotech International Ltd. (BBIL). Work on vaccine development has been initiated between the two partners. ICMR-NIV are providing continuous support to BBIL for vaccine development. ICMR and BBIL will seek fast-track approvals to expedite vaccine development, subsequent animal studies and clinical evaluation of the candidate vaccine,” said ICMR official.

Don't Miss it Coronavirus update: The latest COVID-19 news for Wednesday May 27 | ABC News
Up Next Australia to put 300,000 under lockdown: Coronavirus live updates | News