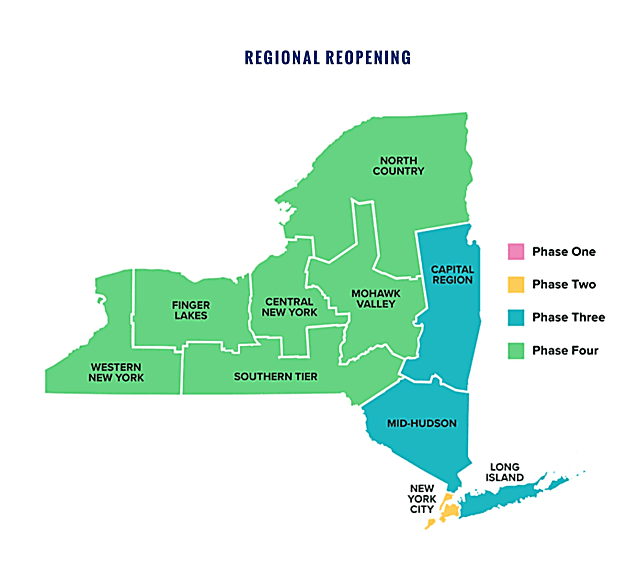 As New York City approaches Phase 3 of reopening its economy, all hands will be on deck to ensure that face coverings are being worn and social distancing is properly practiced amid the novel coronavirus (COVID-19) outbreak.

New York Gov. Andrew Cuomo said that State Police, the Department of Health, and State Liquor Authority will be on patrol to ensure that Manhattan residents continue practicing the methods put in place during the state’s phased reopening.

“They’re going to be looking all throughout the city to see if New Yorkers are complying. I’ve said to the local governments in New York, also on Long Island we have an issue, they have to enforce compliance.

“I don’t want to be a hard edge, but it’s the law and I need the local governments to do the compliance. I know there’s a lot going on in the NYPD now, but they have to enforce it.”

Cuomo said that with the weather warming up, and the continued good metrics in New York regarding the virus’ spread, some New Yorkers have grown lax in complying with the state’s mandates regarding COVID-19.

“That’s what brought us down and that will create a problem again.”

Cuomo said he is trying to gauge how bad the non-compliance is in the city, which is why he’s chosen to involve State Police, and other authorities.

“If the non-compliance is continuing, then we have to think about what we do on Phase 3 which New York City is supposed to enter on Monday,” he said. “If we already have a compliance issue, then opening up venues that will only further aggravate that issue would be a mistake.”

New York City is set to enter Phase 3 as of Monday, July 6, though it might be with certain new restrictions in place, including limited indoor dining, as health officials monitor the data coming from throughout the state and country.

A final determination on indoor dining in New York City is expected on Wednesday, July 1.

“Indoor dining across the country has shown to be problematic,” Cuomo said. “Tonight we’re going to be monitoring what’s happening with the compliance. I want to make a final decision tomorrow on the indoor dining because I want the restaurants to have notice one way or the other, and I want to get a snapshot of tonight what’s happening so I make an informed decision tomorrow.

Cuomo said he has been consulting with his neighboring governors in New Jersey and Connecticut as the metro New York region continues reopening the economy.

“I don’t want our state creating a problem for another state. But New Jersey is looking at the same issue and Gov. (Phil) Murphy, I spoke to, they have an issue on indoor dining,” Cuomo said. “He doesn’t want to go ahead with it at this point because he’s also seeing the federal spread and the lack of compliance. I said I’d make a decision tomorrow so I want to get a snapshot tonight.”

Don't Miss it Coronavirus Australia: COVID-19 restrictions will ease in NSW today
Up Next How Africa's universities fight the coronavirus and inequality | DW News