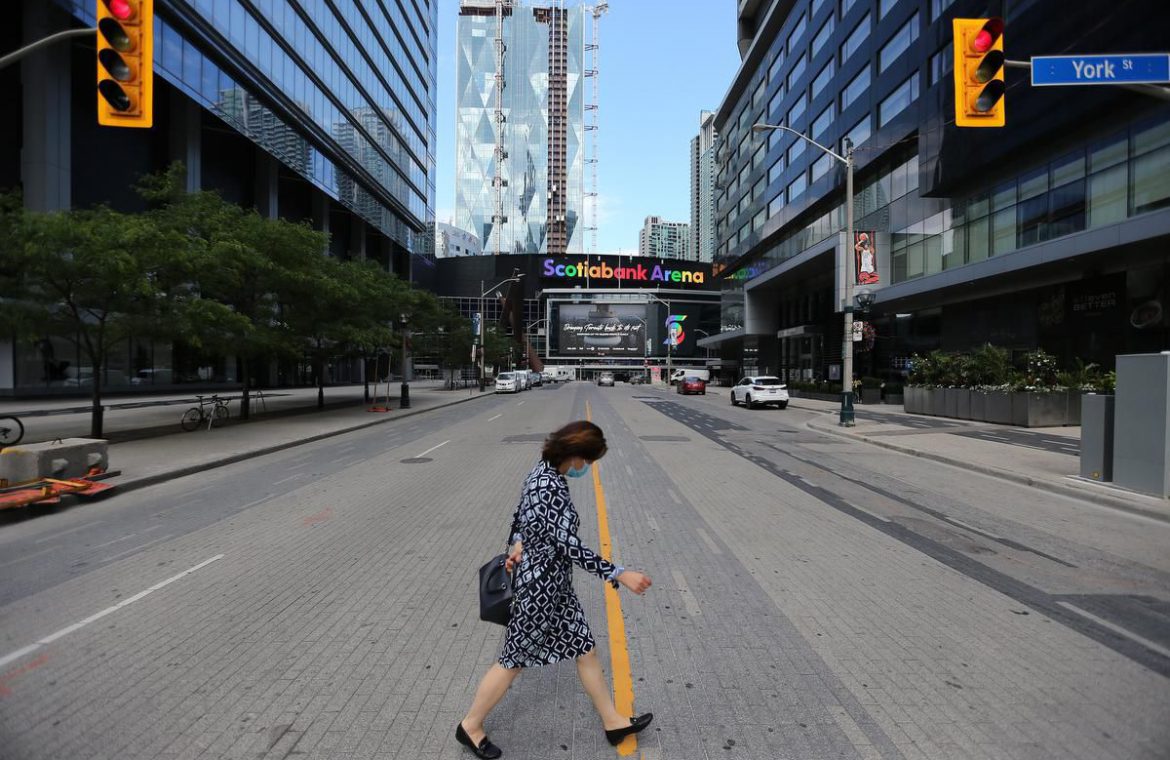 8:29 a.m.: If you look closely at this mosaic, you’ll see 3,025 photos selected from over 7,000 pictures filed by Toronto Star photographers since the newsroom was shut down by COVID-19 quarantine orders on March 17, 2020.

The Canada Day composite depicts Toronto teacher Meradith Black in a flag mask. These images were compiled by Visuals Editor Taras Slawnych, who assigned to photographers from his dining room table.

Click here to explore our interactive tool to zoom in and see the photos taken by Toronto Star photographers during the pandemic.

8 a.m.: Before all this, every Canadian had their own version of Canada Day. Maybe it was a barbecue, a fair, a parade. Maybe it was just a day off, finally. Maybe it was on Parliament Hill, or in your backyard, unless you didn’t have a backyard; then maybe you could join the crowd, all carrying little Canadian flags, to see the fireworks.

But this is the pandemic year, Star columnist Bruce Arthur writes, and our collective experiences have been atomized as we were kept apart, together. So now our most common Canada Day experience may be this: how much can you pretend that everything’s the same?

7:24 a.m.: India reported 18,653 new coronavirus cases and 507 deaths in the past 24 hours with June proving to be the worst month since the pandemic hit the country in late January. India’s total cases reached 585,493 on Wednesday, more than 400,000 of them reported in June alone. India’s health ministry said 17,400 people have died. Prime Minister Narendra Modi has expressed concern over negligence in maintaining social distance and wearing masks.

7:14 a.m.: South Korea is considering including religious facilities on the same list with nightclubs, hostess bars and karaoke rooms as “high risk” venues for the spread of COVID-19 following a slew of transmissions tied to church gatherings.

South Korean Prime Minister Chung Sye-kyun said during a virus meeting on Wednesday that more than 40% of the country’s newly confirmed infections over the previous three days have been traced back to places of worship.

He pleaded people to refrain from religious gatherings and criticized churches and other facilities for failing to implement proper preventive measures, such as requiring followers to wear masks and sit apart during services.

She said as of Tuesday there have been over 8,600 coronavirus cases in the state, with over a quarter of those cases identified in the past two weeks. The Oregon Health Authority said 207 people in Oregon have died from the disease.

The state of emergency declaration is the legal underpinning for the executive orders Brown has issued throughout the pandemic, including her orders on reopening Oregon, as well as orders related to child care, schools, and higher education operations.

Extending the state of emergency declaration allows those orders to stay in effect. She will review and re-evaluate each of her emergency orders every 60 days. Brown said this extension will last through Sept. 4.

7:05 a.m.: An Australian state leader has welcomed “some sense of stability” in numbers of new coronavirus cases detected daily in the nation’s second largest city as more than 300,000 residents prepare to be locked down for a month.

There were 73 confirmed cases in Melbourne in 24-hours to Wednesday, up from 64 reported on Tuesday but less than 75 on Monday.

Victoria state Premier Daniel Andrews says “it is pleasing that there is some sense of stability to these numbers. There is the beginning of some consistency here.”

He said a “significant concentration” of the new cases were in the 36 hot spot suburbs that will be locked down from Wednesday night until July 29 in a bid to halt the spread.

Thousands of officials conducted more than 20,000 tests in Melbourne since Tuesday, going door-to-door and through dozens of testing centres in the targeted suburbs.

7 a.m.: The number of people who have recovered from the coronavirus in Pakistan has surpassed 100,000, about 50% of total infections.

The virus has spread in Pakistan at one of the fastest rates in the world since February, and the deaths have jumped since May, when Prime Minister Imran Khan eased lockdown despite warnings from experts.

In Wednesday’s statement, the national command and control centre said 100,802 patients have recovered out of 213,469 confirmed cases. Pakistan recorded 41,33 more cases and 91 deaths in the last 24 hours.

6:50 a.m.: Tokyo Disneyland and DisneySea reopened after being closed for four months due to the coronavirus pandemic, with hundreds of visitors applauding as they were let in Wednesday.

The two parks have new guidelines, including limiting the number of entrants in three shifts to maintain social distancing.

No handshakes, hugging or photos taken with Mickey Mouse and other characters are allowed.

Though characters greet guests from afar, their signature parades and shows have been suspended to avoid crowds.

6:47 a.m.: A protest against Africa’s first COVID-19 vaccine trial was underway Wednesday as experts note a worrying level of resistance and misinformation around testing on the continent.

“In general, people in Africa know the diseases and want to protect each other,” he said. “In this case, the rumour mill has been dramatic.”

The trial that began last week in Johannesburg is part of one already underway in Britain of the vaccine developed at the University of Oxford. Some 2,000 volunteers in South Africa are expected to take part.

It’s important that vaccines be tested in Africa to see how they perform in the local context, professor of vaccinology Shabir Madhi, leader of the new COVID-19 vaccine trial in South Africa, told reporters and others in a webinar Sunday.

But the small band of demonstrators who gathered Wednesday at the University of the Witwatersrand, where the trial is based, reflect long-running fears among some in Africa over testing drugs on people who don’t understand the risks.

“The people chosen as volunteers for the vaccination, they look as if they’re from poor backgrounds, not qualified enough to understand” protest organizer Phapano Phasha told The Associated Press ahead of the event. “We believe they are manipulating the vulnerable.”

The virtual ceremony takes place this afternoon and will bring together people ranging in age from six to 66 to swear the oath and hear from the prime minister and other dignitaries.

Canada Day citizenship ceremonies are a hallmark of the holiday, but the COVID-19 pandemic has forced them online — since April 1, there have been over 1,000 virtual events.

Today’s event is also expected to highlight something many Canadians have learned during the pandemic: the crucial role immigrants play in staffing Canada’s health-care system.

Tuesday 9 p.m..: As of 8 p.m. Tuesday, Ontario’s regional health units are reporting a total of 37,111 confirmed and probable cases of COVID-19, including 2,720 deaths, up a total of 148 new cases since Monday evening, according to the Star’s latest count.

In just a month, the rate of daily infections has fallen by nearly half in Ontario. On June 1, the province was seeing an average of about 365 new cases per day; as of Tuesday, the daily average was down to 186.

Most of that decrease has come in Toronto, which has seen its daily average fall even more sharply than in the rest of the province, from 161 cases per day to 52.

Earlier Tuesday, the province reported that 213 patients are now hospitalized with COVID-19, including 42 in intensive care, of whom 34 are on a ventilator. All three totals are near the lowest the province has reported in data since early April. At their highest levels, more than 1,000 patients were hospitalized with the disease in Ontario, with as many as 217 ventilated.

The province says its data is accurate to 4 p.m. the previous day. The province also cautions its latest count of total deaths — 2,672 — may be incomplete or out of date due to delays in the reporting system, saying that in the event of a discrepancy, “data reported by (the health units) should be considered the most up to date.”