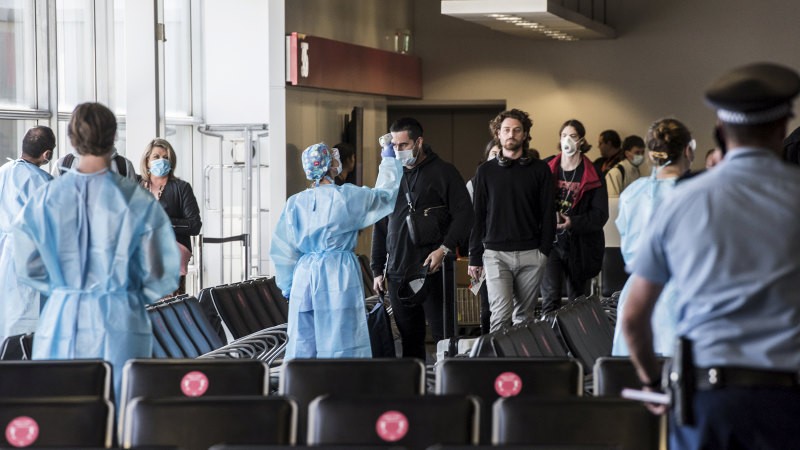 Mr Hazzard said he had asked the Victorian government to start screening people at Melbourne airports and train stations to ensure people from outbreak areas weren’t attempting to travel to NSW.

“It would help greatly,” he said.

Victoria recorded 77 new cases as well as its biggest single-day increase in community transmissions since the start of the outbreak. Lockdowns came into effect in 10 Melbourne postcodes where there has been a disproportionate increase in recent coronavirus cases.

NSW Health said there were eight new cases in the state, all returned travellers in hotel quarantine, taking the total to 3211.

NSW Chief Health Officer Kerry Chant said the Woolworths employee, who worked in the self-service check-out area, had flown into Melbourne from Bangladesh on June 11 and tested positive for SARS-CoV-2, the virus that causes COVID-19, on his fourth day in hotel quarantine.

The man was assessed on day 10 of his quarantine period and let out on day 14. He flew on Jetstar Flight JQ 510 on June 26 which left Melbourne at 1pm and arrived in Sydney at 2.25pm. He worked two shifts at Balmain Woolworths on June 28 and 29.

Passengers on a Jetstar flight from Melbourne are screened by NSW Health as they exit the aircraft at Sydney Airport.Credit:Steven Siewert

“The manager of the store asked him to have another test because he obviously had some sort of symptoms, and that test has come back positive,” Mr Hazzard said.

There is some confusion as to whether he was symptomatic at the time. There was a suggestion that he had told Victorian authorities his symptoms had subsided, but he told NSW Health authorities he had persisting symptoms.

Late on Thursday a Woolworths spokesman said the man was referred for a coronavirus test because of his travel history.

“The team member didn’t report or present with any symptoms of illness while on duty,” the spokesman said.

“The level of virus detected is very, very low and what this may reflect is just the tail end of the infection,” Dr Chant said.

“We are acting at this moment for the abundance of caution … it may be subsequently concluded that he is not infectious,” she said.

The Balmain store underwent a deep clean on Wednesday night and remains open.

“Any customers who shopped in our Balmain store on the weekend and feel unwell in the next two weeks should make contact with NSW Health,” the Woolworths spokesman said.

A woman who was symptomatic when she took a train from Melbourne to Sydney while still waiting for the results of her COVID-19 test has been quarantined and NSW Health is awaiting her test results.

“Our health staff found somebody with symptoms, who had actually been tested in Victoria, and then got on the train and came to Sydney,” Mr Hazzard said. “Now, that’s about as silly as it gets.”

It is unclear whether the woman breached the new public health order banning people from Melbourne’s hotspots from entering NSW under penalty of an $11,000 fine or six months’ jail time as she might have boarded the train before the order came into effect at midnight.

Police officers and NSW Health personnel were checking the identification of passengers from Melbourne to ascertain if they had breached the new public health order barring their entry.

Mr Hazzard repeated his warning to Victorians from hotspots to stay away from NSW.

NSW residents who visit the Melbourne suburbs under lockdown must self-isolate for 14 days on their return or face the same penalties.

But Mr Hazzard said the NSW border would not be closed to people from Victoria who do not live in the hotspots.

“NSW remains committed to keeping our borders open,” he said.

Premier Gladys Berejiklian said Victorians from outside the hotspots were welcome to travel to NSW.

“We also have to assume that the restrictions that Victoria is putting in place … will actually work and then people in those communities will stick to the rules,” Ms Berejiklian said.

The Premier said she had no doubt that NSW would get another spike in COVID-19 cases during the course of the pandemic.

“This could very well happen in NSW,” she said referring to Victoria’s outbreaks. “Please know that we are coming down hard on individuals and businesses to make sure everybody does the right thing, and I’ve got confidence that NSW citizens will continue to do that.”

A NSW Police representative confirmed on Thursday the force would seek a prohibition order in the Supreme Court on Friday morning in relation to a Black Lives Matter protest in Newcastle on Sunday.

A prohibition order does not prevent participants attending the protest but leaves them open to criminal sanctions, including for blocking roads and cars.

A NSW Police spokesperson said: “The NSW Police Force recognises and supports the rights of individuals and groups to exercise their rights of free speech and peaceful assembly; however, the first priority for NSW Police is always the safety of the wider community.”

NSW has one COVID-19 patient being treated in intensive care and 68 cases being treated by NSW Health in hospital or via the hospital-in-the-home scheme.

Don't Miss it Coronavirus morning headlines as pubs, cafes and restaurants are given a date to re-open outdoors (Thursday, July 2)
Up Next Rockland County Issues Subpoenas to Halt Coronavirus Spread After Party