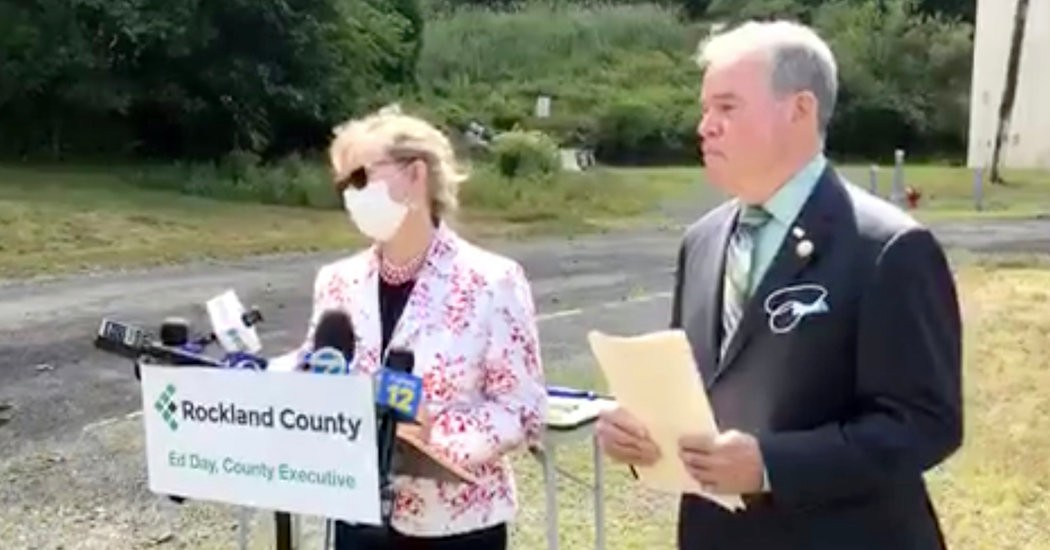 The event violated a state order in effect at the time that capped gatherings at 10 people in an effort to slow the coronavirus’s spread.

For local officials, that was just the start of the problem.

The party’s host, who was showing signs of being sick at the time, later tested positive for the virus. So did eight guests. County officials, eager to keep the cluster from growing, dispatched disease tracers to try to learn who else might have been exposed to the virus at the party.

The tracers hit a wall.

“My staff has been told that a person does not wish to, or have to, speak to my disease investigators,” Dr. Patricia Schnabel Ruppert, the county’s health commissioner, said on Wednesday. Of those being contacted about the party, she added: “They hang up. They deny being at the party even though we have their names from another party attendee.”

Frustrated by the response, county officials on Wednesday took the unusual step of issuing subpoenas to eight people who they believe were at the June 17 party. Those who do not comply and share what they know by Thursday will face fines of $2,000 a day, officials said.

In addition to the June 17 party, in West Nyack, officials said they had learned of two other recent large parties nearby where some guests might have overlapped, heightening the risk of a wider transmission. Both parties were in New City — one on June 20; the other on June 27.

Adding to the urgency of learning as much as possible about how widely the virus may have spread at the parties, officials said, was a tip from people who have cooperated about at least one more large party being planned in the area for the Fourth of July weekend.

“I will not allow the health of our county to be compromised because of ignorance, stupidity or obstinance, or anything else,” Ed Day, the Rockland County executive, said at a news conference, where Dr. Ruppert also spoke.

Tracking down everyone who has had contact with an infected person is considered crucial to containing the spread of an illness, but the effectiveness of such efforts can be limited.

In New York City, where 3,000 disease detectives and case monitors had been hired by last month, early data showed that only about two in every five people who had tested positive for the virus or were presumed to have it shared information about close contacts with tracers.

This is the second time in recent years that Rockland County officials have had to resort to subpoenas to compel cooperation from residents amid a push to halt a disease outbreak. A similar step last year in the face of a measles epidemic proved to be successful, officials said.

Both New City and West Nyack are in the Town of Clarkstown. George Hoehmann, the town supervisor there, said on Wednesday that town officials were unaware of a local uptick in virus cases until Mr. Day told him about those linked to the June 17 party only minutes before the county executive’s news conference.

Mr. Hoehmann also said that the town’s Police Department was prepared to enforce limits on gatherings or any other restrictions prompted by the virus outbreak, but that county officials had shared little information so far about what specifically they should be watching for.

What are the symptoms of coronavirus?

Common symptoms include fever, a dry cough, fatigue and difficulty breathing or shortness of breath. Some of these symptoms overlap with those of the flu, making detection difficult, but runny noses and stuffy sinuses are less common. The C.D.C. has also added chills, muscle pain, sore throat, headache and a new loss of the sense of taste or smell as symptoms to look out for. Most people fall ill five to seven days after exposure, but symptoms may appear in as few as two days or as many as 14 days.

Is it harder to exercise while wearing a mask?

A commentary published this month on the website of the British Journal of Sports Medicine points out that covering your face during exercise “comes with issues of potential breathing restriction and discomfort” and requires “balancing benefits versus possible adverse events.” Masks do alter exercise, says Cedric X. Bryant, the president and chief science officer of the American Council on Exercise, a nonprofit organization that funds exercise research and certifies fitness professionals. “In my personal experience,” he says, “heart rates are higher at the same relative intensity when you wear a mask.” Some people also could experience lightheadedness during familiar workouts while masked, says Len Kravitz, a professor of exercise science at the University of New Mexico.

I’ve heard about a treatment called dexamethasone. Does it work?

What is pandemic paid leave?

The coronavirus emergency relief package gives many American workers paid leave if they need to take time off because of the virus. It gives qualified workers two weeks of paid sick leave if they are ill, quarantined or seeking diagnosis or preventive care for coronavirus, or if they are caring for sick family members. It gives 12 weeks of paid leave to people caring for children whose schools are closed or whose child care provider is unavailable because of the coronavirus. It is the first time the United States has had widespread federally mandated paid leave, and includes people who don’t typically get such benefits, like part-time and gig economy workers. But the measure excludes at least half of private-sector workers, including those at the country’s largest employers, and gives small employers significant leeway to deny leave.

Does asymptomatic transmission of Covid-19 happen?

So far, the evidence seems to show it does. A widely cited paper published in April suggests that people are most infectious about two days before the onset of coronavirus symptoms and estimated that 44 percent of new infections were a result of transmission from people who were not yet showing symptoms. Recently, a top expert at the World Health Organization stated that transmission of the coronavirus by people who did not have symptoms was “very rare,” but she later walked back that statement.

What’s the risk of catching coronavirus from a surface?

Touching contaminated objects and then infecting ourselves with the germs is not typically how the virus spreads. But it can happen. A number of studies of flu, rhinovirus, coronavirus and other microbes have shown that respiratory illnesses, including the new coronavirus, can spread by touching contaminated surfaces, particularly in places like day care centers, offices and hospitals. But a long chain of events has to happen for the disease to spread that way. The best way to protect yourself from coronavirus — whether it’s surface transmission or close human contact — is still social distancing, washing your hands, not touching your face and wearing masks.

How does blood type influence coronavirus?

A study by European scientists is the first to document a strong statistical link between genetic variations and Covid-19, the illness caused by the coronavirus. Having Type A blood was linked to a 50 percent increase in the likelihood that a patient would need to get oxygen or to go on a ventilator, according to the new study.

How many people have lost their jobs due to coronavirus in the U.S.?

How can I protect myself while flying?

If air travel is unavoidable, there are some steps you can take to protect yourself. Most important: Wash your hands often, and stop touching your face. If possible, choose a window seat. A study from Emory University found that during flu season, the safest place to sit on a plane is by a window, as people sitting in window seats had less contact with potentially sick people. Disinfect hard surfaces. When you get to your seat and your hands are clean, use disinfecting wipes to clean the hard surfaces at your seat like the head and arm rest, the seatbelt buckle, the remote, screen, seat back pocket and the tray table. If the seat is hard and nonporous or leather or pleather, you can wipe that down, too. (Using wipes on upholstered seats could lead to a wet seat and spreading of germs rather than killing them.)

What should I do if I feel sick?

If you’ve been exposed to the coronavirus or think you have, and have a fever or symptoms like a cough or difficulty breathing, call a doctor. They should give you advice on whether you should be tested, how to get tested, and how to seek medical treatment without potentially infecting or exposing others.

Dr. Ruppert, speaking at the news conference, emphasized the continuing public health threat that the pandemic poses, even in areas like Rockland County, where the numbers of infections, hospitalizations and deaths are well below what they were in March and April.

The county has recorded just over 13,600 confirmed virus cases and 668 deaths since the outbreak began. As of Wednesday, official data showed, five people in the county were hospitalized with confirmed cases of the virus, and five others were suspected of having it.

As evidence for why precautions must still be taken, Dr. Ruppert cited the recent surge in cases in states that reopened more quickly than New York.

And while she urged those who had not cooperated with investigators so far to think of older relatives and younger siblings who might be more susceptible to the virus’s worst effects, she also had a message for the partygoers themselves.

“You may wish to be invincible, but you’re not,” she said. “None of us are against this dreadful disease.”

Don't Miss it Balmain Woolworths staff member tests positive to COVID-19, NSW records 8 new cases
Up Next One third of people who test negative for coronavirus actually have it, say Welsh doctors