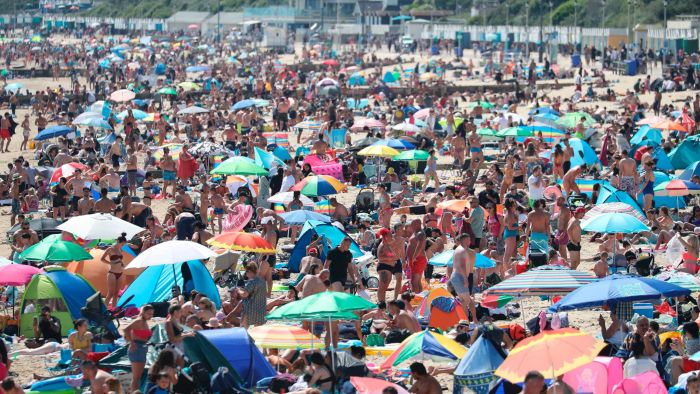 Britain will end coronavirus quarantines for people arriving from more than 50 countries, including Germany, France, Spain and Italy — but not the United States.

Meanwhile, North Korean leader Kim Jong-un has urged officials to maintain alertness against the coronavirus and has reaffirmed the country has no cases of COVID-19.

This story will be updated throughout Friday.

Friday’s key moments:English tourists cleared to travel without worry of a return quarantine

Millions of British tourists will soon be able to take summer holidays without having to quarantine upon their return, with England relaxing restrictions on people entering the UK from more than 50 countries.

Among the countries subject to the relaxed conditions from July 10 are Germany, France, Spain and Italy — but not the United States.

But those arriving from higher-risk countries will still have to self-quarantine for 14 days.

Prime Minister Boris Johnson’s Government debated for days about how to ease the quarantine rules.

Super Saturday is set to get underway in Britain this weekend.(Reuters: Hannah McKay)

Scotland, Wales and Northern Ireland, which set their own health policies within the United Kingdom, have not announced plans to lift the protections.

“There will be a list of 50 plus countries and if you add in the overseas territories, 60 something or other that we will publish later today,” Transport Secretary Grant Shapps said.

“Today marks the next step in carefully reopening our great nation.”

Reuters reported New Zealand was included, as were the Vatican and Britain’s overseas territories such as the Falkland Islands and Gibraltar.

The United States remains on the so-called “red list”.

“The US, from a very early stage, banned flights from the UK and from Europe so there isn’t a reciprocal arrangement in place,” Mr Shapps said.

The Government said it expected countries included on the quarantine-free list to reciprocate by relaxing their own restrictions.

The move to ditch the quarantine comes as England’s High Court is due to hear a legal challenge by British Airways, backed by low-cost rivals Ryanair and easyJet.

They argue the quarantine had no scientific basis and was unworkable.

Despite the warning, Mr Kim reaffirmed North Korea’s claim to not have had a single case of COVID-19, telling a ruling party meeting on Thursday the country had “thoroughly prevented the inroad of the malignant virus” despite the worldwide health crisis.

Describing its anti-virus efforts as a “matter of national existence”, earlier this year, North Korea shut down nearly all cross-border traffic, banned tourists and mobilised health workers to quarantine anyone with COVID-like symptoms.

Experts said the country’s self-imposed lockdown was hurting an economy already battered by sanctions over its nuclear weapons and missile program.

The Korean Central News Agency said Mr Kim had “stressed the need to maintain maximum alert without a slight self-complacence or relaxation” as the virus continued to spread in neighbouring countries.

The agency said Mr Kim sharply criticised inattentiveness among officials and violations of emergency anti-virus rules and warned a “hasty relief of anti-epidemic measures will result in unimaginable and irretrievable crisis”.

The North’s official Rodong Sinmun newspaper published several photos of Mr Kim at the meeting, which were the first state media images of him in weeks. Neither Mr Kim nor the ruling party officials who participated were wearing masks.

US breaks Brazil’s record for cases

The United States has reported more than 55,000 new COVID-19 cases in a single day.

Thursday’s figure was a new daily global record for the coronavirus pandemic, with infections rising in a majority of states.

The surge in coronavirus cases over the past week has put President Donald Trump’s handling of the crisis under the microscope and has led several governors to halt plans to reopen their states after strict lockdowns.

Coronavirus cases are rising in 37 out of 50 US states including Florida, which confirmed more than 10,000 new cases on Thursday.

That marked the state’s largest daily spike so far and a level that exceeded single-day tallies from any European country at the height of the outbreak there.

California, another epicentre, saw positive tests climb 37 per cent with hospitalisations up 56 per cent over the past two weeks.

Texas Governor Greg Abbott, who has previously resisted calls to make face masks mandatory, ordered for them to be worn in all counties with more than 20 coronavirus cases.

“In the past few weeks, there has been a swift and substantial spike in coronavirus cases,” Mr Abbott said.

The United States has now recorded nearly 129,000 deaths, nearly a quarter of the known global total.

Authorities are considering locking down more suburbs in Melbourne, where 66 new coronavirus cases have been reported.

Victorian Premier Daniel Andrews said suburbs with more than five cases and a high infection rate could be added to the 36 suburbs that have been locked down since Wednesday.

Authorities in Sydney said a man who recently tested positive had been working in a Woolworths supermarket in Balmain.

About 50 supermarket staff have gone into isolation as a result.

Health authorities have urged people who have visited the supermarket and show symptoms to be tested.

Prime Minister Boris Johnson is expected to urge people to act responsibly when pubs reopen this weekend, warning that businesses, livelihoods and the future of the whole economy depends on good behaviour.

Restaurants, museums, hotels and other businesses will also be allowed to open their doors from Saturday.

The much-awaited event has been dubbed “Super Saturday” in the media, sparking worries that after months cooped up indoors, some could get carried away and risk spreading COVID-19.

Many of the elements that define a pub will be missing when they reopen: with numbers limited, there will be no crowds, no standing at the bar and no live music. Venues will have to keep a record of customers in case of a virus outbreak.

Britain will also lift its COVID-19 quarantine requirement for people arriving in England from countries including Germany, France, Spain and Italy from July 10.

A full list of countries covered by the relaxation would be announced today.

Under the existing rules, travellers must self-isolate for 14 days on entering the country.

California closes down again as cases surge by almost 50pcSpace to play or pause, M to mute, left and right arrows to seek, up and down arrows for volume.WatchDuration: 1 minute 2 seconds1m 2s California Governor Gavin Newsom has rolled back re-opening economy as coronavirus cases soar nationwide

Surging cases in California prompted Governor Gavin Newsom to announce he was closing bars, theatres and indoor restaurant dining over most of the state just ahead of July 4 weekend to celebrate Independence Day.

“The bottom line is the spread of this virus continues at a rate that is particularly concerning,” Mr Newsom said.

Confirmed cases in California have increased nearly 50 per cent over the past two weeks, and COVID-19 hospitalisations have gone up 43 per cent.

Police in California will be on the lookout for people violating social-distancing rules over the July 4 weekend.(AP: Gregory Bull, file photo)

He said the state would draw from seven state police agencies to create roving “strike teams” to enforce state guidelines designed to slow the spread of the coronavirus.

Infections have been surging in many other states as well, including Florida, which recorded more than 6,500 new cases as counties in South Florida closed beaches to fend off large crowds that could further spread the virus over the weekend.

Sweden’s number of confirmed COVID-19 cases crossed the 70,000 mark on Thursday, while deaths rose by 41 to 5,411, according to the country’s health agency statistics.

Sweden recorded 947 new cases to put the total at 70,639 as expanded testing continues to show surges in daily new cases over the past month, eclipsing rates elsewhere in the European Union.

Meanwhile, deaths and hospitalisations have tumbled from peaks in April.

The country adopted a softer approach to fighting the new coronavirus, spurning a hard lock down and putting its pandemic strategy in the international spotlight.

Sweden’s death toll has been many times higher relative to the size of the population than that of its Nordic neighbours, where authorities took a stricter approach, but lower than in some countries that locked down, such as Britain, Italy and Spain.

India’s number of coronavirus cases passed 600,000 on Thursday with the nation’s infection curve rising and its testing capacity being increased.

A total of 17,834 people have died in India so far due to the virus, according to India’s Health Ministry.

The number of coronavirus cases in India has surged past 600,000.(AP: Rajanish Kakade)

More than 60 per cent of the cases are in the worst-hit Maharashtra state, Tamil Nadu state, and the capital territory of New Delhi.

However, the western beach of state of Goa, a popular backpacking destination, opened for tourism on Thursday with the state government allowing 250 hotels to reopen after more than three months.

Tourists will either have to carry COVID-19 negative certificates or get tested on arrival.

The state has reported 1,387 positive cases with four deaths.

Many industries and businesses have reopened since the country eased its strict lockdown in early June, and Indians have cautiously returned to the streets. Schools, colleges and movie theatres remain shuttered.

Djokovic COVID-free after more testing A number of players and staff who participated in Novak Djokovic’s tournament tested positive for COVID-19.(AP: Darko Vojinovic)

Novak Djokovic and his wife have tested negative for coronavirus, his media team said, 10 days after announcing they had contracted the disease.

The men’s world No.1 tested positive for the virus after playing in an exhibition series he organised in Serbia and Croatia amid the pandemic.

“Novak Djokovic and his wife Jelena are negative for COVID-19. That was shown by the results of the PCR (nucleic acid) tests that both had in Belgrade,” his media team said in a statement.

Both Djokovic and his wife had no symptoms and were in self-isolation in Belgrade since testing positive, the statement said.

The news comes amid a new spike of coronavirus cases in Serbia and the reintroduction of some restrictive measures, such as compulsory wearing of masks and social distancing.

Djokovic was the fourth player to come down with the virus after participating in the series; the others being Grigor Dimitrov, Borna Coric and Viktor Troicki.