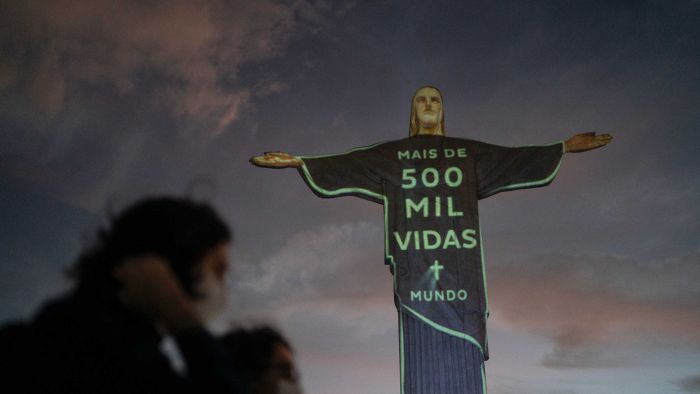 But why this perfect storm erupted in such a catastrophic way, can be better understood by looking at how its far-right leader, Jair Bolsonaro, handled the coronavirus crisis.

Nicknamed Trump of the tropics for his populist zeal and anti-science approach to government, Mr Bolsonaro has repeatedly downplayed the threat posed by COVID-19, touted unproven medical treatments and even attended anti-lockdown protests in person.

As a result, the crisis has played out just as experts had feared and it’s only about to get much worse.

Brazil has become the second member of an exclusive club nobody wants to join after reaching more than one million cases of the coronavirus.

Activists have dug up symbolic graves on Copacabana beach as part of a protest against the government’s handling of the COVID-19 pandemic.(AP: Leo Correa)

At the time of writing, infections had climbed to 1.4 million — second only to the United States — but health experts believe the actual count could be seven times higher.

If the country continues on this trajectory, its death toll will likely surpass that of its northern neighbour by August.

Coronavirus update: Follow all the latest news in our daily wrap.Brazil faces a tough road ahead

Health officials in the country are also dealing with a troubling new development.

Fatalities are also rising outside Brazil’s major cities and now account for about half of all daily deaths in the country.(Reuters: Adriano Machado)

The coronavirus initially came to Brazil through airports and ran rampant through its densely populated coastal cities.

But now the virus has mushroomed from the populous favelas of major coastal metropolises and has spread to inland cities and poor, rural communities.

Last week, 60 per cent of new cases were registered in smaller cities, according to health ministry data.

Fatalities are also rising outside major cities and now account for about half of all daily deaths in Brazil.

“The problem is only 20 per cent of the municipalities in Brazil have conditions to keep severe patients with intensive care units,” Rio-based pulmonologist Margareth Dalcolmo told the ABC.

“So, if you have those inland vectors or transmission or dissemination of the epidemics, we’ll have a new logistic challenge in terms of transportation of all these patients.”

The concern is two-fold.

Firstly, higher death tolls are inevitable in areas where medical care is non-existent.

But for those who can travel, the fear is also that the infected will make their way to the major cities for treatment, triggering a tsunami of new patients for hospitals already under siege.

Back in February, Dr Croda warned this could happen without strict social distancing guidelines.

In some densely populated areas in Brazil, such as the one pictured above, hundreds of families live in shacks packed tightly together and the people have to share three communal bathrooms and a kitchen.(AP: Leo Correa)

He developed a detailed policy for the Government, but it was fiercely rejected by Mr Bolsonaro and Dr Croda was forced to resign.

“It’s common in Brazil; several cities in the south already have this effect,” he said.

“In some cities which don’t have a lot of circulation of the virus, probably will have a big boomerang affect.”

Dr Croda warns that if Brazil were to continue along this path — with an increase in the number of cases and deaths — it is likely they will “surpass the United States in the next one to two months”.

Coronavirus has brought ‘tragedy upon tragedy’

Nurse Cristina de Andrade Souza has watched the medical catastrophe taking a grip of her country play out in real time.

“I know at least 10 people who have died from coronavirus — and I’m just one person. One,” she said, adding the “death rate is very, very high”.

“For those of us working in the healthcare system, we see it all in our day-to-day and among friends.

“Tragedy upon tragedy by families. We don’t see signs of it slowing or a break in the curve.”

Many have mourned family members and friends who have passed away from the virus.(AP: Andre Penner)

She’s not alone, with large swathes of Brazilians travelling from poorer inland communities to the large coastal cities for work each day.

“People are moving around a lot. Some are moving to receive treatment, others just to escape confinement,” Ms de Andrade Souza.

“It is very worrying because we will end up having no control of the virus.”

She has good reason to worry. The virus has reportedly killed Brazilian nurses at a faster rate than anywhere else in the world.

As of late May, the Federal Nursing Council said more than 15,000 nurses were infected with coronavirus, of which 137 had died.

“I have friends who were contaminated,” Ms de Andrade Souza said.

“Among those I work with here in Brazil, who work as medics and nurses, have a very high level of contamination because services and protective equipment are not offered to us.”

Authorities have started to ease some restrictive measures in place to curb the spread of COVID-19 in Brazil.(AP: Leo Correa)

Yet, despite the rising cases, Brazil’s major cities have moved to reopen businesses in an attempt to reboot their ailing economies.

With the unemployment rate having surged to 12.9 per cent, nearly 8 million Brazilians have now lost their jobs due to the pandemic.

However, it is likely the impact of a potential second surge of cases will complicate the process of reopening the economy.

While Brazil has captured global attention for its staggeringly frightening headlines, much of Latin America has also been under attack from the virus.

It has spread to every country in the region, which has recorded a tripling in cases over the past month.

The death toll in Brazil is thought to be much greater than the official toll.(Reuters: Sergio Moraes)

Peru is now fifth in the world for cases at nearly 300,000, while Chile comes in at sixth with 288,000, according to Johns Hopkins University.

And while Mexico has recorded fewer cases at more than 245,000, its positivity rate is staggeringly high — more than half of those tested are returning positive results.

“It’s not one culprit, or a culprit or a government,” infectious diseases expert Irene Bosch said.

“We were talking about huge social disparities in the structure of Latin American countries — that disparity is atrocious.

“The greatest amount of people with the least amount of resources — and that we inherited into the COVID-19 scenario, on top of that we have irresponsible government.”

The Venezuelan-born, Massachusetts-based biologist warned the world would never know the true extent of the virus’s reach in Latin America.

“It’s a structure that’s already ill — it’s very much unfair — speaking for a lack of democracy, but also a lack of good government and it’s just a fatal combination of those two,” Mr Bosch said.

“We have deaths as our outcome to measure the impact, but how much penetration COVID-19 has in different parts of Latin America will always remain unknown.”

As the southern hemisphere enters the depths of winter, these countries aren’t talking about a second wave.

Field hospitals have been built inside gyms and other structures to cope with the number of COVID-19 patients.(AP: Andre Penner)

They’re not even through the first, with most of Latin America still seeing its daily cases and deaths rise.

For Ms de Andrade Souza, who like many other Brazilians faces the threat of the coronavirus both at home and work, she no longer has hope her government will act.

“The Federal Government has been absent, that is the word: absent,” she said.

“Lots of political wrangling and gossip, should not be the focus. If our government doesn’t want to deal with it, it is an individual choice.

“One by one, we will get through this and get out alive.”