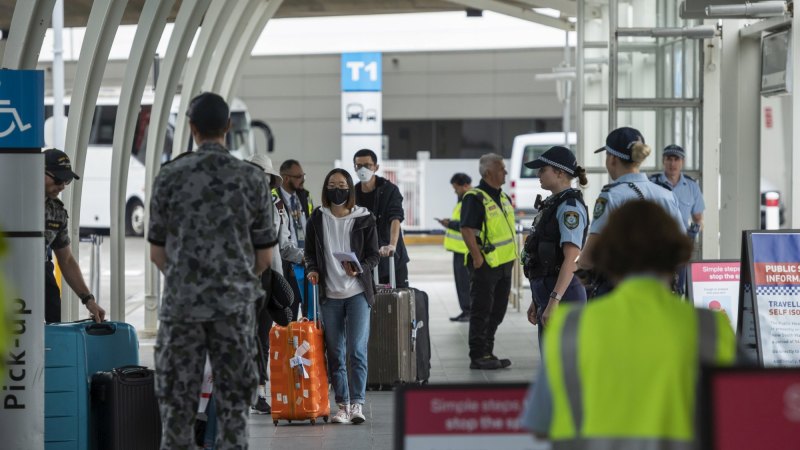 Professor Kelly said 70,000 people had been placed in hotel quarantine after arriving in Australia since the start of the pandemic.

“We have had very few times where that quarantine has failed. There has been a particular issue in Victoria,” he said.

Professor Kelly said the Australian Health Protection Principal Committee is now considering masks for hotspot areas in Victoria due to the high levels of spread through the community.

“We have not really seen this level of community transmission during this pandemic in Australia,” Professor Kelly said.

There have been just six cases of locally acquired transmission across NSW in the past four weeks, with the last community-spread case 10 days ago.

On Sunday, NSW recorded 14 new coronavirus cases, all of which were in hotel quarantine.

More than 18,000 tests had been carried out in the 24 hours to 8pm on Saturday and 69 people were currently in the care of NSW Health. One person is in intensive care, NSW Health’s Jeremy McAnulty said, but does not require ventilation.

“The virus is likely still circulating among people in the community with mild symptoms,” Dr McAnulty said. “As such, the risk of outbreaks and resurgence of cases remains.”

It comes the day after the federal government announced there would henceforth be a cap of 450 travellers per day arriving into NSW from overseas to allow hotels to cope with the influx.

Concerns were raised after The Australian reported quarantine hotel security guards were sleeping on the job, with fears an outbreak similar to Victoria’s could happen in Sydney.

More than 32,000 people in NSW have undergone the mandatory quarantine period since the public health order to do so was enacted in March.

“There have been no breaches of the quarantine order,” NSW Police said in a statement on Friday. “Further, the cooperation of the hospitality industry – particularly staff members within the hotels – throughout the operation has been exceptional.”

Nine public housing towers in hotspot areas have been put into what Mr Andrews characterised as a “hard lockdown” on Saturday night, to last at least five days.

Forty-one Melbourne suburbs are also under stage 3 stay-at-home restrictions, meaning people can leave their homes only for work or study, exercise, to shop for food, and for “care and compassion”.

“People in these postcodes are subject to stay-at-home orders as of July 4. A person who has been in a hot spot location in the past 14 days must not enter NSW, unless they are a NSW resident,” said Dr McAnulty.

“If a person who has been in a hotspot is already in NSW, they must self isolate for 14 days from the time they were last in the hot spot location,” he said.

“People who have travelled to any part of Melbourne must not visit sensitive settings, including aged-care facilities and hospitals.”

Sally Rawsthorne is a Crime Reporter for The Sydney Morning Herald.

Sarah is a journalist for The Sydney Morning Herald.