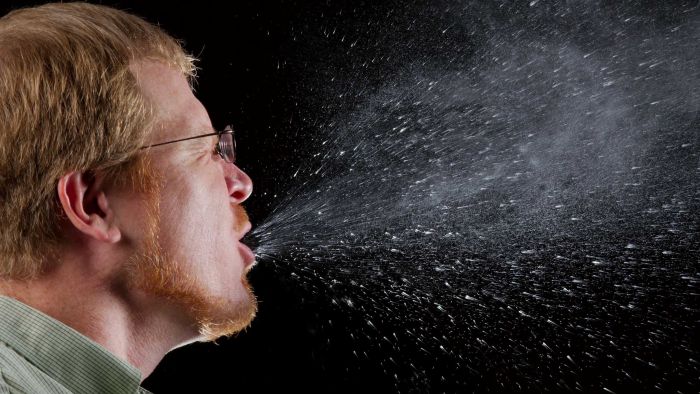 The World Health Organisation (WHO) has downplayed airborne transmission of COVID-19 since the pandemic began but now more than 200 scientists are making a plea for action, warning people they aren’t as protected as they may think.

The WHO’s view has so far been that COVID-19 is spread predominantly through large respiratory droplets — the ones that come flying out of our mouths when we cough, sneeze and speak but then quickly fall to the ground.

The risk of airborne transmission has not been recognised by the WHO, except in some health care settings.

But now 239 scientists from 32 different countries and many different areas of science (including virology, aerosol physics and epidemiology) have penned an open letter urging the WHO to change their advice.

“We ignore COVID-19 airborne spread indoors at our peril,” the scientists say.

If their plea is heard, the ways in which the world attempts to control the virus could change dramatically.

The letter, led by internationally recognised air quality and health expert Lidia Morawska from the Queensland University of Technology, makes an appeal for public health organisations like the WHO to address the “overwhelming” research on the dangers of microdroplets.

These are the very tiny respiratory particles (of 5 microns or less in diameter) that you emit when you breathe, speak, laugh, sing and so on.

Because these particles are tiny and light, they can remain suspended in the air and then inhaled by someone else, a bit like cigarette smoke.

This is in contrast to larger, heavier respiratory droplets, which fall quickly to the ground.

There is growing evidence that small droplet (airborne) transmission is a significant route of infection indoors.(Supplied: Airborne transmission of SARS-CoV-2 By Lidia Morawska)

Professor Morawska says scientists have demonstrated “beyond any reasonable doubt” that those microdroplets pose a risk beyond 1 to 2 metres, potentially making the 1.5 metre social distancing rule inadequate.

While scientists don’t know exactly how long microdroplets can linger in the air, it could be hours.

“We are concerned that people may think they are fully protected by following the current recommendations, but in fact, additional airborne precautions are needed to further reduce the spread of the virus,” Professor Morawska says.

What the scientists want

The signatories of the letter have recommended three key ways to mitigate the risk of airborne transmission of COVID-19.

“These are practical and can be easily implemented and many are not costly,” Professor Morawska says.

What does the research say?

The scientists say that airborne transmission appears to be the only “plausible explanation” for several superspreading events.

Of particular importance was a study (yet to be peer reviewed) of a restaurant in Guangzhou, China, where 10 people from three different families became infected but none of the waiters or 68 other customers did.

Professor Morawska, who was not involved in the study, says the authors observed no evidence of direct or indirect contact between people, but showed how the transmission occurred through the air in a crowded and poorly ventilated space.

In that restaurant, there was no outdoor air supply apart from the brief and infrequent opening of a fire door.

The three families were sitting within the blue cloud of aerosols.(Supplied: medRxiv)

The study concluded that aerosol transmission had some role in this outbreak, as some customers who became infected were sitting as far as 4.6 metres apart and we know that even a cough only pushes large droplets around 2 metres away.

Many studies conducted on the spread of MERS and influenza have also proved the risk of aerosol transmission, Professor Morawska said.

For example, 72 per cent of the 54 passengers on a plane in Alaska which had no ventilation for 4.5 hours contracted influenza in 1977.

“There is every reason to expect that SARS-CoV-2 behaves similarly, and that transmission via airborne microdroplets is an important pathway,” the open letter says.

What does the WHO say?

In the latest interim guidance, the WHO said current evidence suggests COVID-19 is primarily spread through large droplet transmission when people are within 1 metre of each other.

It also warns that transmission may occur through fomites (inanimate surfaces or objects) however experts believe that risk is quite low.

Today the Lancet published commentary from a microbiology expert in the US who claimed the risks of surface transmission had been “exaggerated” and based on studies with little resemblance to real life.

The WHO says aerosol transmission may only occur during aerosol-generating procedures in healthcare settings, for example intubation (inserting a tube through a person’s mouth and into their airway) or resuscitation.

The WHO says more research is required to determine the risk of airborne transmission in other environments.

“High quality research including randomised trials in multiple settings are required to address many of the acknowledged research gaps,” the WHO said in their latest advice on masks.

Euan Tovey, who specialises in the role of aerosols in disease transmission, is one of the 11 Australian scientists who signed the open letter.

He says the WHO’s stance on transmission is based on “old fashioned thinking about the behaviour of particles”.

Professor Tovey says this was reflected by their official recommendation of 1 metre social distancing.

“One metre is pretty close, particularly indoors … and we think a lot of transmission comes from smaller particles concentrated within about 1 metre in a room,” he said.

Health in your inbox

Get the latest health news and information from across the ABC.

Why does it matter

The scientists acknowledge there are still parts of the puzzle of evidence missing when it comes to airborne transmission but say we still have much to learn about large droplet transmission too.

They say until we have a vaccine, all routes of transmission must be interrupted and if the importance of ventilation isn’t recognised, there will be “significant consequences”.

“People may think that they are fully protected by adhering to the current recommendations, but in fact, additional airborne interventions are needed for further reduction of infection risk,” the scientists say.

They also believe the matter is of “heightened significance now” as countries push ahead with re-opening measures.

‘It is Time to Address Airborne Transmission of COVID-19’ will be published in Clinical Infectious Diseases journal tomorrow.