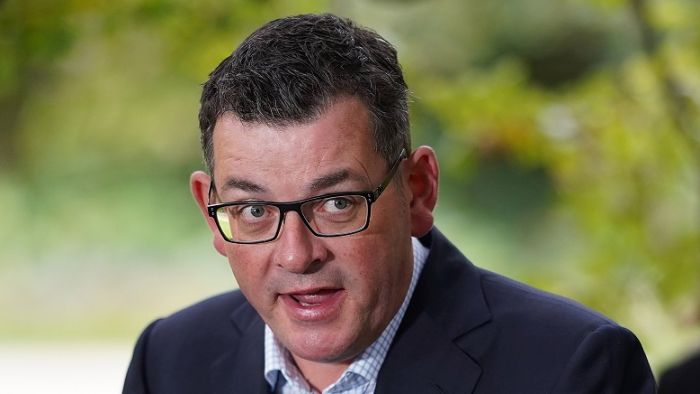 The Victorian border with New South Wales will be closed from Wednesday after the state recorded its largest single-day increase in coronavirus cases since the pandemic began.

Key points:The border closure will take effect from 11:59pm on TuesdayThere will be a permit system in place for people who need to travel into NSWThe Chief Health Officer says there are now a total of 53 cases connected to the public housing towers outbreak

Victorian Premier Daniel Andrews announced the closure at a press conference this morning where he said his state had recorded a further 127 new coronavirus cases and a man in his 90s had died in a Victorian hospital.

Health Minister Jenny Mikakos later tweeted a man in his 60s also died from coronavirus in hospital this morning.

The two deaths bring the state’s coronavirus death toll to 22 and the national total to 106.

The three leaders agreed closing the border would be the “smart call” at this point in time, Mr Andrews said.

“That closure will be enforced on the New South Wales side, so as not to be a drain on resources that are very much focused on fighting the virus right now across our state,” Mr Andrews said.

Ms Berejiklian said the border would shut to Melbourne residents in the next 24 hours then extend to all Victorian residents from 11:59pm tomorrow.

Victorians in NSW would be free to return to Victoria.

The decision follows a weekend that saw Victoria record 108 new cases on Saturday — the second highest increase in the state in a single day since the pandemic began — and lock down nine public housing estates in inner Melbourne in a bid to contain an outbreak of the virus.

Another 74 coronavirus cases were recorded in the state yesterday.

Coronavirus live news: Follow all the latest information in our blog.

The Premier said of today’s 127 new cases, 16 were detected in the public housing towers that have been locked down.

An additional 10 infections from earlier numbers have been linked to the towers, bringing the total in the outbreak to 53 cases.

Space to play or pause, M to mute, left and right arrows to seek, up and down arrows for volume.WatchDuration: 2 minutes 3 seconds2m 3s Mr Andrews says he expects all of the residents of the locked down towers to be tested.

In Saturday’s announcement the Premier said the “hard lockdown” imposed on the towers would last for at least five days, but “detention order” notices delivered to the residents said it would run for 14 days.

Mr Andrews said the length of the lockdown could be reassessed.

“Once all residents are tested we’ll have more options based on data, and hopefully that means we can have a different set of rules that are not quite so hard in terms of the hard lockdown that we have put in place,” he said.

About 400 tests have been conducted in the towers so far, Mr Andrews said.

The Premier said as soon as all the residents got tested, he would be able to make decisions about how long the lockdown would last.(AAP: David Crosling)Permits for border communities but no holidays allowed

The border closure is likely to be an unwelcome development for some residents in regional border communities where people regularly cross the Murray River to work or access health services.

Mr Andrews said there would be a permit system for people who needed to cross the NSW border.

“There will be a facility for people who live on those border communities to be able to travel to and from for the purposes of work, the purposes of the essential health services they might need,” he said.

However he said going on holidays would “not be an acceptable reason” to cross the border.

Mayor of Victorian border city Wodonga, Anna Speedie, said implementing the permit system was going to be “incredibly challenging” for residents in the area.

There are 31 Victorians with coronavirus in hospital, five of whom are in intensive care, Mr Andrews said.

Professor Sutton said a “significant number” of new cases were in postcodes next to to hotspot areas.

The Premier has urged Victorian residents to get tested.(ABC News: Patrick Rocca)

“There’s significant spillover and so to use the bushfire analogy: there are literally spot fires adjacent to those restricted postcodes,” he said.

“But people are absolutely being engaged in those areas so there’s lots of doorknocking, there’s lots of testing that’s occurring and so we’re picking up the cases in those adjacent postcodes, but they’re not only in those restricted ones.”

Mr Andrews said it had been a record weekend in terms of testing, with 25,000 tests completed on Sunday and more than 952,000 done since the start of the pandemic.