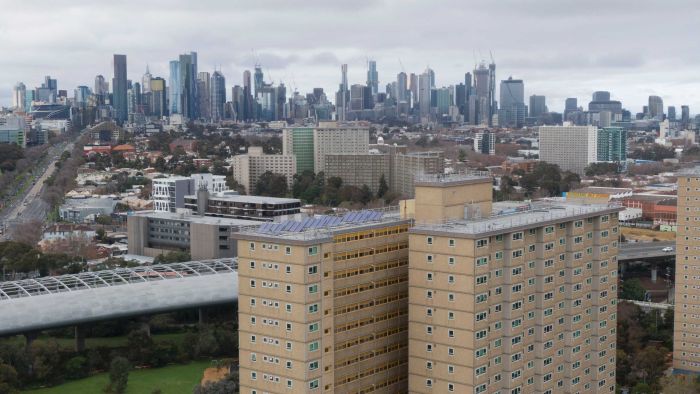 Nine Melbourne public housing estates are in their third day of a “hard lockdown”, brought about by fears coronavirus has the “explosive potential” to spread within the units.

Victoria’s Chief Health Officer Brett Sutton said the measures were in place because the environment was “desperately challenging”.

That’s because of a range of factors, like density, cleanliness and the jobs of many people living inside.

We know one of the biggest weapons in stopping the spread of coronavirus is keeping our distance, and that the virus has more chance of transmission indoors.

Each one of the Melbourne tower blocks is home to hundreds of residents living in small units without balconies.

“Those towers have a large concentration of people in a small area,” acting Australian Chief Medical Officer Paul Kelly said on Sunday.

“They are vertical cruise ships, in a way.

“And so we have to take particular notice and particular attention to make sure that the spread is minimised and that people are protected.”

Sharon Lewin, leading infectious diseases expert and the director of the Doherty Institute, said tightly-packed apartment blocks could be a “recipe for transmission”.

“When you get very dense housing, it becomes very hard to physically distance and stop any spread,” she told ABC Radio Melbourne.

Advocates have pointed to this as a reason there should be more public housing.

Residents say they have concerns about these towers in particular

On Sunday, 27 cases had been detected across the nine towers in Flemington and North Melbourne, but Professor Sutton said he expected there would be more diagnosed in coming days.

That’s the big reason behind the lockdowns — authorities are concerned about people who may be “incubating” the virus.

As well as the problems faced by residents of an apartment block in containing the spread, tenants have told the ABC about broken lifts making it “impossible” to safely distance.

The units have no balconies and windows that only open a small amount.(AAP: Daniel Pockett)Read more about coronavirus:

Melissa Wehan, who lives in one of the Racecourse Rd buildings in Flemington, told the ABC it was “inevitable” the virus would spread in her block.

She said there was a lack of hand sanitiser around the building, including in communal spaces.

“Our lifts only hold — if we follow social-distancing instructions — two people at a time. There’s 180 apartments in every building, nine flats in every floor,” she said.

Other tenants have expressed concern about the lack of information in languages other than English.

“You can be assured that the deep cleaning both of the common areas, the lifts and indeed the common walkways has been very significantly ramped up since the start of the COVID virus, for all of the obvious reasons of the potential vulnerability of our tenants,” he said on Sunday.

He said he had also asked his department to “ensure that we have got all of the appropriate language information in place”.

The Doherty Institute’s Professor Lewin said while the physical environment was one factor, it was just part of the picture.

“A lot of people in these housing estates in Victoria particularly, are in work that’s essential, so they’re often more likely to be exposed to infection,” she said.

“You’re more in touch with the public if you can’t work from home, so exposure is probably a big risk factor here.

Four of the affected buildings are next to each other in Flemington.(ABC News: Simon Winter)

And if people are living with larger family groups, they’re more likely to bring the virus home.

But authorities have been careful to not lay blame on the residents of the towers.

“It’s not about the people who are there, it’s about the entire environment and the way that people interact and the issue of how easily this virus spreads,” Professor Sutton said.

Another potential factor is that the virus is known to last longer on surfaces with lower humidity and less sunlight — so a Melbourne winter could play a part.

Residents of public housing are often immigrants, on low income or living with a disability.

“The first priority here is to find every case in those towers so that we don’t have an explosion of infections in a highly vulnerable community and very high rates of hospitalisations and deaths because of the background health status of a large number of people in these towers,” she said.

The lockdown will last for at least five days, which authorities are hoping will be enough time to test all 3,000 residents and process the results.

It could then be extended for longer.

Under the “detention directions” given to residents, the state also has the power to detain people for a further 10 days if they decline to be tested.

Mr Andrews said that was because authorities would have to “assume you are positive”.

Some residents felt unfairly targeted by the sudden lockdown and were left unprepared and confused when police arrived to enforce the new restrictions.

Professor Sutton said the “early, if imperfect control” was key to getting on top of the virus and preventing deaths.

He said without the lockdown, the virus “would have spread beyond these towers”.

Meanwhile, cases outside of those towers are continuing to climb around Melbourne, with tens of new infections recorded each day.

Residents in towers who need access to support and assistance can call the Government’s Housing Call Centre on 1800 961 054.

The health department’s coronavirus hotline can be called by anyone in Victoria on 1800 675 398.