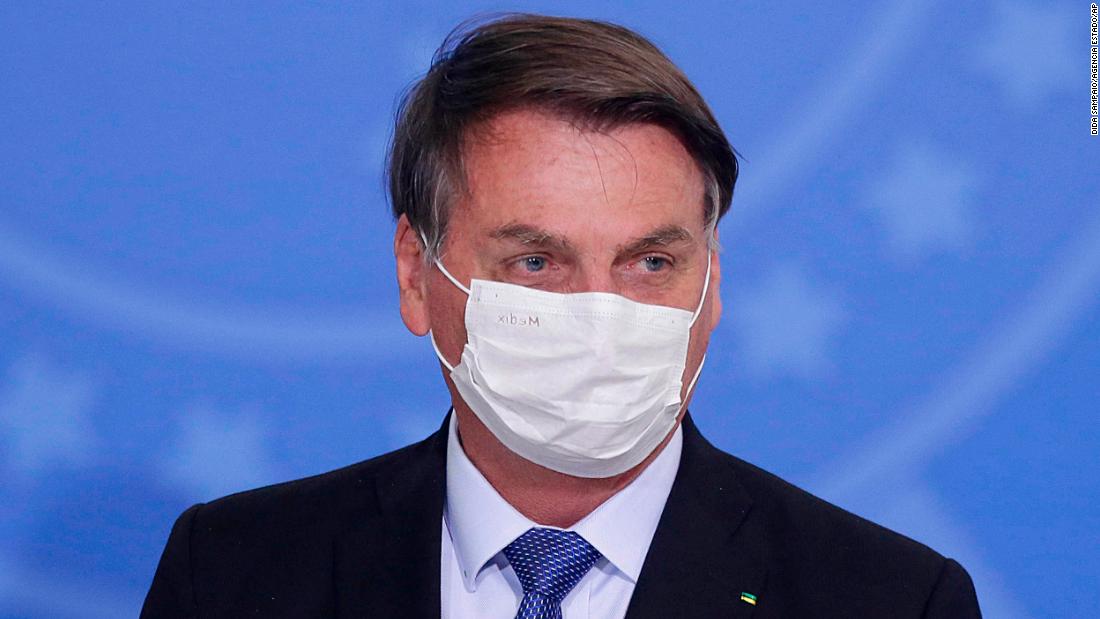 Bolsonaro himself announced the result, speaking on Brazilian TV channels Tuesday. “Everyone knew that it would reach a considerable part of the population sooner or later. It was positive for me,” he said, referring to the Covid-19 test he took Monday.

“On Sunday, I wasn’t feeling very well. On Monday, it got worse when I started feeling tired and some muscle pain. I also had a 38-degree [Celsius] fever. Given those symptoms, the presidential doctor said there was suspicion of Covid-19,” Bolsonaro said, adding that he then went to hospital where scans of his lungs “came back clean.”

Earlier on Tuesday, Bolsonaro told CNN affiliate CNN Brasil that he had been treated with hydroxychloroquine and azithromycin as he awaited the result of his fourth Covid-19 test in four months. Hydroxychloroquine, though enthusiastically boosted by both Bolsonaro and US President Donald Trump, has not been proven as an effective treatment for Covid-19.

Bolsonaro nevertheless credited the controversial antimalarial drug for his well-being on Tuesday. “I am feeling very well. I believe that the way they administered the hydroxychloroquine on, the effect was immediate,” he said.

He also acknowledged the life-threatening risk posed by a virus that he has in the past dismissed as a “little flu.” “We know the fatality of the virus for those of a certain age, like me, above 65, as well as for those with comorbidities, diseases, other issues. In those cases the virus could be decisive and lead to death — everyone knew that.”

Bolsonaro had reassured supporters on Monday outside the presidential palace in Brasília that he had taken a test and his lungs were “clean,” following media reports that he had a fever. Wearing a mask, he warned people to not get near him. “You can’t get very close [to me], OK? Recommendation for everyone,” he said.

‘I thought I had contracted it already’

Bolsonaro has previously appeared in public and at rallies without a face mask, even hugging supporters.

“I have to admit, I thought I had gotten it earlier, considering my very dynamic activity in the face of the people. And I can tell you more, I am the President and I am on the front line, I don’t run away from my responsibility nor do I shy away from the people,” he said on Tuesday.

“Because of my contact with the people I thought I had contracted it already and not noticed it, like the majority of the Brazilian population that contracts the virus, and doesn’t know,” he continued.

Brazil is second only to the United States in numbers of coronavirus infections and deaths. More than 65,000 people have died of the virus in Brazil, according to figures released by the country’s health ministry on Monday, and 1,623,284 cases have been confirmed so far.

Coronavirus tests remain hard to come by in the country and some local experts say the real number of people infected could be 12 to 16 times higher.

As Brazil’s pandemic ballooned over recent months, Bolsonaro has consistently encouraged the country to reopen, and has criticized local governments’ efforts to stamp out the virus through social distancing measures, such as quarantine and shelter-in-place orders.

“Our life has to go on. Jobs should be maintained,” Bolsonaro said in the still-early days of the pandemic, during a March 24 speech broadcast on national television and radio. He has maintained that position, arguing that the economic fallout of lockdown could be worse than the virus itself.

Last month, a court ordered Bolsonaro to wear a mask or face a fine. That order was later overturned.

Days after attending an event at the US Ambassador’s residence

Bolsonaro has previously tested negative for coronavirus in at least three separate examinations. Those tests were administered between March 12 and March 17, after Bolsonaro returned from a bilateral meeting with US President Donald Trump in Florida and many in his entourage tested positive.

This week’s positive result comes just days after he attended a July 4th commemoration event with the US Ambassador to Brazil, Todd Chapman. According to a photo posted to the President’s official Facebook page, Bolsonaro was at the Ambassador’s residence with Chapman for the event.

Images from the gathering show Bolsonaro not wearing a mask or observing social distancing. In one picture, he stands next to several US and Brazilian officials, including Chapman, none of whom was wearing a face covering. Chapman stood directly next to Bolsonaro in the photo, with his arm around the president. Brazil’s foreign minister, Ernesto Araújo, was pictured the other side of Bolsonaro.

Chapman also shared an image of himself next to Bolsonaro on his official Twitter account, writing that he was “honored” to receive the Brazilian president on July 4th.

CNN has called the US Embassy in Brasília and contacted the US State Department for comment on whether the ambassador or other officials have been tested for Covid-19.